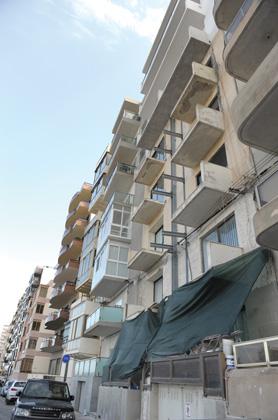 Properties with a seaview in Sliema commanded an average of €172 a day for short-lets in August, according to a survey of online booking sites carried out by property management company Casa Rooms.

Properties without a seaview in Sliema are being offered at an average of €113 per day.

Properties in other areas commanded lower prices, with Qawra at the bottom of the range surveyed, at €81 per night.

However, Qawra also had the best occupancy levels – 81 per cent.

When the occupancy levels are factored in, it equates to monthly revenue of €2,820 for Sliema as a whole, and €1,720 for Buġibba.

The properties analysed were all capable of hosting four to six people, and had internet and air-conditioning. The survey looked at properties in Sliema, Valletta, St Julian’s, Qawra and Buġibba.

The survey was conducted by analysing the properties listed on specialist websites holiday­letting.co.uk, airbnb.com and homeaway.com. The sites list 1,200, 1,500 and 700 properties in Malta respectively, with Airbnb offering a mix of entire properties (940), private rooms (413) and shared accommodation (62).

Tourist zones are clearly the most popular. The survey found that a third of all the properties listed on holidaylettings.co.uk were in Sliema or St Julian’s, with 18 per cent in St Paul’s Bay and 15 per cent in Mellieħa.

Last October, The Sunday Times of Malta carried a story about Airbnb and noted that it had 813 properties listed. However, dozens had been taken down from the website after it was pointed out that not all these properties were licensed to host visitors – and that many did not declare their rental income.

The Malta Tourism Authority can issue fines of €2,329 and the Courts of Justice fines from €1,165 up to €23,293. The numbers are clearly creeping back up again.

Thomas Cremona of Casa Rooms said that before deciding on a price, landlords should analyse the range for that locality.

“A property situated outside a key location may need to be priced towards the lower end of that price range in order to compete with prime locations,” he said. He also warned that, once listed, it was important to monitor queries.

“Internet bookings engines often use response time of a first enquiry as an attribute ­affecting the listing ranking,” he advised.

“It is imperative that a property manager is able to optimise the use of booking engines in order to adequately satisfy the rising demand for residential unit accommodation and generate a regular stream of income from the rental unit.”