The bastions of Mdina seem to be the setting for a battle scene once again.

The dissent, this time round, concerns the rehabilitation of the ditch gardens, now being converted into a recreation park, which has left environmentalists very unimpressed.

Until recently, the Mdina ditch was an underutilised ground that was inaccessible to the public, which the Rural Affairs Ministry has tried to change.

However, the plan has failed to convince some people.

“This is the work of architects with no background in environmental management. This is vandalism,” said Alfred E. Baldacchino, former assistant director at the Malta Environment and Planning Authority’s environment directorate.

The work includes the uprooting of more than 270 citrus trees lining the bastion walls.

About 150 will be replanted a couple of metres across the ditch and the remaining trees will be relocated to Buskett. 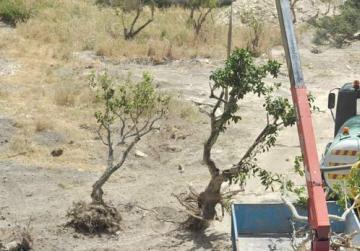 “This is not the right time for uprooting. We are in spring, blossoming time. It is a trauma for the trees. There is no guarantee they will survive,” said Mr Baldacchino.

Similarly, environmentalist Antonio Anastasi said on Facebook that if the uprooting had to happen, it should have been done without removing all the trees’ foliage.

Mr Baldacchino questioned the reason for moving them only by a couple of metres, calling it a “sheer waste of money”. The estimated value of the project – to be completed this year – is €1,200,000.

On site, a crane was uprooting the trees to loud pumping music.

“Look at that, all the roots of these citrus trees are sawn off with a chainsaw so that they fit in the new hole. They should at least make the hole bigger,” he said.

The Rural Resources Ministry said any protected species “will be left in place” and the design of the paving will work around them.

A spokesman explained the trees being transplanted to the other side of the counterscarp were being moved to “expose the scale and majesty of the bastions”.

Mr Baldacchino pointed out that citrus trees did not grow tall and could not obstruct the view of the bastions. However, he also noted that, before being uprooted, the trees were being pruned hastily.

“When you prune, trees ‘weep’. You need to coat them immediately to protect them from insects,” he explained.

He also believes that the project does not embrace Maltese biodiversity. “Turf, for example, is not part of the Maltese ecosystem and it’s very expensive to maintain because it needs a lot of watering. We need gardens that highlight the biodiversity of the place.

“Why are we just recreating a Victorian garden?”

The government insists the project includes an “intensive water management exercise” through a water catchment on St Paul’s bastion.

“All the water received during the last year has been diverted toward an existing reservoir in the courtyard of Vilhena Palace,” a ministry spokesman said.

“This will serve as one of the backup reservoirs for the main reservoir behind the counterscarp in the ditch and may be replenished by bowser during dry seasons.”

The project proposes to collect the greater part of the rainwater run-off in shallow reservoirs that have been creatively designed by taking advantage of the difference in the levels of the grounds.

A Mepa spokesman said all permits were in hand and continuous archaeological monitoring was being carried out during the works.

In the meantime, a petition against the pruning of trees – Save Malta’s Trees – sponsored by columnist Pamela Hansen is doing the rounds online and has already garnered more than 200 signatures.