The fall of the Berlin Wall 25 years ago, heralding the end of the Cold War between East and West, showed the world “dreams can come true” and should inspire people trapped in tyranny everywhere, Chancellor Angela Merkel said yesterday.

Festivities to mark the anniversary have drawn more than 100,000 Berliners and tourists to the centre of the once-divided city. Many wandered along a 15 km former “death strip” where the Wall once stood, and 7,000 illuminated helium balloons were perched 3.6 metres high on poles – matching the height of the barrier built in 1961 by Communist East Germany.

Merkel, a young scientist in Communist East Berlin when she got her first taste of freedom on November 9, 1989, said in a speech that the Wall’s opening in response to mass popular pressure would be eternally remembered as a triumph of the human spirit.

“The fall of the Berlin Wall showed us that dreams can come true – and that nothing has to stay the way it is, no matter how high the hurdles might seem to be,” said Merkel, who is now 60 and has led united Germany since 2005. 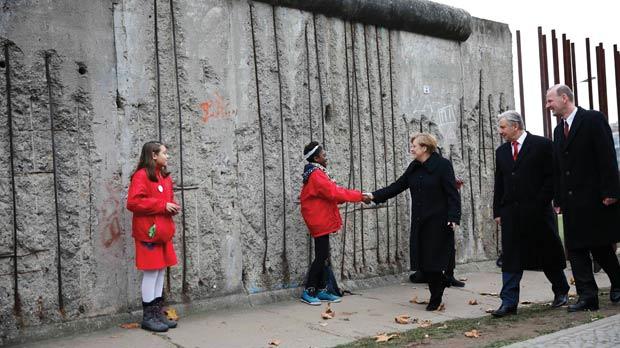 German Chancellor Angela Merkel, Berlin Mayor Klaus Wowereit and Director of the Berlin Wall Foundation Axel Klausmeier (right) shake hands with children symbolising the so-called Mauerspechte (‘wall peckers’, people who chipped the wall with hammers) during a ceremony marking the 25th anniversary of the fall of the Berlin Wall at a memorial in Bernauer Strasse, in Berlin, yesterday. Photo: Reuters

“It showed that we have the power to shape our destiny and make things better,” she said, noting that people in Ukraine, Syria, Iraq and elsewhere around the world should feel heartened by the example of the wall’s sudden demise.

“It was a victory of freedom over bondage and it’s a message of faith for today’s, and future, generations that can tear down the walls – the walls of dictators, violence and ideologies.”

Germans, with few anniversaries to fete after an earlier 20th century record of belligerence and war, have latched onto memories of the peaceful East German revolution that felled the wall as a bright, shining moment in their history.

But even the date November 9 bears historical burdens, as Merkel noted. It was also the day in 1938 of the anti-Jewish pogrom Kristallnacht, or “Night of Broken Glass”, when Nazis carried out attacks on synagogues and Jewish shops across Germany.

“It was a date of shame and disgrace,” said Merkel, referring to Kristallnacht. “So on this 25th anniversary of the Wall’s fall, I feel not only the joy of November 9, 1989 but also the responsibility of German history.”

The artistic display of balloons, which dramatically illustrate how the Wall cut through the heart of Berlin, is also porous to enable people to easily move back and forth between the former East and West Berlin. The balloons were set free yesterday evening – symbolically reenacting the Wall’s collapse. 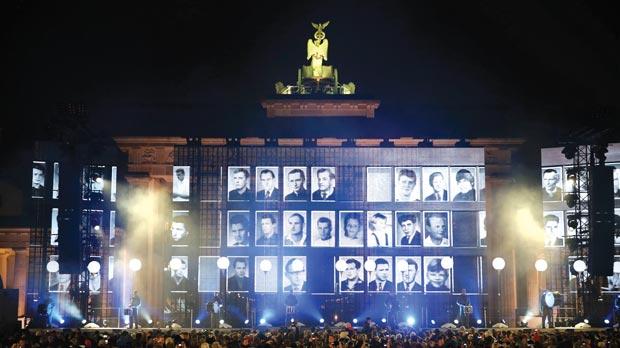 Musicians play drums in front of the Brandenburg Gate in Berlin yesterday during a commemoration of people who died while trying to cross the Berlin Wall to escape from former East Germany. Photo: Reuters

“We have every reason to celebrate,” Mayor Klaus Wowereit, whose city government has been rebuilding small segments of the Wall for posterity and tourists after almost all of the original concrete barrier was hastily torn down over two decades ago.

“We were all happy at the time that it had fallen and so it was torn down,” he said.

The Berlin Wall was built in 1961 to stop East Germans fleeing to the West. It began as a brick wall and was then fortified as a heavily guarded 160 km double white concrete screen that encircled West Berlin, slicing across streets, between families, and through graveyards.

At least 138 people were killed trying to escape to West Berlin and many who were captured ended up in jail. Communist regimes collapsed in the face of popular uprisings across Eastern Europe in 1989, signalling the end of the Cold War, of which the Berlin Wall had become the starkest symbol.

But despite the Wall’s fall, German unity a year later and 2 trillion euros pumped into the formerly communist east of the country, there are still lingering east-west political, economic and social divisions in the city and country.