You have worked in both the public and private sectors. What would you say were your biggest achievements?

If Austin Gatt was contesting I would not have stood

In the public sector, it was when for two consecutive years Malta ranked first in e-government services deployment and sophistication. It gives you great satisfaction to have Malta at the top of something which 10 years before was practically non-existent – and having been there throughout.

In the private sector, my greatest satisfaction was starting my own company, barely two years ago, focusing on a new niche: change management.

How many times have you offered to resign?

When I was chairman of MITTS, the whole board of directors had offered to resign in the wake of the hacking incident in 2008 because we gave IT Minister Austin Gatt incorrect information about the attack’s implications.

We had based our information on what we were told by the management but we felt we had collective responsibility.

Was that the only time you resigned?

Yes... Obviously then I resigned from Smart City in September 2009.

And again from MITA after that...

In December, but that was more a matter of a personal choice at the time.

This happened after what you called a “smear campaign”, giving the impression that politics was becoming too dirty for you. Now you have returned to politics. Do you think you have a thick enough skin or will you want to pull out again?

Whether you have a tough skin or not depends on the circumstances one is facing at any point in time. 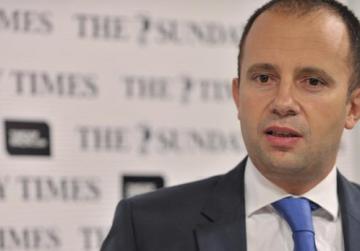 Would you describe yourself as a new face for the Nationalists or a face of continuity?

I would say I’m the face of evolution. I cannot say I’m new to the PN, even though I was never in the hub, except during the electoral process itself.

Austin Gatt took you from the middle ranks in the public service, right to the top. Is he your mentor?

Austin did not take me to the top. I was in the public service. A post was available in his secretariat and I was engaged.

And he’s kept you close to him ever since.

I’ve obviously worked very closely with him. Time and again, through my skills and contribution, he has realised my potential in the areas I was working in.

I was entrusted with projects. And, obviously, I was in the right place at the right time.

Are you the next Austin Gatt?

What are the differences?

Although people think we are very much alike, we’re very different.

In the way that Austin is very, very direct. What you see is immediately what you get. I tend to be slightly more diplomatic.

Some would describe you as his puppet.

I’m neither his, nor anyone else’s. Rest assured I have my own ideas, which even politically may not be exactly in line with his ideas.

He’s not contesting the election and you are one of the frontrunners from Valletta, his hometown. Is he helping you?

Let me make it clear. If Austin Gatt was contesting I would have not have stood. If Gege, his son, had contested, I would not have stood either.

It is no secret that Austin encouraged me to contest the election and that is a significant motivator for me to work in the district. Obviously I am born and bred in Valletta, and I like the people.

You are good at reading data. We see you at counting halls, reading the statistics of what is going on. Mathematically, does the PN have a chance of winning the next election?

Theoretically it is obviously a very difficult election, more so than 2008, but I still do not feel it is impossible to win the election. The fact that Labour is leading by 10, 11 per cent is not too far away from where we were five years ago. The reality is that the PN needs to pull the team together and talk policy, substance.

I am absolutely convinced if we talk substance we are miles ahead of the Labour Party.

If George Borg Olivier strove to achieve Independence, Dom Mintoff for freedom from the British, and Fenech Adami for democracy and the EU, what is Lawrence Gonzi’s vision?

I feel today there is no big issue. There is no single issue that unites people behind a party. Today you have multiple issues.

I think in the wake of an unprecedented global economic meltdown Lawrence Gonzi managed to steer the economic ship in the right direction.

Should he provide more than that?

I think he should be more visible about it. A lot of people take that for granted. We tend to talk in complex buzzwords and complicated terms. In that way, you tend to lose people. They start feeling like statistics.

The European Commission said something different last year. It said the Government is good with strategy, documents and policies but not so good with implementation. One of the main examples it provided was Smart City, which you were responsible for, both in strategy and implementation. In this sense, are you part of a problem in government?

I think, again, Smart City is a very long term project and it would take a separate interview to explain.

But maybe you can tell us what the problems were.

The idea was to create a hub in Malta with the right infrastructure and facilities for the attraction of knowledge workers: Maltese and foreigners. The project broke ground in 2007 and there was a significant investment made by the promoters in the development of the core infrastructure.

So today, no one speaks of the nearly €100 million that promoters have put into the infrastructure of a site which, with all due respect, was a dump up until a few years ago.

No, they talk about the jobs that were promised but failed to materialise.

The jobs were based on the projections being planned from Mcast, the university and private training providers. In effect, those jobs have been created.

People think of Smart City as if it is going to be a large, single company employing 5,000 people, which is not the case.

So the jobs were not meant to be taken up at Smart City?

They could be, obviously...

What jobs were created?

The ones based all over Malta?

The 1,500 graduates per annum that come out of Mcast and University in effect are finding employment.

So what was the point of Smart City?

The point was to create the centre itself, a business park. And that had to trigger a further attraction of foreign direct investment into the operation of the site.

Has it been successful?

I think to date the success cannot be seen. I think one has to assess...

Has the success not been seen because it hasn’t been successful or because no one is seeing it?

The success will be measured by the number of companies that have come to Malta and set up.

And how many have?

I’m not informed about that.