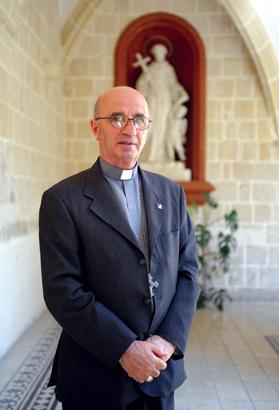 Maltese Bishop Silvestru Magro has spent the last two weeks largely locked up inside at the Catholic Church’s compound in the eastern Libyan city of Benghazi.

“The only safety for us is indoors. I practically haven’t been outdoors for two weeks,” Mgr Magro told Times of Malta in a brief telephone interview.

The Bishop had spoken to this newspaper when facing similar circumstances in 2011, when the city was being pounded by forces of the Libyan regime. But this time, he sounded decidedly more concerned.

He has held out for the past weeks in spite of regular pleas from the Maltese Foreign Affairs Ministry to leave the country.

“I was petrified whenever there was an explosion. The last two weeks have been terrible, but there were some Catholics, mostly Filipinos, who still had to leave. I felt that I could not go before they did. I think now it is time to move,” he said.

The fighting this time involves retired General Khalifa Haftar and the regular Libyan army on one side and on the other Ansar al-Sharia, a militant Islamist group that wants to introduce strict Sharia law in the country.

Last week, the Islamists overwhelmed Haftar’s forces – they literally flattened the headquarters of the Libyan Special Forces compound and declared Benghazi a Caliphate – an Islamic state.

However, their claim to have seized control of Libya’s eastern city has been contradicted, not least by the fact that thousands of Libyans took to the main streets of Benghazi and protested against the Islamist group on Friday.

“I cannot tell if they have control of the city. I think it’s too early to say but what’s for sure is that after two weeks of fighting everything fell silent some days ago and that the Islamists appear to have won the battle,” Mgr Magro said.

On Saturday night, the fighting continued, after dozens were killed over the past two weeks.

Foreign Minister George Vella said the government had been practically begging him to come back, especially because of his particular position.

“He is no ordinary citizen, he is a Bishop living in a place where Islamists are saying they have taken over. We are very worried for him, but now he seems to be willing to return and we are working on trying to get him and others out as soon as we can,” Dr Vella said.

The situation in Benghazi is complicated by the fact that the airspace and the ports are closed. But contacts are being made with the Italian and Filipino governments to include Maltese evacuees in their plans.