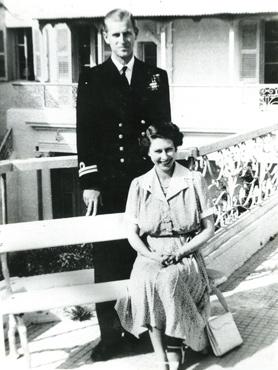 Prince Phillip signalling the arrival of the couple’s second baby in a photograph taken in Malta in 1949. Photo: Frank Attard

With the Duchess of Cambridge’s first solo engagement in Malta hanging in the balance after news that she is expecting her second child, it seems there has been a link between the island and royal babies throughout history. Back in 1949, a photo of Prince Philip and Queen Elizabeth, taken on the island by then Times of Malta photographer Frank Attard, hit the headlines of the British papers. It was a photo which made the speculation of the couple’s second baby more official.

In the picture, three years before Elizabeth’s sudden ascension to the throne, Prince Philip holds out two fingers as he rests his hand on a bench.The British press had interpreted the pose as a signal by Prince Philip that the couple were expecting their second baby. “I do not know if he did it on purpose or not, but all I can say is that Princess Ann was subsequently born in 1950,” Mr Attard recalled.

“For the British press, that photo of the couple in Malta started all the talk about their second baby.”

Malta is once again caught in the media storm over the second offspring of a young royal couple, Prince William and the Duchess of Cambridge, whose children will be direct heirs to the throne.

The duchess is due to come to Malta on her first solo official engagement for the 50th anniversary of Independence Day between September 20 and 21.

The visit is now in the balance after it emerged that the 32-year-old princess was being treated for acute morning sickness; a condition she experienced during her first pregnancy.

Mark Brincat, Mater Dei Hospital’s head of gynaecology, explained that the duchess’s condition – hyperemesis – was quite common during pregnancy.

“Will she be able to come here: who knows? We have to see, it depends on how extreme her hyperemesis is and at what stage of her pregnancy she’s at.”

A spokesman for the British High Commission said: “Decisions about future engagements, including the forthcoming visit to Malta will be made closer to the time, and on a case-by-case basis.”

In the UK, news of the pregnancy was greeted with enthusiasm – some even expressing hope that the new royal baby would encourage the Scottish to vote to stay in the union in next week’s independence referendum.

Others happily noted that the baby would be born around the time of the UK general election campaign, and would be a “much needed distraction”.

In Malta, news of the pregnancy was the most followed online story on timesofmalta.com.

With the Daily Mail last week reporting that the whole of Malta was only talking about “Kate’s visit”, presumably everyone has since been silenced now that her trip may not materialise. But the Daily Mail can be rest assured that the royal family is still on islanders’ minds.

The topic yesterday was who would visit if the duchess cancelled her visit? Would it be Prince Philip? Prince Charles? Camilla? Prince William?

“Let’s hope it’s Prince Harry,” many said, expressing their wish that the 29-year-old singleton, brother of William, will be replacing Kate.

Meanwhile, whichever member of the royal family makes it to Malta will definitely be impressed by the impeccable roads and paintwork: the route from the airport to Valletta and the President’s San Anton Palace are being freshened up with repainted road signs and patched up potholes.

“If we had to invite a Royal family member every month, our roads would be always in optimum condition,” one commuter told Times of Malta.

“Morning sickness is nausea and vomiting – hyperemesis gravidarum is its extreme manifestation.

“The vast majority of pregnant women have some degree of hyperemesis. Normally, people cope with it but it can be distressing. Some just feel nauseous and cannot stand the smell of certain foods, others are literally vomiting and when this becomes severe they can get dehydrated. It normally kicks off at the sixth or eight week of pregnancy, right up to 14 weeks.

“The flip side is that, apart from the odd exception, it is normally a sign of a very healthy pregnancy because it is the placental hormones that normally cause the upset.

“Hyperemesis is exacerbated by smells, having to cook, travelling and going on planes. It is a misconception that pregnant women are sick in the morning – it does not have to be the morning, it can be all the time.

“Treatment can include local folk traditions, such as honeyed lemon. When there is dehydration we put them on anti-vomiting drugs and rehydrate them, but for the run-of-the-mill morning sickness we normally recommend pregnant women keep well hydrated with water and have small but frequent meals.

“If it gets worse, consult the doctor.”