Prison Officer Michael Vella opened the slow-sliding clunky prison doors. We were barely inside and he was already reminiscing about the production of When You Hear my Voice, which he described as the experience of a lifetime.

For once, we were not a number

He had been completely involved, not only in the logistics of guarding the inmates while acting, but also on stage – he played himself, a prison guard.

“When I think about it, I still get goose bumps.”

As he opened the cell doors for three of the inmates who had taken part in the play, he explains the weeks following the production, when the adrenaline bubble burst, were hard on the inmates.

As they greeted each other, the three young inmates were lost in animated conversation, recalling every performance and how liberating it all had felt. They laugh and cheer and describe the opportunity as “insane”, “crazy” and “amazing”. 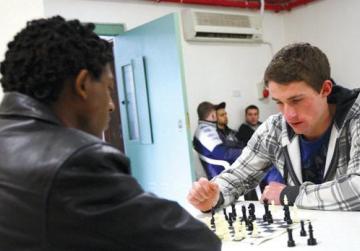 On the last night, the St James Cavalier audience’s reaction had overwhelmed them with emotion: “We were crying and we couldn’t talk. Man, I miss it,” said Jose Gomez, 24, from the Bronx, New York.

After the last performance they spent several days locked up in their cells: “Doing nothing. Thinking. It was kind of sad,” said Mark Bennet, 21, an inmate from the UK.

“How long has it been?” Aulis Zopp, 23, from Estonia, asked as we all trail into the visitors’ parlour.

He is looking slightly jaded: for him going back to his previous routine was a “shock” and “time stopped”.

For a long while they all kept reliving the Shakespearian experience in their minds.

“But how long are you going to do that for? I even started thinking that perhaps it had been a bad idea to take part. It was such a wonderful, crazy experience that then you say: OK what am I going to do now?” Mr Zopp said.

Their nagging fear is that no one will remember their part in the production.

“We were told this would give us an opportunity in the outside world – but you do start to question that by the time we get out, everyone will have forgotten about it,” Mr Bennet added.

Would they do it again? Three pairs of eyes lit up, until Mr Bennet spoke for them all: “Yeah! Definitely!”

“For once, we were not a number, but individuals who did something outside of prison,” Mr Gomez said.

The Sunday Times has been following these inmates from the Young Offenders Rehabilitation Services (YOURS) section at the CCF, since their very first rehearsal with Bruce Wall, executive director of the internationally-renowned London Shakespeare Workout.

None of the inmates had ever set foot in a drama class. Yet, the production ran for four nights to a packed house, and was highly acclaimed, with critics calling it “a humbling experience to whoever watched it” and “a perfect example of the true redemptive power of language and literature”.

On the last night the inmates even exchanged their families’ home numbers – in the eventuality that they lose track of each other as they moved divisions in prison.

Mr Zopp said their families talked regularly now and for the first time in his life his family approved of his friends. This gave him immense pride.

He said the experience had made him more “outspoken” and “less scared” about asking what he feels is right for him.

Realising the experience had changed them all, CCF operations manager Joanne Battistino set about finding the inmates who took part in the project work a job in the main prison to occupy their time all day long.

Mr Zopp now works in the tuck shop. Mr Bennet is awaiting a work posting but in the meantime he is also doing his English ‘O’ level. And Mr Gomez has been moved to the adult division, where he has taken up a computer course and works in the officers’ mess.

He has tried reading Shakespeare: “But, man it’s so complicated, without Bruce explaining it to you. He made it come alive.”

Although they are now busy, they are concerned there is no outlet for their emotions. “Emotions are trapped in this place. And somehow you have to release them or they get you into trouble,” said Jose.

Sport – which they practise regularly – is not enough for them.

“The predominant emotion released in sport is aggression. And there’s a whole ocean of emotions that you don’t normally deal with in here. You don’t want people to think you’re soft because they might think they can start messing with you.” explained Mr Gomez. Ms Battistino is set to make drama a mainstay of the educational provision at YOURS and with the support of the Home Affairs Ministry is in the process of organising drama classes for the young residents.

This will be good news for the inmates who find that drama has helped release their innermost feelings. When they got involved with the play, they were initially very robotic because of the wall they had built up around themselves. 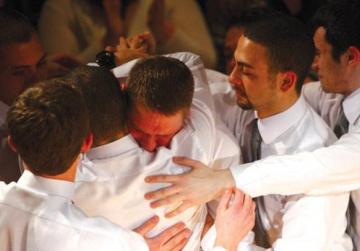 Hugs after their successful stage production.

“Bruce helped us bring the wall down.” Now, the wall has gone up again and their plea is: “We need more drama here”.

Mr Gomez said taking part in the play gave him a different perspective on life.

“Makes you think what else can I do that I don’t know that I can do?”

Mr Bennet nodded in agreement: “There’s more to life out there. Taking part in this production has opened my heart, my mind and my future.”

On the way out, The Times’ photographer Darrin Zammit Lupi showed the multimedia feature of When You hear my Voice to the prison officer. Images of pre-production and the actual play, left him in tears.