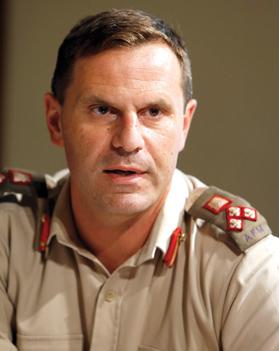 A sombre mood hung over the army a day after a court cleared two officers of any liability in the death of a colleague.

In his first reaction after the ruling, army commander Brigadier Martin Xuereb said the two soldiers were relieved that a weight had been removed from their shoulder but nobody was celebrating.

“There are no victors in all this,” he said, adding his first thoughts went to the parents of Gunner Matthew Psaila, 19, who died during a training exercise four years ago.

The biggest suffering was borne by Gnr Psaila’s family, he added. “They lost a son and we lost an excellent soldier. Unfortunately, we cannot turn back the clock.”

On Wednesday, the court cleared Lieutenant Christian Vella and Lance Bombardier Marvic Peregin of any liability in the young soldier’s death. The two officers were supervising the training for army recruits.

In her judgment, Magistrate Audrey Demicoli said she had compassion for Gnr Psaila’s family but the accused could not be held responsible for the sake of closure because they were not to blame.

Brig. Xuereb said the court’s conclusions echoed the findings of an inquiry held after the incident, which found that no individual could be blamed for Gnr Psaila’s death.

The prosecution and the dead soldier’s family blamed the supervising officers for carrying out a shoddy reconnaissance operation to test conditions at the training site the day before the tragedy.

The teenager died from hypothermia after finding himself in difficulty at Chadwick Lakes while going under a bridge in very cold water.

The judgment, which may still be appealed, has brought down the curtain on a painful experience for the Armed Forces of Malta.

Former commander Brigadier Carm Vassallo said he still felt anguish at what happened. He headed the army when the incident happened on a cold February day and recalled the hours spent at the hospital as Gnr Psaila battled for his life.

“The AFM and I were sorry for what happened. He was part of us,” he said.

However, Brig. Vassallo said it was important to understand that a soldier’s job had inherent risks. It is not a normal job, he added.

“As a soldier, your contribution is required when others are in difficulty. The exercise [in which Gnr Psaila died] had long been done and was necessary as part of the specialised training for soldiers of the C Special Duties Company,” he explained.

Much as you plan for different eventualities, the job can never be 100 per cent risk free

In court, the prosecution tried to bolster its case against the two officers by claiming bad weather and cold water exacerbated the difficulties trainees had to face.

“The army is obliged not to put a soldier in a situation he is not trained for but, much as you can plan for different eventualities, the job can never be 100 per cent risk free,” he said.

This reasoning was echoed by the magistrate, who noted Gnr Psaila failed to inform his superiors that he could not swim. The accused could have taken additional precautions to lower the risk if they knew, she said.

Magistrate Demicoli said she could not understand how the army did not make swimming an entry requirement when soldiers were sent abroad on anti-piracy missions and expected to rescue storm water flooding victims.

The army has changed its procedures since the incident with Brig. Xuereb pointing out that a specific risk assessment branch was set up in the wake of the inquiry findings.

He said the rigorous risk assessment process in place at the time had been formalised. “Today, we have a chain of documents that show who took decisions and why.”

The AFM also took on board a recommendation to carry out swimming tests for recruits.

It was February 13, 2009, and a group of army recruits were holding a training exercise at Chadwick Lakes.

Bad weather the previous night had inflated waters in the valley but the exercise went ahead anyway.

As the soldiers trudged through very cold water beneath a bridge in the outskirts of Mosta, tragedy struck.

Some soldiers found themselves in difficulty and had to be pulled out after going under the water, but for Gunner Matthew Psaila help arrived too late.

According to an inquiry headed by Judge Victor Caruana Colombo, Gnr Psaila was underwater for up to 10 minutes. He was taken to hospital and died three days later.

The inquiry found that the safety arrangements in place for the training exercise were inadequate and could not deal with the multiple problems that happened on the fateful day.

“The possibility that practically all of a platoon section’s trainee members [eight to 10 men] could get into difficulties simultaneously was apparently never contemplated or was considered too remote by exercise planners ever since this type of exercise first started being carried out by the AFM in Chadwick Lakes years ago,” the report had said.

The inquiry concluded that no individual could be held to blame for the death of Gnr Psaila, pinning down the cause to “misadventure”.

The supervising officers of that training exercise – Lieutenant Christian Vella and Lance Bombardier Marvic Peregin – were eventually charged in court with involuntary homicide.

They were acquitted by Magistrate Audrey Demicoli, whose conclusions resemble the inquiry’s findings.