Ħagar Qim has been scientifically reconstructed through a complex process to produce the closest image of what the prehistoric temple looked like when it was built 5,000 years ago.

I have absolutely no doubt there was a roof

Thanks to a student’s dedicated research, the remains, which date to about 3000 BC, have been given life once again – if only virtually.

Suzanne Psaila, 31, of Marsascala, has just completed her doctorate in archaeo-engineering and 3D visualisation at the University of Rome and has used a computer to scientifically reconstruct the prehistoric temple.

The project – her PhD thesis – took her four years to complete and was the cause of “many a sleepless night”, as she patiently constructed the virtual model “stone by stone”.

“It’s not simply a matter of drawing stones one on top of another: each stone is given all the dimensions and the weight – and the programme won’t allow you to keep on building if the structure can’t take the weight.” 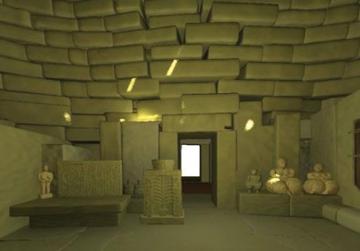 How the inside of the temple would have looked, according to Suzanne Psaila’s model.

Her reconstruction is based on facts gleaned from existing documentation and records of artefacts excavated from the site.

The 11.4 metre-high facade, for example, is based on a 5,000-year-old small model of a prehistoric building found at the Tarxien temples.

She also used laser data gathered by Heritage Malta in 2005 as part of a project to ensure the megaliths are documented accurately for posterity.

The end result is a visually impressive virtual walkthrough of the site: the majestic appearance of the rebuilt temple strongly suggests it was important.

The reconstruction model also allows viewers to visualise the effects of light on the building, including what it would have looked like inside.

“I have absolutely no doubt there was a roof,” Dr Psaila said, explaining it would have been very difficult for prehistoric temple roofs to survive in Malta.

“Our stone, globigerina, is very abrasive and the site is constantly exposed to wind and salt.

“Moreover, when Ħagar Qim fell into disuse, the roof stones would have been an easy source of ready cut stone and easily pilfered and recycled.”

Dr Psaila constructed a roofing system using a corbelling technique – as there is still evidence of it on site.

“The highest roof in the 3D model measures 8.5 metres – which could indicate a second floor inside.

She did not delve into what tools they could have possibly used to build such high, complex structures, but said: “I think we underestimate our prehistoric builders. When you see the reconstruction, you really have to appreciate their capabilities.”

The project changes our perspective of the temple-building era of pre-history because the visuals show how majestic Ħagar Qim really was.

Dr Psaila’s external examiner, Robin Skeates from the University of Durham, was impressed and told her she was the first PhD student who changed her mind on the Maltese prehistoric era.

The reconstruction animation can be seen under three separate lighting effects: natural sunlight at sunrise, midday and sunset. There is also a reconstruction of the summer solstice.

“Ħagar Qim was probably also used during the dark hours and the inhabitants must have had a source of artificial lighting – such as fire hearths or torches,” she said.

After four years of analysing the past, Dr Psaila now wants to see her project of the Unesco world heritage site made available to the public.

She believes computer graphics and reconstructions can be taken further by using augmented reality techniques.

“They can include sounds, touch and smells – it can help us experience the past in the most tangible manner.

“We have something so magnificent and so precious.

“Malta is an archaeological goldmine – there is no counterpart to it, anywhere in the world,” she said.