Discharge letters issued to more than 100 workers at the Environmental Landscapes Consortium are being withdrawn, the government said late on Tuesday.

Workers received the letters of termination earlier on Tuesday. They were told that they would no longer be needed as of next year as the consortium had failed to secure an extension of its private-public partnership deal with the government.

“Our efforts to extend the contract for a realistically adequate period of time have until now unfortunately failed,” workers were told in the letter.

“The company therefore finds itself in the position of having no other alternative but to issue collective redundancies to all its workers”.

Workers have been told that their last day of work will be December 31.

First established in 2003, the ELC is a consortium led by Calamatta Landscapes and Polidano Group which is entrusted with landscaping and general maintenance work in public areas and gardens.

A 2017 report by the National Audit Office found that the deal, which has cost the government more than €100 million since it began, was extended when it should instead have been dissolved due to contract breaches. 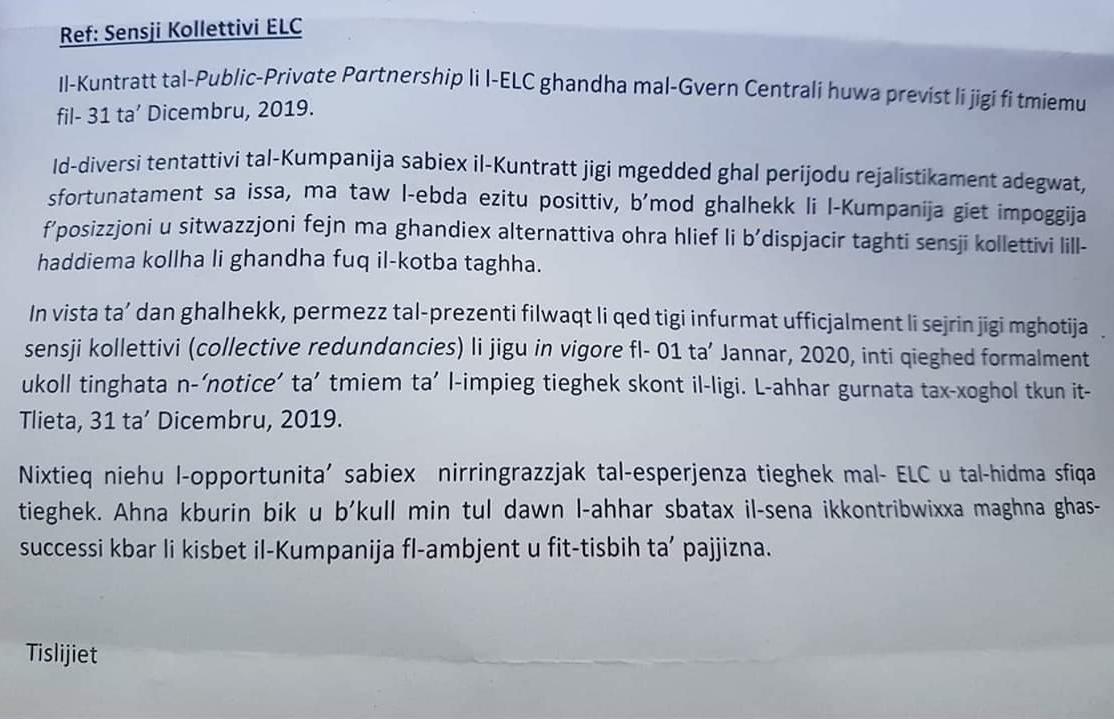 A copy of the letter sent to ELC workers.

Earlier this year, the ELC informed more than half of Malta’s local councils that it was no longer in a position to service and maintain their public areas and gardens, as it was operating the services at a loss.

In a reaction, the Environment Ministry said it was committed to ensuring that work related to landscaping continued and was improved. It also wanted to ensure that the service was provided in a manner that was transparent, efficient and reflected good governance.

The Ministry said the process for the issue of a new call for tender had started and it was mindful of the recommendations made in the report by the Auditor-General.

Talks were also in an advanced stage with the existing consortia to cover a transitory period so that if the contract was won by a new consortium, the ELC workers would be transferred to it.

Therefore, the discharge letters issued by ELC were being withdrawn.