This year the Sisters of Charity commemorate the 150th anniversary of their presence in Malta. It is an important milestone for the congregation which, in Malta, have come to be associated with people in need and vulnerable people.

The Sisters had come to Malta on December 1, 1868, at the request of the civil authorities of the time, by the controller who was responsible for opri soċjali. The foundress of the congregation, St Jeanne Antide Thouret, had died only 42 years previously in August 1826. St Jeanne Antide’s life was one of service to children, young people and the sick across France in schools and hospitals, some of which were established during her lifetime.

She was forced into exile during the French Revolution when all religious congregations were dissolved. When the Revolution had fizzled out, she returned to France and opened a small school and a soup kitchen for poor children. In the morning she taught basic subjects and catechism to the children, and in the evening she visited the sick in their homes. At the request of the mother of Napoleon, in 1810, she went to Naples to take  responsibility for the Hospital of the Incurables – a mission that led to further developments in Italy.

Jeanne Antide’s canonisation cause started in 1900 under Pope Leo XIII, and Pope Pius XI later named her venerable in 1922. The same Pope beatified her in 1926 and canonised her in 1934. It may come as no surprise that Pope Leo XIII started her process of canonisation as this Pope was the first to address social inequality and social justice issues with papal authority, focusing on the rights and duties of capital and labour.

The work of the Sisters of Charity in aid of people in need should be seen through this perspective. It sought to address the social inequalities of the time, as it does today, by continuing to work with the most vulnerable in society. Very often they took the lead in providing charitable services to Maltese society.

The first mission offered to the Sisters of Charity in Malta by the British authorities of the time was the care of orphans. The Sisters spent 72 years working in this mission, till 1940. In the orphanage, which was located in Valletta, the provincial lived with the Sisters, the novices and the orphans, following faithfully the Rule of Life of the order, and living fully the words of Jeanne Antide who said that “the superior of the house will provide prudent carers for the children, who will treat them with gentleness”.

Their work was not to stop there. In 1871, just three years after their arrival in Malta, the Sisters of Charity were entrusted with the care of people suffering from mental health problems at Mount Carmel Hospital in Attard. They continued giving service in this hospital till 1990. This work proved to be very challenging for them. However, as Sr Natalie Abela, delegate superior of the congregation in Malta, points out, “when one cares for one’s neighbour out of love for Christ, things take a different turn. The burden remains heavy but one is constantly sustained by God’s help that never fails.”

The Sisters also played an active part in the Maltese Catholic Church. After starting giving their service to State establishments, the daughters of Jeanne Antide Thouret also extended their service to the Church. Their first mission in this context was at the Saura Hospice, Rabat, where they served from 1871 to 2003.

Yet another challenging task was giving service to the Hospital of the Incurables from 1875 to 1892, at the place which is commonly referred to as Evans Building in Valletta. In 1878, the Sisters of Charity offered their services to the Holy Spirit Hospital in Rabat, where they stayed until 1967. This was the oldest hospital in Malta at the time, where the poor also found refuge. Thus, over a period of 10 years the Sisters had taken over five missions, all dealing with the poor and the sick. 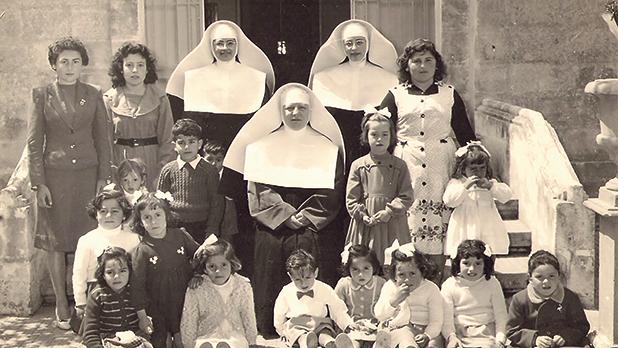 This needs to be placed in the context of the times. If the Sisters had not offered their services many would have ended up uncared for, unloved and living in extreme poverty.

The presence of the Sisters of Charity in Malta started to make a difference, and in 1880 they were entrusted with the running of the Conservatorio Vincenzo Bugeja in Santa Venera. In this place the Sisters of St Jeanne Antide Thouret offered their service for 120 years, until 2000. They expressed their charism with much generosity with many orphans.

Later they welcomed adolescents coming from problem families. Today the Conservatorio Vincenzo Bugeja mainly works with this latter group and has two homes, one of which is named after the foundress of the order. All the Sisters who have given a service there can confirm that, “it is the help of God that enabled them to perform this noble and challenging work with much dedication and love”.

In 1880, the Sisters ventured to Gozo. They were asked to serve at the Bishop’s Conservatory in Victoria, which at the time was an orphanage and a boarding school. Another institution where the Sisters of Charity gave their service is Cini Institute, an orphanage which they ran for 107 years.

A most challenging task was the work they did at the prison when the female section was transferred to Corradino in 1891. The Sisters were always ready to console the inmates with comforting words, without judging or condemning. The love of the Sisters was like soothing balm on the wounds in the hearts of the prisoners. They remained till 2003 and today a Sister still visits the prison, as a volunteer providing support to the inmates.

Another critical milestone that reflects the difference the Sisters were making in Malta, was the service they gave at St Vincent de Paul Hospital from 1892 to 2002. The Sister Provincial of the time went to Rome and brought back with her 12 sisters to work at this institution, which opened in October 1892. In the building there was also a wing for lepers.

The work of the Sisters in the area of health and social work continued to spread. They served at Lazzaretto Hospital at Manoel Island, the hospital catering for people with contagious diseases, from 1900 to 1975, and at Connaught Hospital in Mdina, the hospital for people suffering from tuberculosis, between 1909 and 1955. In recent years they also conducted home visits to the sick and worked at Hospice Malta, Caritas, the Secretariat for Social Assistance and Discern. 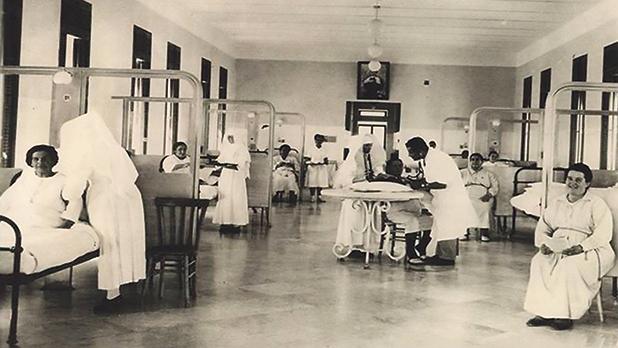 The Sisters also played a very important role at Id-Dar tal-Providenza in Siġġiewi. They were invited to provide assistance to this pioneering venture which was launched in 1968 by Mgr Mikiel Azzopardi to care for people with disability. The Sisters still serve at Id-Dar tal-Providenza to this day. Fr Martin Micallef, director of the home, emphasises that, “the Sisters of Charity have made a very important contribution for the home to get to where it is today. They continue to make a difference.”

At the turn of the century, the Sisters of Charity recognised that there was a need for more educational establishments. In October 1902, the Sisters opened a kindergarten and a workshop in Tarxien for young girls who were taught sewing, embroidery, art painting and life skills. The curriculum again reflected the Sisters’ vocation for those in need and who required help in becoming responsible adults.

The secondary school for girls was inaugurated in 1944. In the meantime, another kindergarten was opened in Birżebbuġa in 1922 and a primary school was opened in Gudja in 1955.

The schools run by the Sisters have provided thousands of boys and girls with a Catholic education that focusses not just on the academic aspect of the curriculum but also on education on life and faith, on social justice and on the value of helping the poor.

One of the most notable areas where the Sisters of Charity have made a most important contribution to Maltese society is in the field of health. In fact, they were often referred to as the Sisters of the Hospital. The various missions they have been entrusted with and to which reference has been made already are a sign of this. However, the most significant one was yet to come. This happened in 1938 when the Sisters were asked to provide a service at St Luke’s Hospital, which had started to be built at that time.

In every ward, there were two sisters, who not only tended the sick and assisted their families, but also provided guidance to student nurses. In 1948 their role was enhanced further with the opening of the Nursing School, run by Sr Aldegonda Farrugia. Hundreds of nurses learnt their profession at this school, which the government has over the years acknowledged to be of a very high standard, comparable to that of other countries.

The Sisters of Charity recognised that they needed to move with the times. It was important that the Sisters provided a service to the needy but they also recognised that they needed to involve Maltese society in their efforts. Sr Laura Tanti, on behalf of the community, launched the St Jeanne Antide Welfare Campaign in 1969 that has assisted many people in Malta and overseas. 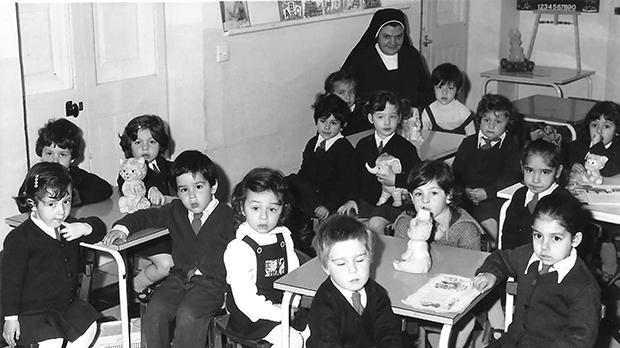 The community then set up the St Jeanne Antide Foundation to carry on the work of Sr Laura and to develop it further. Today the work done by this foundation is a response to the many needs that are not covered by State entities and NGOs, and seeks to offer a service that helps all members of the family that are passing through difficult times such as social and mental health problems, women victims of domestic violence and refugees.

A recent initiative is the setting up of the Association Friends of Thouret, which incorporates within it the Friends of Jeanne Antide, the Friends of the Mission and the Youth and Vocational Ministry. Also under this umbrella is Dar Hosea, a drop-in centre for women who are victims of prostitution. It offers a safe place where these women are listened to, enjoy a good meal and are treated with dignity and respect.

The Sisters have also served and continue to serve overseas in countries as diverse as Sudan, Egypt, Cameroon, Pakistan, Paraquay, Laos, Tchad, the United Kingdom, France, Italy, Libya and the United States.

Many women and men owe their education to the Sisters of Charity, as do many nurses and carers who were trained by them. People who have been under their care over the last century and a half have experienced directly the commitment and dedication of the Sisters.

Today, due to a lack of vocations, the Sisters of Charity are no longer present in the big institutions of the past, but their service, together with many committed lay men and women who are inspired by the charism of love and service that St Jeanne Antide lived, continues to make a significant difference to the life of others. Lay friends are an equally important part of our mission, which continues also through them as much as through the young women who respond generously to God’s call to serve Him as a member of our congregation.

The order’s ultimate aim is to continue to express God’s love by responding to the call of the the poor, the needy and the vulnerable wherever and whoever they are.

Maltese society is all the better thanks to the work of the Sisters of Charity. Through their service and assistance, the Sisters of Charity have not only made a difference to the those in need and those most vulnerable, but have also inculcated in the thousands of people with whom they have come in contact a sense of care and love for those who are less fortunate than them. 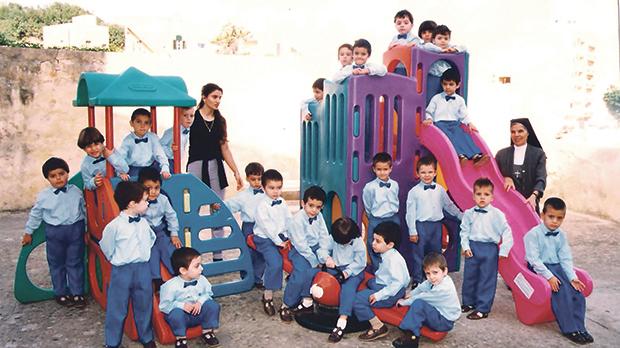 Sr Salvina Maria Curmi with her class of boys at Birżebbuga Kindergarten School.