While Malta has made substantial progress in cutting harmful material in the atmosphere, it still exceeded certain limits set by the EU and the WHO 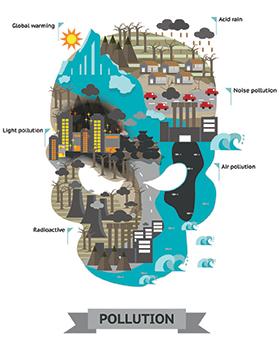 Pollution pumped out into the air decades ago could still be causing deaths today, a study suggests.

More recent exposure to pollutants had a greater effect on health, the researchers from Imperial College found, prompting them to warn there is an “imperative” to act now on air pollution to deliver both swift and long-term benefits.

Pollution caused 220 premature deaths in Malta in 2012, according to a study by the European Environment Agency.

While Malta has made substantial progress in cutting air pollution it still exceeded certain limits set by the EU and the World Health Organisation, according to the latest air quality report released by the EU agency in December .

The report is based on data from 2012 and 2013. During this period Malta’s air monitoring stations registered levels of particulate matter and ozone exposure higher than those permitted by WHO.

The major causes of these two dangerous pollutants are traffic and the building industry.

Particulate matter can cause or aggravate cardiovascular and lung disease, heart attack and arrhythmia. It can also cause cancer.

For every increased level of black smoke and sulphur dioxide people were exposed to in 1971, produced mostly by burning fossil fuels, they had a two per cent higher risk of dying in 2002 to 2009, the long-running study published in the journal Thorax showed.

For each increased level of PM10s people were exposed to in 2001, including particles from fossil fuels but also from the breaking up of road surfaces and tyres as vehicles drive along and brake, they had a 24 per cent increase in risk of death in 2002 to 2009.

In Malta in 2012, 2,300 potential years of life were lost as a result of higher-than-permitted particulate matter levels and another 300 years due to high levels of ozone-related gases in the air, the EU agency estimates.

Malta has a lower number of years of potential life lost (YYL) rate than the EU average in relation to particulate matter but almost double when it comes to ozone related gases.

On the other hand, the report said that Malta managed to remain within acceptable levels for nitrogen dioxide and sulphur dioxide. These pollutants are linked to combustion and are mainly released by cars, large plants like power stations and heavy industry.

While they said action should be taken to tackle air pollution, the study’s authors also said the effects of poor air quality were small compared to other risk factors such as smoking and obesity.

A switch to diesel has been widely blamed for continued problems with air pollution.

But tackling PM10s, 50 per cent of which come from road surfaces, tyres and braking, would also need a focus on lighter cars, report author John Gulliver suggested.

Lead author Anna Hansell said: “What this study is showing is that the effects of air pollution persist for a very long time, over 30 years in this particular study, and may actually be persisting longer than that.

“It’s also shown that the more recent exposures appear to be the more harmful to health.

“In a way there’s a good and a bad message; there’s an imperative there that because the effects are so long-lasting, we really ought to act on it.

“The good news is that if most of the risk is related to recent exposure there’s even more of an imperative to act because we’ll have an important short-term – in the next few years – benefit if we act now.”