The euro on Saturday marks 20 years since people began to use the single European currency, overcoming initial doubts, price concerns and a debt crisis to spread across the region.

Euro banknotes and coins came into circulation in 12 countries on January 1, 2002, greeted by a mix of enthusiasm and scepticism from citizens who had to trade in their Deutsche marks, French francs, pesetas and liras.

The euro is now used by 340 million people in 19 nations, from Ireland to Germany to Slovakia.

Bulgaria, Croatia and Romania are next in line to join the eurozone in the next few years -- though people are divided over the benefits of abandoning their national currencies.

The idea of creating the euro first emerged in the 1970s as a way to deepen European integration, make trade more simple between member nations and give the continent a currency to compete with the mighty dollar.

Officials credit the euro for helping Europe avoid an economic catastrophe during the coronavirus pandemic.

"And for young Europeans, who have only ever known the single currency, it must be almost impossible to imagine Europe without it," she wrote.

In the euro's initial days, consumers were concerned that its emergence had caused prices to rise as countries had to convert to the new currency.

Though some products -- such as coffee at cafes -- slightly increased as businesses rounded up their conversions, official statistics have shown that the euro has brought more stable inflation. 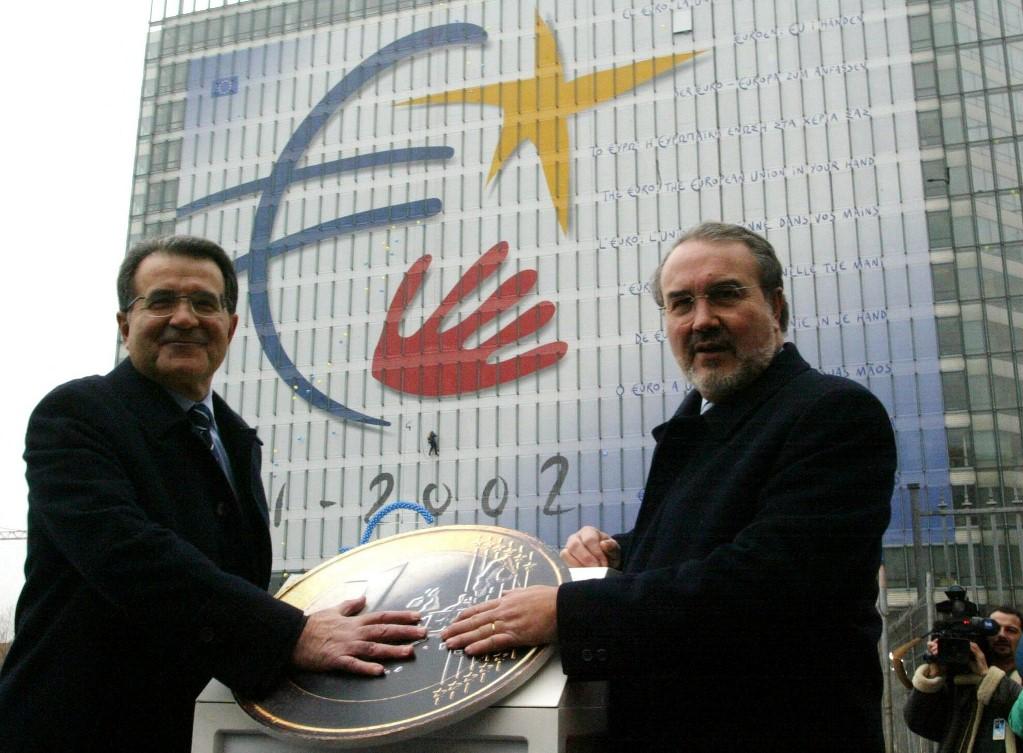 Romano Prodi and EU Commissioner for Monetary Affairs Spanish Pedro Solbes pose next to a giant euro coin on December 31, 2001, hours before the official launch of the currency. Photo: AFP

The price of a baguette in France, for example, rose from 66 cents in 2001 to 90 cents today -- an increase in line with pre-euro inflation.

More expensive goods have not increased in price, and even dropped in some cases. Nevertheless, the belief that the euro has made everything more expensive persists.

The red, blue and orange banknotes were designed to look the same everywhere, with illustrations of generic Gothic, Romanesque and Renaissance architecture to ensure no country was represented over the others.

In December, the ECB said the bills were ready for a makeover, announcing a design and consultation process with help from the public. A decision is expected in 2024.

"After 20 years, it's time to review the look of our banknotes to make them more relatable to Europeans of all ages and backgrounds," Lagarde said.

Euro banknotes are "here to stay", she said, although the ECB is also considering creating a digital euro in step with other central banks around the globe.

While the dollar still reigns supreme across the globe, the euro is now the world's second most-used currency, accounting for 20 per cent of global foreign exchange reserves compared to 60 per cent for the US greenback.

The eurozone remained strong after facing an existential threat a decade ago when it was rocked by a debt crisis that began in Greece and spread to other countries.

Greece, Ireland, Portugal, Spain and Cyprus were saved through bailouts in return for austerity measures, and the euro stepped back from the brink.

"It is fair to say that the euro has had an eventful first two decades," members of the Eurogroup of finance ministers said in a joint article. 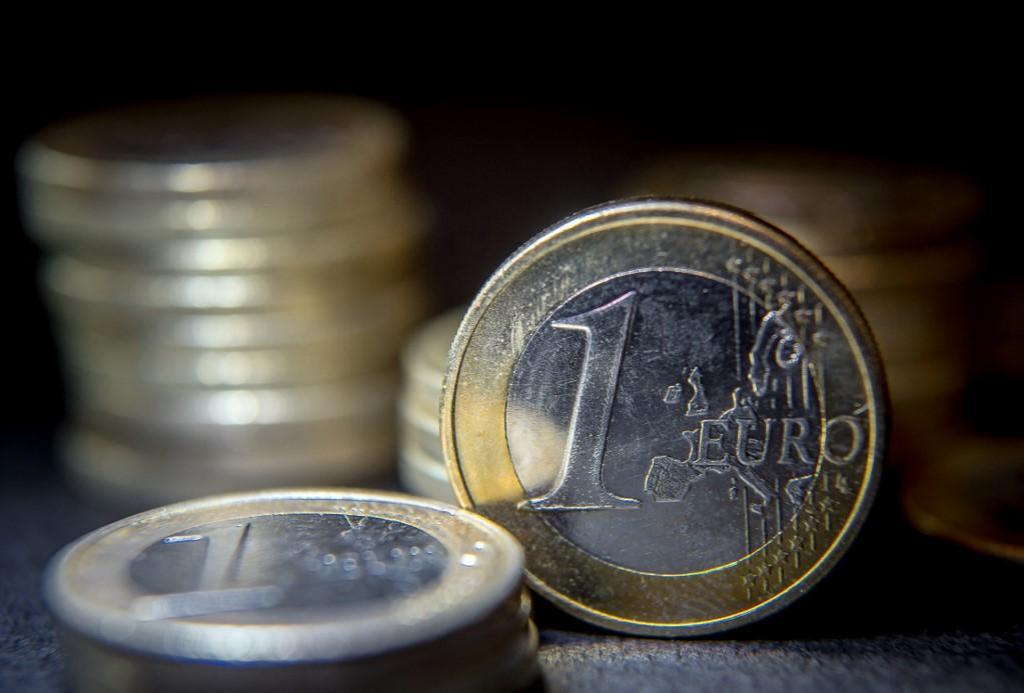 The Eurogroup learned "valuable lessons" that enabled it to respond to the pandemic swiftly, decisively and in a coordinated manner, they said.

"The euro has strengthened its foundations over the last 20 years Irish Finance Minister Paschal Donohoe, who heads the Eurogroup, said in a video message.

"It's proven its mettle in dealing with great challenges and great crises."

How Europe celebrated the euro in 2002

The 2002 currency change was a big deal for citizens affected, and it prompted a great deal of media attention. Here is a recap of the event, drawn from AFP copy at the time:

In a far cry from the austere New Year celebrations imposed by COVID 20 years later, fireworks, music and lights blazed out at midnight January 1, 2002 to mark the biggest monetary switch in history.

AFP reported that many people passed up on their traditional New Year's parties, choosing instead to queue up at cash dispensers in their enthusiasm to get hold of the first pristine euro notes.

In Berlin, Germans said hello to the euro and goodbye to their beloved mark at a special ceremony at the Brandenburg Gate, as up to one million people thronged the streets for the traditional giant New Year's street party there.

The euro cash was also a hit in the coffee shops and red-light district of Amsterdam.

Irish revellers were, however, less in a hurry to welcome the euro, continuing to pay for Guinness, Ireland's favourite tipple, in the national currency, leaving the headache of the changeover until the next day.

As many feared, the euro switch provoked sporadic price hikes across Europe.

From Spanish bus tickets, which jumped by 33 per cent, to a Finnish bazaar, where "everything for 10 markka (€1.68)" was now "everything for two euros", many price tags were a bit heftier since the single currency became legal tender. 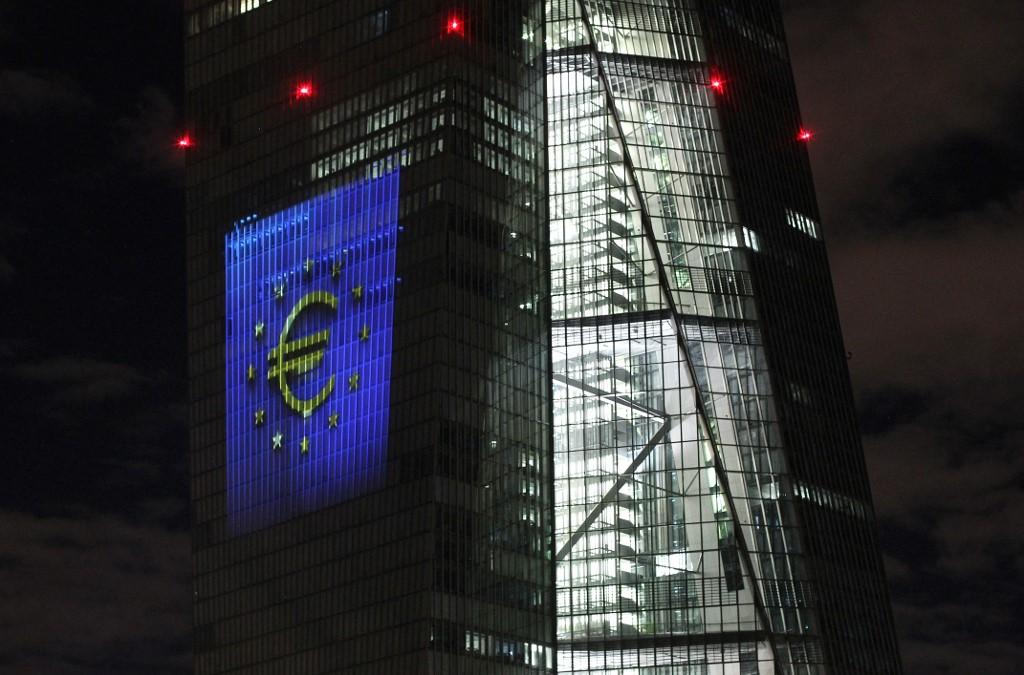 A euro symbol projection on a giant screen on the European Central Bank headquarters in Frankfurt on Friday night. Photo: AFP

The European Central Bank president at the time, Wim Duisenberg, who warned merchants not to take advantage of the euro launch to increase prices, said he had not seen signs of widespread abuse.

"When I bought a Big Mac and a strawberry milkshake this week it cost €4.45, which is exactly the same amount as I paid for the same meal last week," Duisenberg told reporters.

Europe surprised itself with the almost glitch-free transition to the single currency, AFP reported.

The Germans -- reputedly sceptical about the single currency and nostalgic for their mark -- turned out to be among the most enthusiastic.

An editorial in the popular German tabloid Bild proclaimed: "Our new money is moving full speed ahead. No problems whatsoever in saying adieu to the mark, no tears to be shed."

Initial "europhoria" was, however tempered as a few hiccups appeared, such as cash shortages, long lines in banks, post offices and at toll booths.

France urged citizens to not rush all at once to the banks with their savings, often hoarded under mattresses and in jam jars, as they had until June 30 to get rid of their francs at commercial banks and until 2012 at the Bank of France.

And the European Commission reported minor problems in getting small euro bills and coins distributed in most countries.

Duisenberg said, however, he was sure that January 1, 2002 would be written into history books as the start of a new European era.

Dreams of rivalling the dollar

At its adoption, French president Jacques Chirac hailed a Europe that was "affirming its identity and its power".

To the euro's most starry-eyed promoters, the currency was not only a leap of faith into European unity, but set up a rivalry with the United States and its powerful dollar.

But 20 years later, there is no question that the dollar still reigns supreme.

When the spread of the coronavirus shut down the world economy, the dollar's value jumped as investors poured into the safety of the world's de facto global currency. 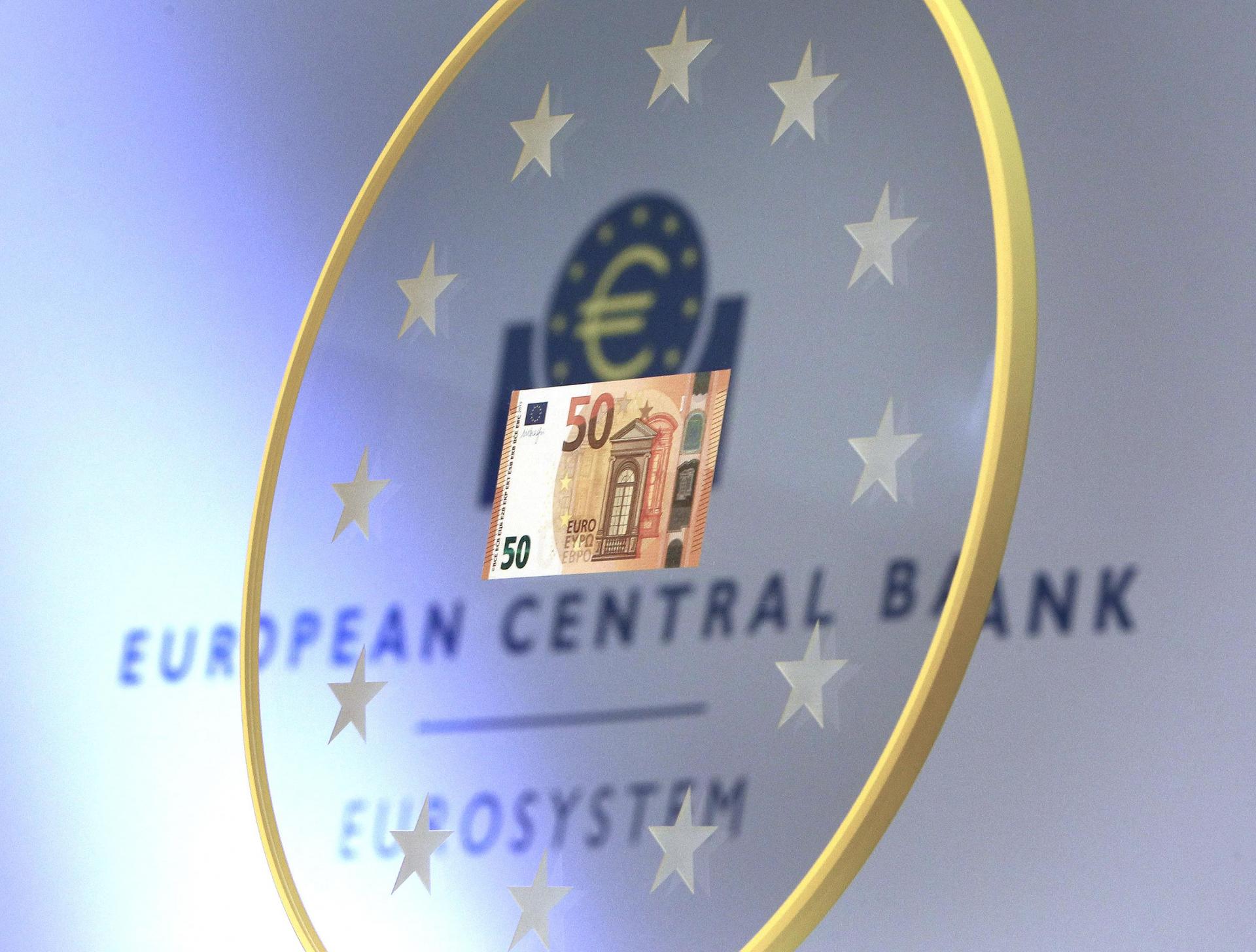 The European Central Bank, which controls the currency. Photo: AFP

More than $2.1 trillion are now in circulation, and about 60 per cent of foreign-exchange reserves parked in central banks are denominated in dollars.

The euro's share is about 20 per cent, according to the European Central Bank.

But even if it poses no direct threat to the hegemony of the greenback, Europe's single currency has been a respectable runner-up since it began circulating on January 1, 2002.

In the early days, the rules the European Central Bank placed on the euro took on a distinct German character in which stability -- and stamping out inflation -- was the only priority.

Making the euro a leading international currency "may have been the French view, but certainly not that of the German public," said Guntram Wolff, director of Bruegel, a Brussels-based economic think tank.

"When the ECB started operating, it was very much following the Bundesbank model, meaning being basically neutral on that question," Wolff said.

In any case, the dream crashed against the rocks of the eurozone debt crisis. On its 10th birthday, the euro was fighting for its survival.

The idea of promoting the euro as a tool of power made its comeback with Donald Trump in the White House.

When Trump ditched the nuclear deal with Tehran, European companies that had rushed to invest in Iran found themselves under threat of US retribution.

The EU scrambled to set up a legal workaround to keep European firms out of Washington's crosshairs, but the effort failed as companies shuddered at the costs of defying the United States and the long reach of the US dollar.

Stung, EU leaders ordered the European Commission to work on ways to counter this weaponisation of the dollar.

The commission in January came out with some ideas, but not a legislative proposal.

A European official with close knowledge of the debate said that, since the departure of Trump, the issue had lost momentum.

And in any case, "when you talk about the international role of the euro, you're talking about everything and nothing at the same time", the official said.

"Everybody agrees with the principle of having a bigger role for the euro in the world, but where disagreements emerge is how you get there."

Most agree that the missing magic ingredient is a safe asset, a euro equivalent to the US treasury bond that since World War II has been the global investor's refuge in stormy markets.

The huge demand for euro-denominated bonds to help pay for the bloc's massive recovery fund to bounce back from the Covid-19 pandemic has only given sustenance to the argument.

But the creation of a eurobond equivalent of the US T-Bill has long been a no-go for richer member states like Germany or The Netherlands who fear paying off loans that benefit France, Spain or Greece, countries with heavy debts.

Wolff of the Bruegel institute said a eurobond would certainly "help things". But what would work even better for the euro, he said, is a productive economy.

"If you have a dynamic economy, international investment will come to Europe and it will strengthen the euro as a currency," he said.