No sooner has the account been set up than hundreds of messages from beautiful women wanting to chat, and more, begin to flood my inbox. Just replying to one of them would cost me a few euros.

The women who get in touch are seemingly undeterred by the fact that my profile has no photos or personal information, and openly states that I am simply looking for scammers.

It all seems highly suspect, but the operators of this dating site, who have recently set up shop in Malta, actively rebuff the accusations of scams that regularly come their way, insisting they are a legitimate business.

Social Discovery Ventures, with offices in New York, Moscow and six other locations around the world, recently rented premises in Ta’ Xbiex to house its management and client relationship teams.

The company has also begun recruitment of customer support staff for its portfolio of dating sites, which includes AsianDate, EuroDate, AnastasiaDate, Dating.com, and others.

These websites all follow the same structure, where instead of paying a standard monthly fee, users pay for each message they send a woman on the site. A standard chat costs around 60c a minute, rising to €6 for a longer message or €8 to send or receive a photo or video. Users can also buy the women expensive gifts through the website.

All the dating websites run by the company have been the subject of strong and repeated scam allegations in various online forums and review sites. Former users claim the profiles on the site are run by automated bots or women who are paid by the website to talk to men.

Though the company reports several success stories, users report taking expensive trips to visit women they had chatted with in their home countries only to find nobody waiting for them at the other side, or women accompanied by agency representatives. 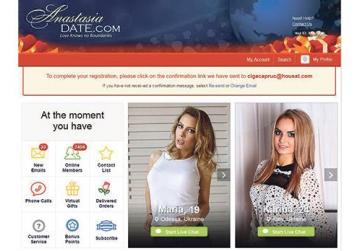 The Sunday Times of Malta was contacted by an applicant for a job with Social Discovery Ventures in Malta who was given two sample customer complaints as an ‘assessment test’. Both complaints centred around the legitimacy of the women on the site.

In one, which the applicant was asked to resolve, a user says he suspects that the woman he is chatting to is ‘on the clock’ and receiving a commission; in another, the customer says a scammer he reported is still active on the website.

“There seems to be over a hundred sites that seem to indicate your company is a scam and the girls are actually getting paid to chat,” the sample reads.

This newspaper set up a profile on Dating.com yesterday to explore the complaints. Despite including no pictures or personal information, and openly stating that it belonged to a journalist looking for scammers, the profile received more than 200 messages from women within hours, promising sex and, occasionally, marriage.

The vast majority of the women’s profiles featured professional photography, and many began chats with one of a number of seemingly standard lines.

It is currently impossible to sign up to any of the company’s websites as a woman looking for a man, raising questions about the nature of the women populating the site’s pages. Attempts by this newspaper to create a female account were either met with an error message or automatically changed back to the default ‘man looking for a woman’.

Social Discovery Ventures had not responded to a request for comment by the time of going to print. Founded by Dmitry Volkov in 1993, it lists some 50 direct investments on its corporate website, including popular music service Shazam.

In its help pages for its dating websites, the company claims to be proactive in dealing with scams and says it will reimburse all members for money spent chatting with women who misrepresent themselves.

AnastasiaDate in particular operates dedicated social media pages claiming to debunk the fraud allegation. In a series of YouTube videos, a representative explains that the huge volume of chat requests, as seen by this newspaper, came because “you have done a good job in creating an interesting profile”.

As for “why all the women on AnastasiaDate are so beautiful”, the site says it invites all the women to a professional photoshoot after verifying their details.