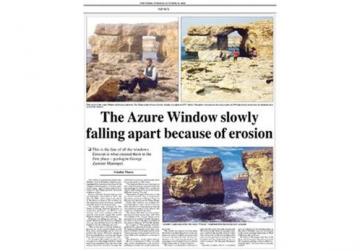 The Times had reported the phenomenon back in 2003.

Dwejra’s Azure Window is “doomed” to eventually become a solitary column, as erosion continues to see chunks disappear into the sea.

In the past few days a large section of the window crashed down, widening the structure and reminding everyone of the vulnerability of the scenic site in Gozo, which attracts throngs of tourists.

The story, reported yesterday, sparked a huge reaction online, with many readers on timesofmalta.com suggesting something should be done to protect the arch.

Like all similar rock formations, erosion eats away at the softer layers around the window, weakening the top part of the structure which, one day, will fall down.

Contacted by The Times, geologist George Zammit Maempel said the structure – like all sea caves that develop into windows – was “doomed to collapse in time”, though no one knows how long it will survive in its current shape.

As waves eat away at the sides, the hard rock at the top of the window develops more and more cracks as pressure at the centre increases, he explained.

This will leave the outer part of the window as a stack, a solitary rock column away from the mainland, which will continue to be eroded until it finally becomes a stump of rock.

Asked whether anything could be done to stop the erosion, Dr Zammit Maempel said the biggest damage was caused by events that used to take place on the top, the most fragile part of the window.

“You can’t stop nature. Just don’t put any more weight on the areas where it is cracking. Otherwise, there’s no solution. You can’t put cement or prop it up,” he said, adding that these things would change the natural state of the formation.

Nine years ago, The Times had highlighted the Azure Window’s plight and featured two photographs by Francis Xavier Aloisio – one taken in 1977, the other in 1999 – exposing the extent of its deterioration by natural erosion.

In 2006, the Gozo Ministry commissioned a geological investigation into the structural stability of the Azure Window, enrolling Bureau Veritas Consulting Limited from the UK. Its results are not known.

Then, in 2009, many Maltese had hoped the much-loved natural window would be included as one of the new wonders of nature, but it failed to make the grade in an international voting competition.

Throughout the years, the Dwejra site has been featured in films and TV shows, the latest being Game of Thrones, which sparked controversy when producers laid sand in the area, damaging the ecosystem.

The window was also prominent in the epic 1981 film The Clash of the Titans, which starred sex symbol Ursula Andress. In the film it looks similar to Mr Aloisio’s 1977 photo.