Opposition leader Joseph Muscat this morning toured development at Fort Chambray in Gozo and said a priority of a Labour government was to improve links to Gozo and develop Mgarr Harbour.

Fort Chambray is being developed into a high-end residential complex by a Gozitan company which had bought out the controversial Italian investors and has since invested some €100m in apartments and villas, some with private and other with communal pools. Many have been bought by foreigners.

Dr Muscat praised Dr Michael Caruana, who heads Fort Chambray Co. Ltd for its investment, which also includes the restoration of the fort. 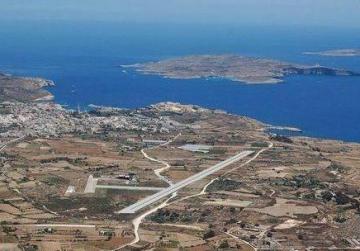 An impression of the proposed airstrip.

He said that a Labour government would consider all options for improved links with Gozo, including the proposed airstrip for fixed wing aircraft, but for him, the preferred option was a scheduled helicopter service, which could, under EU rules, be assisted by the government. A decision, he said, would have to be taken by the Gozitans.

He said the possibility of having a tunnel was also a good idea which needed to be further studied.

Dr Muscat said that Mgarr Harbour also needed to be further developed in order to unlock its economic potential. Such development, he said, could include another yacht marina.

The Labour leader noted how foreigners had bought most of the properties at Fort Chambray and said that the government's decision to stop and then replace the Foreign Residents Scheme had been harmful to the reputation of the country. The new scheme, he said, needed to be improved.

The PL leader was taken around the project by Dr Caruana, who said the project was unfolding in phases and would eventually also include a casino and a six-star, 85-room hotel.

He spoke about the need for an airstrip and a yacht marina, adding that Mgarr Harbour could be extended to take another 500 yacht berths.