Amateur fishermen are often lulled into a false sense of security that makes them skimp on safety instruments, according to a maritime law expert.

Ann Fenech, a lawyer who had been entrusted with the inquiry into the Simshar tragedy four years ago when a fishing boat exploded out at sea leading to the death of three men and a boy, said the main problem was that people accustomed to the sea believed no tragedy could befall them.

She was speaking in the wake of last week’s harrowing experience of a Żabbar man who was rescued almost 48 hours after getting lost at sea in thick fog.

Mario Axiaq went fishing in his 13-foot boat as he had always done for the past 20 years with no safety equipment on board. He headed out from St Thomas Bay in Marsascala towards Hurd’s Bank, a relatively shallow area where large ships often drop anchor for bunkering purposes.

But a blanket of thick fog made him lose direction and instead of sailing towards Malta he sailed further out to sea. Eventually, Mr Axiaq was rescued about 45 nautical miles out, closer to Sicily, two days later.

“Even the world’s best mariner will find problems navigating in fog, let alone with no safety equipment on board,” Dr Fenech said.

She said 45 nautical miles was “a heck of a lot of distance” and insisted amateur fishermen in small craft should not venture towards Hurd’s Bank even though it seemed close to shore. The area is about 10 nautical miles out.

“From my experience in cases like these, the main problem is that people enter a comfort zone believing that no such tragedy could befall them,” she said.

Enthusiasts in small boats can easily get carried away while fishing, she added, making them prone to sail further away from the shore.

After leaving hospital on Saturday Mr Axiaq said his biggest fear was being crushed by a big tanker. It was a justified fear given the small size of his craft but Dr Fenech insisted that in such circumstances radar would have been an important tool.

“It helps you see the navigation traffic around you, which is indispensible, especially in fog where visibility is very bad,” she said, adding that a VHF radio was also important to signal distress.

But nothing beats the good old fashioned compass, she added. It could have helped Mr Axiaq navigate towards Malta rather than mistakenly sail in an opposite direction.

It was the same advice given by veteran fisherman and president of the National Fisheries Cooperative, Ray Bugeja, when talking to The Sunday Times. Double food rations, a compass and a satellite phone were essential for any fisherman, Mr Bugeja said.

Dr Fenech said it was inexcusable even for amateurs to go on fishing trips with no basic safety equipment. There was no safe distance irrespective of how big the boat was.

“My personal gauge is that if you are not within swimming distance from shore it will be irresponsible to go out any further without safety equipment,” she noted. 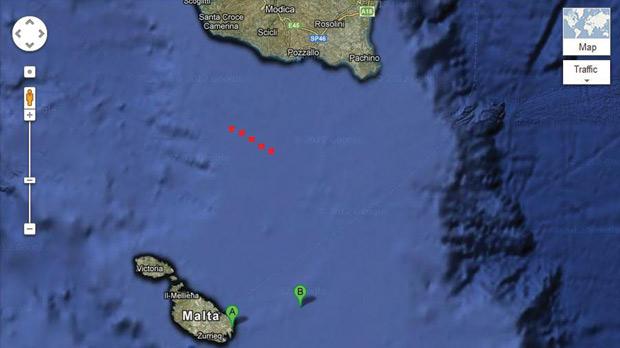 A long way out

A indicates St Thomas Bay in Marsascala from where Mario Axiaq left.

B is the approximate location of Hurd’s Bank, some 10 nautical miles out, where the fisherman had told his family he would be fishing.

Red dots indicate the approximate location, about 45 nautical miles to Malta’s north east, where Mr Axiaq’s wondering boat was spotted. The distance between Malta and Sicily (shown in the top part of the map) is approximately 60 nautical miles.