Every time a cruise liner sails in or out of the Grand Harbour, a solitary figure appears perched high upon a roof ledge cheerily waving a Maltese flag to welcome or bid the passengers farewell.

Charles Cremona, 70, has the timetable of the liners’ activity in hand and like clockwork he appears on the roof of his apartment block overlooking the Lower Barrakka Gardens and Grand Harbour.

This amiable practice started two years ago when a close friend of Mr Cremona’s was about to leave Malta for a holiday on board a cruise liner.

“I promised I would see her off, so when the cruise liner she was on coursed out of the harbour, I climbed to the roof of the block of apartments I live in and waved a large Maltese flag,” he said, after The Times spotted his unswerving practice and tracked him down.

“On her return, I welcomed her back in the same manner and have been doing it ever since. Only heavy rain and compulsory errands prevent me from keeping my regular appointment with the cruise liners,” he added. Over the years, Malta has cultivated a reputation for hospitality and Mr Cremona ensures the island lives up to its trademark reputation by vigorously waving a large Maltese flag each time a liner makes its way in or out of the harbour. 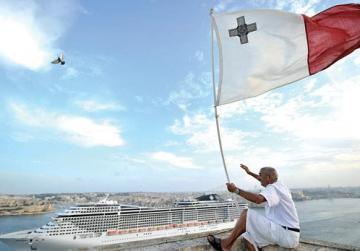 In turn, Mr Cremona’s enthusiasm is readily reciprocated by tourists on board the liners, who wave back with their beach towels and even take pictures of him waving at them from his rooftop.

“Sometimes, shots are snapped in such abundance that on a clear evening, the camera flashes seem more like lightning,” Mr Cremona smiles.

Born and raised in Valletta, where he lives with his wife Consiglia, Mr Cremona remains a Belti through and through, having close to his heart all things related to his beloved city.

Mr Cremona keeps himself active by going for a daily 30-minute jog – another appointment he never fails to keep. He also enjoys spending time at his son-in-law’s souvenir shop.

“My son-in-law sells some postcards featuring the Grand Harbour and the block of apartments I live in is clearly visible in the snapshot.

“I sometimes strike up a conversation with his customers and tell them to look out for me when they’re on board the cruise liners,” he said.

Consequently, it is not the first time he has been met with enthusiastic cries of “Ciao bello!” as the cruise liners pass by.

“I enjoy saluting the tourists in this manner. They always seem pleased to see me waving the Maltese flag at them and they never fail to respond enthusiastically.

“I feel as if I’m contributing to my home country in my own little way. I deserve a tourism medal,” he laughs, with a twinkle in his eyes.