Rosemary Gallagher from the Scotch Whisky Association explains why the taste of the golden liquid is unique. 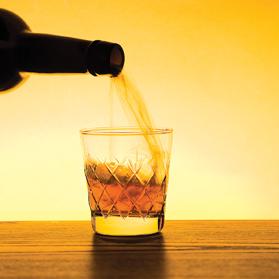 What is the earliest historic record of the distillation of Scotch whisky?

The earliest historical reference to distilling in Scotland appears in the Scottish Exchequer Rolls for 1494, where there is an entry of “eight bolls of malt to Friar John Cor wherewith to make acquavitae’”. A boll was an old Scottish measure of not more than six bushels (six bushels is equivalent to 152.4kg, enough barley to make 1,500 bottles). The earliest reference to a distillery in the Acts of the Scottish Parliament appears to be in 1690, when mention is made of the famous Ferintosh owned by Duncan Forbes of Culloden.

How have distillation methods changed along the years?

The soft air permeates the casks and works on the whisky, eliminating harsher constituents to produce a mellow whisky

While there has been innovation in the Scotch whisky industry, distillation methods have not changed greatly and traditional methods are still used. How Scotch whisky is made is regulated by UK law. Scotch whisky has been defined in the UK since 1933 and recognised in the European Community law since 1989. The current UK legislation relating specifically to Scotch whisky is The Scotch Whisky Regulations 2009, which govern the production, labelling and presentation of Scotch whisky.

What elements give Scotch whisky its distinctive taste?

Many theories and explanations have been put forward to try to answer this question, but there is no universally accepted explanation. The distilling process is one factor. The natural elements of water, peat and the Scottish climate all have a profound effect on flavour.

Water is probably the most important single factor and a source of good, soft water isessential to a distillery. Peat, which is used in the kiln or oven in which the malt is dried, also has an influence that can be detected in the peaty or smoky flavour of some Scotch whiskies. The Scottish climate is also important, particularly when the whisky is maturing. At this stage, the soft air permeates the casks and works on the whisky, eliminating harsher constituents to produce a mellow whisky.

What is the role of the Scotch Whisky Association?

The Scotch Whisky Regulations are UK law and play an important role in protecting Scotch. There is also protection in overseas markets – in many markets, Scotch whisky is recognised as a geographical indication, which means it is recognised as a product that can only be made in Scotland.

The Scotch Whisky Association is the trade body which promotes and protects the interests of the Scotch whisky industry at home and abroad and facilitates its long-term growth by: promoting Scotch whisky as a spirit of the highest quality produced in Scotland from natural ingredients; encouraging responsible consumption of alcohol as part of a modern, healthy lifestyle; projecting the integrity of Scotch whisky in any territory, if necessary through the courts; negotiating in all export markets for the removal of tariff and non-tariff barriers; ensuring that legislative or other regulatory measures maintain the competitiveness of the Scotch whisky industry; and promoting the interests of association members in the public arena.

Scotch whisky represents a quarter of the UK’s food and drink exports – to what do you owe this incredible success?

Defying continuing global economic pressures, the total value of Scotch whiskyexports grew by one per cent last year to reach more than €5bn. Scotch whisky is now worth almost €160 a second to the UKbalance of trade.

What is the best way to enjoy Scotch whisky?

It’s a matter of personal taste!