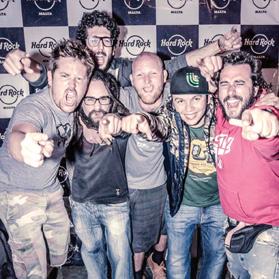 The response to this year’s Hard Rock Rising global competition was overwhelming, with 12,000 entries, 390,000 fan votes, and 941 competing bands.

These all gave their utmost for a chance to make their dream come true. Malta’s representative this year will be Mana Tapu who, having battled it out against some of the island’s best rock talent, will now move on to the global voting round and vie for the opportunity of a lifetime – a world tour in six renowned cities arranged by Hard Rock International (including a spot on the bill at the Hard Rock Calling festival in London), an album and music video produced through Hard Rock Records, and $10,000 (€7,600) worth of music equipment and gear.

But Mana Tapu cannot succeed without the public’s help, which is why they’re rallying their fans in Malta to show their support.

Along with 95 other winning bands from around the world who took the top spot in their respective city, Mana Tapu will battle it out during the final online fan vote.

Starting tomorrow at 5pm CET, fans will have the opportunity to vote for their favorite band, while downloading free tracks from any band of their choice. The top 25 bands, as determined by total votes, will move on to the final round, where a panel of music industry professionals, including Steven Van Zandt of the E Street Band, Live Nation senior vice-president of music Toby Leighton-Pope, Hard Rock International’s head of music and artist relations John Kirkpatrick, and Hard Rock Records co-heads of artists and repertoire James Buell and Blake Smith will evaluate the bands and select the Grand prize winner and two-runner up bands.