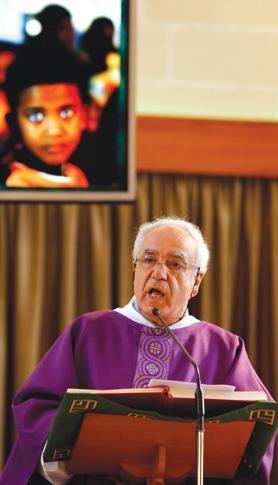 A “tsunami of racism” overcame Malta last week, according to Fr Joe Borg who used his Sunday Mass homily to remind his con­gregation of Pope Francis’s message of tolerance and solidarity towards immigrants.

“Today, instead of delivering a homily, I will read out the homily that the Pope gave during his visit to Lampedusa just last Monday. Let’s ask for forgiveness for any feelings of racism towards our neighbours and for any indifference to their plight,” Fr Borg told those hearing Mass at St Joseph the Worker church in Birkirkara yesterday.

During the open-air Mass celebrated in Lampedusa – a Sicilian island inundated by the landing of irregular immigrants – the Pope called on people to rediscover compassion.

The “culture of comfort” had led to a situation of “global indifference” and people had become insensitive to others’ plight, the Pope said.

Fr Borg and several other priests across the island took the initiative to ensure their congregation heard the Pope’s strong words. This fit in perfectly with yesterday’s Gospel that told the story of the Good Samaritan, which the Pope referred to in his homily.

“Last week, we had a tsunami of racism and hatred that, ironically, came just after the Pope delivered his message. I felt that what the Pope said is very relevant to us today,” Fr Borg said adding that he also followed the example of the Pontiff and celebrated Mass wearing a purple robe.

Has any one of us grieved for the death of these brothers and sisters?- Pope Francis

The day after the Pope’s visit to Lampedusa, a group of immigrants landed in Malta. Prime Minister Joseph Muscat said he wanted to send a strong message to the EU community that Malta needed help with the influx of immigrants and would not be taken for granted.

He said the Government was considering all options while making arrangements for two Air Malta flights to ferry the migrants. The move was blocked by an interim decision of the European Court of Human Rights, which upheld an urgent application filed by a group of NGOs defending migrants’ rights.

This led to tension on the island and fuelled a wave of racist comments against immigrants and plans for demonstrations to support the Government. Dr Muscat declared himself against such demonstrations and none were held so far.

Speaking after hearing the homily yesterday, many people felt Malta should help immigrants but something had to be done to address the problem. One man said: “We have too many migrants. We can’t cope. Something must be done.”

Anthony Attard said the Maltese people should help others. “But EU governments should be more united to help these people too,” he said, adding that the Pope’s words “hit the nail on the head”.

Natasha Camilleri said she believed immigrants should he given all the help they needed in Malta. However, they could not all remain here because “we are too small” and other EU countries should help out. “Perhaps a quota should be set to determine how many immigrants a country can take. At no point should they be sent back to their country where there is persecution,” she insisted.

Author Joe Friggieri, who attended the Mass, said there were racist and xenophobic feelings “which could get out of hand”. “The Pope was thanking the people of Lampedusa for showing solidarity with those unfortunate immigrants. I hope that if Pope Francis comes to Malta he will be able to say the same things to us,” Prof. Friggieri said.