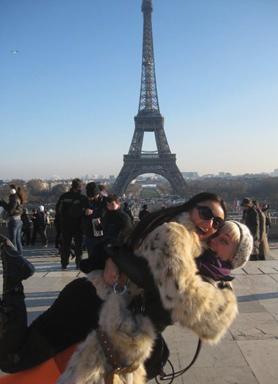 I was three or four years old when my parents took my sister and I on a road trip in our old Lada to the Carpathian Mountains in the west of Ukraine, on the border with Slovakia. I remember loads of snow and a very enjoyable snowman-making competition.

When it was time to leave the car was buried in snow and Sasha (my sister) and I had to dig it away – now I think about it, I think my dad was actually playing a joke on us!

There were really tasty Carpathian dumplings for breakfast in the hotel and an electronic machine selling soft drinks in Slovakia, which I had never seen before. When I was four it was 1992 and the Soviet Union had just collapsed. As kids we weren’t accustomed to seeing the things they had in Western countries like Slovakia.

I also remember the scariest, darkest and longest hotel corridor of my life in one of the places we had to stop for the night so my dad could take a break from driving the 800 kilometres from Odessa to the Carpathians.

There were really tasty Carpathian dumplings for breakfast in the hotel and an electronic machine selling soft drinks in Slovakia, which I had never seen before

My best holiday ever…

I distinguish between travelling and holidays. Also, I believe not every holiday necessarily involves travelling. Every trip in my life was a special one and helped to broaden my perspective on life.

Living on a tiny ‘holiday’ island for the past five years has made me feel rather claustrophobic at times, despite appreciating the local lifestyle a lot (otherwise I would not have stayed here for so long).

So I try my best to go abroad at least once every five or six months, be it for work, conferences, or just visiting friends. It’s great for refreshing the brain.

If we are referring specifically to holidays in this question – a trip abroad with no work-related connotations – I will tell you about a birthday present from my sister in 2012.

It was a ticket to Sicily for a weekend with three of our girlfriends. I will not tell you all the details but it was a proper girls’ holiday! We slept in the same room, jumped on the beds (I did at least), bought shoes and underwear, found a rave party in the middle of Palermo, wandered to a flea market, got lost, got moody and much other girly stuff…

I would never return to…

Piazza di Roma in Venice, the Eiffel Tower in Paris and other widely promoted sightseeing locations for tourist-consumerists.

I have a fear of crowds; I start panicking and feel really uncomfortable, so I can never spend much time in such places without my subconscious telling me to run away.

Unfortunately, it makes me feel that many people (let’s hope I am wrong) go there for the sake of crossing out another line on their must-visit list.

I much prefer less visited and unknown places in big cities, which still hold some sort of a real and raw feeling, untouched by globalisation and commercialisation.

Sadly, I am aware that since I want to discover such places, there are other people who want to do the same, and eventually those hidden treasures will also turn into a celebration of consumerism. But I have a slight hope that maybe such places will never interest big crowds.

The most dangerous place I’ve visited…

During the six months I spent in Berlin there were several times when I’d catch the wrong bus or tram and end up in some unknown area of the city without a clue of how to get home.

Some of these mishaps happened at night. Several times I was followed.

Those moments made me realise that despite big cities having lots of exciting cultural events to offer, they also have many hidden, unpleasant and dangerous secrets in less polished urban corners.

Big cities are vibrant and diverse; they can be colourful and crowded; but they can also be lonely and dangerous.

I would say Odessa, where I come from. And Berlin, because it was the only foreign city I had time to properly explore, as on the usual one-week holiday there is no chance to really understand a city.

Berlin was amazing for the enormous choice of everything: food, clothes, parties, museums, architectural styles… literally anything.

Of course, there are also problems, as there is anywhere. But Berlin is a great place for ideas and inspirations. It is just important not to get too lost!

My most treasured holiday souvenir…

I have stopped buying souvenirs. I’d say what I treasure the most after each trip abroad are the new contacts and new people I meet. It feels very refreshing to meet new people, as in Malta you don’t meet a total stranger too often.

Once I met a young man in London who was a friend of my British friend. After overhearing that I live in Malta, he said his college friend recently visited the island, obviously not expecting that there would be any chance of me knowing this friend of his.

Five minutes later, after establishing all the connections, I was telling him that not only did I know his college friend very well, but I also knew two other friends of theirs, his own girlfriend, and the fact that he was a shoemaker.

I could see that he was shocked that a stranger like me from Malta knew so much about his life. He was even slightly threatened by the power of connections in the Maltese islands!

Definitely not the Parisians. On the other hand, Marseille has a totally different, friendly vibe.

I never travel without...

The ones of my family together in the Carpathians. My father is a sea captain, so my parents were often abroad when I was young. Those moments of my childhood when we were actually all together and happy have a very special place in my heart.

I guess somewhere at home in Ukraine we still have that photo of me and Sasha digging out the old Lada from the snow.

I think that dark corridor I described from my first journey memory. And also the room in Palermo where I stayed with the girls. It was meant to be a two-bedroom apartment with a kitchen and bathroom. There were two double beds in one room, and a shower and a kitchen magically installed inside a cupboard! All in the same room!

There was also a balcony with a beautiful view of one of the old squares of Palermo, and an amazing vibe between the girlfriends that was only enhanced by the misfortune of the ‘two-bedroom Sicilian apartment’.

I return most often to...

I rarely have problems with people I travel with, as we have similar interests and respect each other. I am always open for compromise, or I can easily wander off on my own.

Usually you can tell in advance who you will get along with easily and who will be spoiling the trip by moaning and complaining.

My next holiday plans…

I would love to go to North Africa. I find it illogical that Malta is situated between the two continents but there are many more flight connections to Europe than North Africa, which is not far at all. I don’t know much about North Africa. I look very different from people there, my traditions differ immensely, and I would feel very privileged to have a glimpse of their culture.

When I was seven and I had to write a school essay about my dream holiday, I wrote about visiting Antarctica. I believe my dream hasn’t changed.

Conduct some research at home about the place you are visiting but leave some space for surprises.

Be respectful to other cultures and traditions; remember that you are visiting their home.

I believe it broadens your understanding of yourself and others. Also, because the world is huge and we sometimes forget that when living on a tiny island.

Travelling in the right way can be regenerating and inspiring.