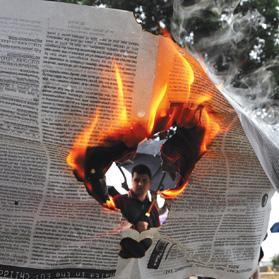 Theatrical and artistic performances will be exempt from morality and blasphemy laws under amendments to be discussed in Cabinet in the coming weeks.

Culture Parliamentary Secretary José Herrera said yesterday he expected to receive Cabinet backing for the proposals because “the removal of censorship was one of our [electoral] pledges”.

Asked to explain what amendments were being proposed, Dr Herrera said artistic and theatrical performances would be made exempt from “ordinary crimes related to morality” in the Criminal Code.

This included blasphemy laws, he confirmed.

The people should be the judge of artistic merit, not the police

The amendments were necessary because currently the police could impede any performance deemed to be in breach of the Criminal Code, Dr Herrera pointed out.

Exemptions will only apply to performances in “designated spaces”, such as art galleries.

Pornographic cinemas will not be covered by the changes, Dr Herrera said.

Last year, under the previous government, a Bill was passed which removed the stage censorship board and introduced self-regulation by theatre producers.

While welcomed by the artistic community, theatre producer Adrian Buckle said those changes did not go far enough as performances could still fall foul of morality laws in the Criminal Code.

His theatre company Unifaun had fallen foul of censorship laws in 2009 when it was prevented from staging the play Stitching by the now defunct Film and Classification Board.

Unifaun contested the ban all the way to the Constitutional Court but the ban was upheld because it was deemed to breach blasphemy and obscenity laws.

The case is now before the European Court of Human Rights.

“We will eventually perform the play here but we do not wish to do so in breach of a court ruling,” he said.

Despite being performed all over the world, Anthony Nielsen’s Stitching was banned in Malta on the basis of its script.

“Obscenity or blasphemy to prove a point artistically should be allowed. The people should be the judge of artistic merit, not the police,” Mr Buckle said.

“If the people see an obscene performance with no artistic merit they will vote with their feet.”