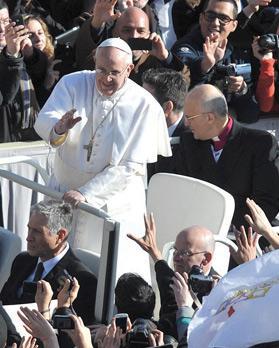 Mgr Xuereb is seen behind the Pope in this file photo by Matthew Mirabelli.

Pope Francis has named his personal secretary, Mgr Alfred Xuereb, to supervise the activities of the Vatican Bank, in a sign the pontiff wants to keep a tight grip on the drive to clean up its operations and image.

Mgr Xuereb, 55, a Gozitan, will be responsible for overseeing two commissions created by the Pope to supervise the bank itself and the economic structure and finances of the Holy See, the Vatican said in a statement.

Since taking office in March, Pope Francis has moved to tackle years of financial scandals involving the Vatican bank, formally known as the Institute for Works of Religion, which is under investigation on suspicion of money laundering.

Mgr Xuereb will keep the Pope informed about the work of the commissions and any action that needs to be taken, it said.

Vatican spokesman Federico Lombardi told reporters that Mgr Xuereb had been working in this role unofficially for some time, but would now be able to do so more effectively.

The Vatican has signed an agreement with Italy over exchanging financial and banking information and the IOR has opened a website, www.ior.va, and begun publishing annual reports in a transparency drive.

Pope Francis raised the prospect that the institute could even have to be closed down unless it could reform itself.