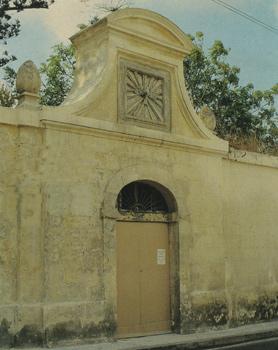 When one analyses today’s permissive society with regard to standards of morality, one might conclude that present-day Malta has plummeted to unprecedented decadence. Scholarly research on Maltese social history during the late Middle Ages has shed a new light on this time of darkness, often depicted as a time of Christian fundamentalism rigidly devoid of the pleasures of the flesh and other carnal inclinations.

Over the past four decades, Malta’s erudite medievalists have unearthed original documents that resonate with tales of passion and depravity, honour and shame – studies about the sexual aspects of sociology which help society, in the words of Peter Laslett in his seminal book Family Life and Illicit Love, “to assess better our present standards of morality”.

After my previous forays in the dark labyrinth of this aspect of Malta’s social history, I delved deeper into the pioneering works of the island’s medievalists, particularly those of Godfrey Wettinger, Stanley Fiorini and Frans Ciappara in their studies in academic journals.

I have to stress that the purpose of this feature is neither to demonise, nor to sanitise this turbulent period, because in my opinion, history has to be viewed within the context of the prevailing circumstances; consequently in order to evaluate properly the morality and sexual mores of that time, one has to understand fully the harsh living conditions when life expectancy was half what it is now, when poverty and even starvation were rampant, when plague, cholera, typhoid, vermin-carried diseases and smallpox frequently ravaged Malta’s towns and villages, and when fear of slavery or a life of abject servitude seemed an inevitable fate.

It must also bear in mind that it took time for the tenets of the Council of Trent (1574) to take root, especially with regard to the sacrament of matrimony, such an important component in Christian life, with the result that it was in complete disarray. The presence of the parish priest was not mandatory to marry, nor the publication of the marriage banns, or even the official registration of the act of marriage. A valid marriage re­quir­ed only the mutual consent of the bride and groom.

It has also been suggested that the prevalence of arranged or shotgun marriages may have necessitated other outlets for romantic love and marital infidelity. The situation was not much better on the European mainland where squalor and misery and disease were a common occurrence. However, it would be wise to admit how little is as yet known, and the little I have gleaned so far can scarcely be called enough historical data for the social scientists.

The sacrament of matrimony, such an important component in Christian life, was in complete disarray

The late Middle Ages, particularly before the coming of the Knights in 1530, were characterised by a male-dominated society under a feudal system governed by barons and nobles mainly en­sconced in the old capital of Mdina. The prevailing practice in these feudal times allowed the feudal lord to deflower the new bride in their domain, enjoying the right of jus primae noctis, before releasing her to her lawful husband.

Quite naturally, this privilege, haughtiness and rapacious attitudes of the barons of Mdina was repugnant and offensive to humble village folk. Generally, the conduct of men towards illicit sex was vaguely permissible, while it was unpardonable in women, and all the perfumes of Arabia would not wash away the indelible stigma on the family honour.

Malta’s medical history dates back to the mid-14th century when the Santo Spirito Hospital in Rabat was known as the Ospidale di San Francesco, originally run by the Franciscan Third Order, and administered by the Mdina Universita from 1494 to 1496. The well-documented early prescriptions included those for the morbo gallico or venereal diseases generally transmitted by illicit sex.

We also find records that reveal the extent of this disease outside the hospital when Magnificus Francesco Ingomes was being treated privately by Nobili Antonio Perurelio, and Padre Giuseppe Scicluna of Vittoriosa, who was being seen by the Inquisitor’s medical assessor Dr Salvatore Saltalla. The medical history of Vittoriosa refers to the doctors assigned specifically by the Inquisitor to examine the state of health of transgressors before they are dragged to the torture chamber.

Santo Spirito Hospital introduced another ‘social service’ rendered with loving care and devotion, that of foundling, or as Prof. Fiorini states in his scholarly book on this ancient hospital, “taking under its care infants who, for a variety of reasons, could not be cared for properly in their own family”. Most of these foundlings were children of unmarried mothers who, because of social pressure and abject poverty and disease, placed their babies at the door of the hospital.

Secure records of the early Knights’ period in Virttoriosa relate to the care of the sick and foundlings of mainly illegitimate children. These babies were looked after by wet nurses, and later by nuns. Another source of information about the proliferation of prostitutes in the area of Mdina and Rabat, as well as in the maritime city of Vittoriosa, emerges from the baptismal records of St Lawrence parish church in Vittoriosa and of the Mdina Cathedral, where prostitutes were shown as “peccatrici”.

The situation was not much better in Vittoriosa where the Status Animarum, an important source of information for the social scientist, records that prostitutes inhabited a particular area of the old city. There were at least 18, aged between 17 and 35, all living in the same quarter where some influential nobles kept a stable. Some of them paraded as courtesans catering for the upper classes.

Why this moral laxity, one may ask. It appears that those who were supposed to provide moral leadership and guidance – royalty, the nobility, the professionals, the feudal rulers, the knights and some of the clergy – were setting the worst possible examples.

It is with great conviction that I underline the fact that today’s edifying behaviour and religious commitment of the great majority of the clergy in Malta is undoubtedly a model of honesty and probity compared to the loose living prevalent in the late Middle Ages when adequate preparation for the priesthood did not exist, with the result that some priests flouted the vow of celibacy and kept concubines.

The situation in Spain and Switzerland was not much better, with parishioners insisting that priests must have concubines as a measure of protection for their wives. With the Counter Reformation and the strictures of the Council of Trent, the situation in Malta began to change for the better, particularly with the opening of the seminary in Mdina, now housing the famous museum, by Bishop Mgr Paolo Alpheran de Bussan (1728-1757).

Illicit sex among the professional and sophisticated Rhodiots, who accompanied the Knights to Vittoriosa in 1530, was quite substantial. The twist in one case renders it, in my view, a felix culpa, a happy sin, when one of the most prominent Rhodiots Leonardo Myriti, a personal doctor of Grand Master l’Isle Adam and surgeon at the Sacra Infermeria in Vittoriosa, had two illegitimate children, Joannes and Joanna, by his servant Mazina. When Joanna was 14, he appointed procurators to intervene with the Pope and cardinals to procure her legitimisation. On the other hand, Joannes obtained international recognition in Mathematics and Astronomy, and according to the late Chev. Maurice Agius Vadala, was the first-ever Maltese-born citizen to publish the first description of the Maltese islands, in some respects paraphrasing the work of Quintinus.

The history of illegitimacy mostly discernible in the cities bordering the Grand Harbour, continued over succeeding generations, according to statistics published by Prof. Ciappara in his in-depth study Perceptions of marriage in late 18th-century Malta. For example, in the parish of Porto Salvo, Valletta, there were 5,174 illegitimacies between 1750 and 1800, amounting to 25.7 per cent of the population; in Vittoriosa, the number was 400, that is, six per cent of the population. By comparison, the number in rural Siġġiewi was 34, or 0.8 per cent of the entire population of 4,498.

In Malta, illicit love seems to have been an urban, rather than a rural phenomenon, and it had nothing to do with religious dogma. This underlines the prevalence of ‘honour and shame’ in the rural districts of the eastern Mediterranean littoral, where such a transgression is immediately avenged, and instant retribution was fiercely demanded, as in their small communities, family life was sacred. In his well-documented study on this subject, Prof. Wettinger relates an incident leading to the brutal murder of a notable Mdina citizen in 1473.

In early June on a moonlit night, Cola Caxaro, brother of Petro of Cantilena fame, in the company of two friends, left Mdina on his donkey, arriving at Siġġiewi at three in the morning. In the stillness of the night, he entered the courtyard of the beautiful Caterina, serenading her and begging her to meet him.

Terrified, Caterina completely ignored him, when a neighbour named Gaddus emerged from the shadows and gently admonished Caxaro. Normally a very decent person, Cola Caxaro, realising he had exceeded the unwritten laws of decency, relented, and together with his companions he proceeded slowly to Mdina.

News of this audacious incursion by a hated citizen from Mdina spread like wildfire, and immediately, an angry mob chased them. Following a few verbal exchanges, Caxaro apologised and the two factions separated. The eerie silence was soon pierced by the frantic hysterical cries of the womenfolk urging the men to kill the transgressor who dared entreat Caterina to embrace him, shouting: “Tomorrow we shall be reviled and ridiculed by the rest of the village… If you have not killed them, go back and kill them now.”

Caxaro was spotted hiding in a deep cave at Wied il-Ħasri, and in spite of his pleas for mercy and for a priest to hear his confession, he was stoned to death by the angry mob, as if Sharia Law was executed in Malta. 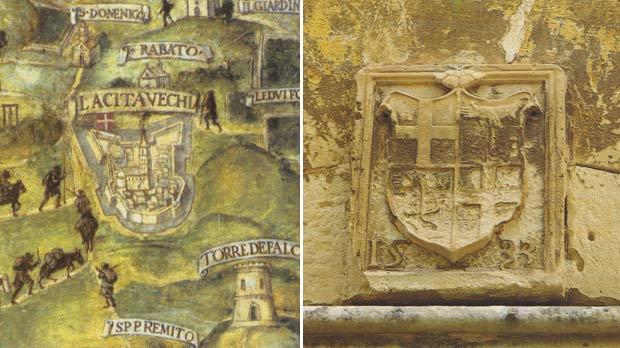 Mdina, with its medieval cathedral, whose Status Animarum sheds light on the morality of the parishioners. Detail from the fresco of the Siege of Malta at the Palace, Valletta, by Matteo Perez d’Aleccio. Right: Armorial shield of Grand Master Philippe Villiers de L’Isle Adam, dated 1533, in the courtyard of the old Sacra Infermeria in Vittoriosa. Photos from the archives of the late Anthony Marquis Cassar Desain, courtesy of the family.

Malta was in many respects North African rather than European, with the exception of the Castrum Maris (Fort St Angelo ) and its suburb, and Mdina with its suburb, following two centuries of European connections, mainly maritime, in the pre-Knights period, as well as the admixture of various ethnic entities from Pisa, Venice, Aragon and Sicily, with their western administration. In spite of the westernising influences of the Knights, this situation in the small villages and hamlets remained securely anchored in the past.

The great divide in customs, mores and moral attitudes encountered between the urban and rural districts of the Maltese islands lingered on in the late medieval period. In many respects, when time in these remote places had stood still as if in a time warp. This chasm was totally shattered in one mighty stroke with the social revolution caused by World War II (1940-1945) when there was a mass exodus from the harbour towns seeking refuge in the inland villages.

The learned anthropologist Jeremy Boissevain remarks that town and village dwellers “learned from each other... It is not surprisng that many Maltese, especially in the villages, regard the last war as a social milestone”.

The noted historian Ernle Bradford describes the refugees as the return “to peasant roots of a semi-sophisticated people; and the encounter for men and women who lived entirely within a circumscribed village, with their cousins from the early 20th century”.