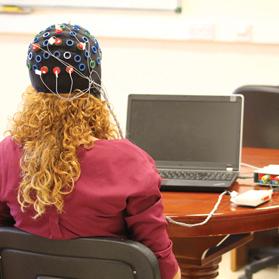 The music player developed by Maltese engineers works by reading the brain activity of a user.

Imagine controlling a music player just by looking at your laptop. Engineers from the Department of Systems and Control Engineering and the Centre for Biomedical Cybernetics at the University of Malta, led by Kenneth Camilleri, are doing just that.

After having studied the best way to obtain the desired brain response, these engineers created a brain-controlled music player. Their work was presented at the 6th International Institute of Electrical and Electronics Engineers/Engineering in Medicine and Biology Society Neural Engineering Conference in San Diego, California by team member Owen Falzon.

The researchers developed the system to improve the life of individuals with severely limited motor abilities. Just looking at flickering boxes on a screen controls the music player, no actions are needed. This brain-computer interface technology could be the basis of emerging user interfaces for smartphones and tablets, as recently seen in worldwide media attention given to Samsung’s development of similar systems.

The system works by reading the brain activity of a user. The brain works by sending electrical signals; these are picked up by electrodes placed at specific positions on the scalp through a process known as electroencephalography (EEG). These EEG recordings are then used to convert patterns of electrical brain activity into computer commands.

The commands control the music player without the need of any physical movement; the user just needs to look at the right box. The program figures out where the user is looking through his or her brain patterns, allowing the music player to be controlled.

The system, developed by Rosanne Zerafa (supervised by Tracey Camilleri) reads a unique brain pattern. This pattern occurs when a person looks at a light which is flickering at a certain frequency resulting in their brain synchronising at the same rate. The electrodes can pick up this pattern.

By having boxes flashing at different frequencies, corresponding to a play button, up/down button or increase/decrease in volume, the system can tell if a user wants to start a new song, move on to the next one or pump up the volume. The user just needs to focus their attention on a flashing box.

The music player is based on typical smart phone app designs. The design is coupled to flashing boxes to trigger the brain and control the app. The performance of the music player was tested on users at the Biomedical Engineering Laboratory at the University of Malta. Participants could reliably control the music player after it was calibrated to their brain patterns.

The system developed is based around a music player application. The same concept can be extended to various other applications, such as for environmental control or assistive living. Further research is currently being undertaken with these other applications in mind.

These BCI devices are being developed for people with severe movement difficulties, like sufferers of cerebral palsy or motor neuron disease. As they become more commonplace they could revolutionise how human beings interact with the world around them.