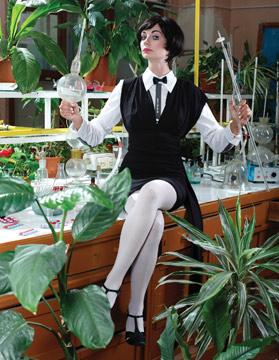 Theatre
The Pill
The Splendid, Valletta

In labs all over the world, scientists are still toiling away looking for a miracle cure to quell all ills – an as-yet unattainable goal which keeps modern medicine on its toes.

In their version of ‘the universal search for the restorative properties of an all-curing panacea’, The Rubberbodies Collective promises a ‘new poetic perspective’ on our quest to end ailment and discomfort in their production of The Pill.

Written, researched and performed as a solo act by Ira Melkonyan, herself a scientist as well as an artist, The Pill is described as “a personal journey of pharma-fantasy”.

Staged at The Splendid in Strait Street, Valletta, the large, grotty sala nobile upstairs was transformed into a clean, clinical-looking lab-cum-lecture room, where a professional-looking, lab-coated Melkonyan began to engage the audience in a public lecture on health and well-being. She questioned them about their own health concerns and dealt with the content easily and matter-of-factly.

The twist came about when the audience was taken on a journey into the scientist’s past – starting from her childhood experiences as a little girl – citing her parents’ two methods for curing ailments – but really exploring family relationships and how childhood interests and fantasies can develop into both careers and obsessions.

The scientist as a young girl, with her trusty stuffed bear called Giraffe, waves her father goodbye on a regular basis as he leaves for long work trips ‘as an astronaut’.

The ailments that she, her sister and mother suffer are all related to the distance and absence of the father figure in the family, leading her to decide to become a scientist and her sister an engineer like her father.

Short vignettes of an Eastern European mad-scientist type and of the young girl experimenting with self-image and awareness through pencil drawings on the wall, interspersed flashes of her adult self dealing with an analysis of a doctoral dissertation.

Familiar to some academic audience members, this drew smiles and nods in agreement at the sometimes frenetic, often lonely and boring work that has to be done.

Melkonyan doubled for several characters and changed her personality and reactions accordingly, sending up stereotypes and exploring human fears and insecurities in a darkly humorous manner.

The wall was dominated by a large representation of a chemical compound constructed out of neon tubing, which was lit up and flashed on and off very effectively during specific climaxes of the unravelling story.

With a little bit of digging on my part (thanks to my chemistry whizz colleague, the much-loved JPTA), I found out that it represented an organic compound: methylamine which smells of rotting fish and is a result of putrefaction.

The Du Pont website lists the creation of pesticides, analgesics, stimulants, catalysts, accelerators and explosives among its many uses.

A fine kettle of fish, so to speak – thus the motif became representative not quite of what is beneficial but of what can be detrimental to human health.

The Pill explored the idea of psychological prophylaxis – where we lull ourselves into a false sense of security as long as we’re under the impression that everything is being done for the best – and made for a very alternative but interesting evening out.

• The Pill is also being staged at The Splendid in Strait Street, Valletta, on Friday, Saturday and Sunday at 8pm.