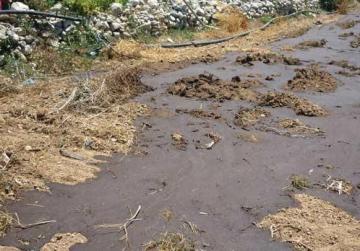 Sewage dumped on agricultural fields surrounding Paul Abela’s vineyard is seeping into the soil and contaminating his water.

A farmer’s three-year struggle to stop bad farming practices in surrounding fields has failed to stem high levels of cancer-causing nitrates in his water supply, despite reporting the problem since 2011.

The problem Paul Abela faces is caused by farmers in adjacent fields paying bowsers about €13 to dump slurry (sewage) over their crops, a practice that is illegal.

The sewage is gathered from cesspit cleaning services at private residences, animal farms and mobile toilets.

When spread on agricultural fields, it seeps into the ground, contaminating the water supply.

The slurry spurs plant growth and provides good yields even if the safety of the food is questionable as contaminants travel through the food chain.

He said checks were randomly made at the farmers’ market at the pitkali but avoiding detection was easy as farmers sell it directly or pass it on to hawkers, while consumers purchase the produce having no clue about the possible contamination.

A €1.4 million EU-funded project educating farmers in the proper use and management of nitrates in agriculture came to an end last year.

It provides good yields, even if the safety of the food is questionable

Mr Abela insists he is a keen farmer who applies the knowledge to improve his produce but he is frustrated that others insist on cutting corners to save money.

Documentation seen by Times of Malta shows Mr Abela has filed reports since 2011 with the Malta Resources Authority, the police, local council and the Malta Environment and Planning Authority.

Inspectors did visit the fields but Mr Abela said: “They warn the farmers and nothing happens.

“After a while, the farmers get back to doing what they’ve always done. It’s the same people.

“They know who they are so it should be easy enough to stop them. I am seriously worried because their products end up on the market.”

Questions sent to the public health department related to checks on food safety were unanswered.

When Mr Abela took the initiative to test his water in 2011, the results, seen by Times of Malta, showed cancer-causing nitrate levels beyond permissible levels.

This raises questions on the quality of agricultural produce across the island since farmers use boreholes to extract groundwater for their fields. Agricultural practices are a major part of the problem because the main source of nitrate pollution in groundwater is the excessive use of natural and artificial fertilisers.

Despite these results and his reports, slurry dumping continues. The practice normally starts after June when the fields of wheat have been harvested and the soil is being prepared for other crops.

“The surrounding fields have been flooded with sewage several times since I took these tests. This could only have made the situation worse. I confront them when I see them,” Mr Abela said, adding he had been the victim of vandalism several times. As he explained that he sells his wine to a local producer who exports the product, he pointed to a passing bowser advertising ‘liquid waste services’.

“That’s one of them, look. I’m tired of reporting him dumping sewage on these fields,” he said.

The number plate was the same as one given to the authorities in a report filed by Mr Abela.

When contacted, the agriculture department said it followed “each and every complaint” on nitrates abuse. Those found in breach were given a time frame to draw up crop and fertiliser plans to regularise their position, with penalties only triggered by lack of compliance or repeated breaches.

Consumers ranked food safety as their top priority for agricultural policy, according to a 2006 Eurobarometer survey. Respondents felt “ensuring agricultural products are healthy and safe” was more vital than “ensuring reasonable food prices for consumers”.