Much hype and expectation had been generated among NGOs and other people who follow planning developments in Malta about the much-touted launch of the Strategic Plan for Environment and Development (Sped). In a number of fora, such as the Standing Committee on Environment and Planning Development, when NGOs appeal­ed for the flood of recent planning policy changes to be put on hold until Sped was in place, they were assured it was a question of weeks before the plan would be out.

Sped is meant to serve as a sort of the planning ‘Magna Carta’ for the Maltese islands, plugging the lacuna left after the Structure Plan expired in 2012. The expectation was also understandable given the relevance of the Sped report. One only has to think about the countless policies included in the voluminous Structure Plan which have served to support legitimate arguments in Mepa case officers’ and objectors’ reports in making the case against objectionable development proposals.

Rather than the authoritative Sped report we were all expecting, only a revamped version of a document issued in 2012 was released, which simply lists key, general principles and very broad objectives which contain very little specific detail or substance.

For instance, listed under Gozo Objective 1 is the following vague statement: “Encouraging better links between Malta and Gozo”. What exactly does this imply?

Similarly, Sped treats complex issues, such as the Marine Strategy Framework Directive (MSFD), with an astounding shallowness – “Facilitating the implementation of the MSFD and work towards good environmental status” – how exactly will such a challenging task, for which Malta lacks manpower and facilities, be achieved?

In the very broad objectives listed under the Coastal and Marine category, one finds:

b) The first mention of a reverse osmosis plant for Gozo. While this might provide a secure freshwater supply to the island is this pre-empting some large-scale water-hungry developments, such as hotels or a golf course?

Rather than the authoritative Sped report we were all expecting, only a revamped version of a document issued in 2012 was released

c) The statement “Making better use of previously developed land on Comino for tourism and recreation-related uses”, which opens up unsavoury scenarios for the largely undeveloped island, especially as it is unclear how the “previously developed land” on Comino will be identified. Will any land ‘disturbed’ by dumping of construction debris, for instance, qualify as such a type of land, simply as an excuse to usher in more uptake of the island?

The report also seems to rubber-stamp the development of an airstrip in Gozo, as well as the siting of yacht marinas and cruise passenger terminals, without mentioning a single word on site identification. This will lead to speculation.

The ODZ site in question along Salini Road, which is currently undeveloped, lies next to the Salini marshland and salt pans and less than a kilometre away from two petrol stations in St Paul’s Bay. It also lies in an area of high archaeological value in view of an ancient harbour at Salini/Burmarrad.

Incidentally, in 2009, a separate planning application (PA 01804/09) had been filed for the relocation of a petrol station from Tower Road in Sliema to Salini, limits of Naxxar.

a) to establish a policy framework for the location, scale and design of new fuel service stations and their ancillary development with a priority, but not exclusively, for land already committed to industrial development in close proximity to the development zone and 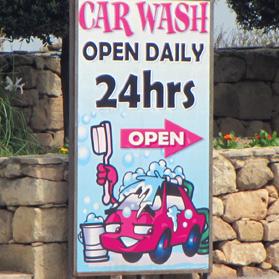 The recent boom of permits for water-squandering car washes undermines the laudable campaigns to raise awareness about the need to conserve water.

b) to provide specific additional guidance on the relocation of existing fuel service stations located within the urban area relating to the allowable increase in the number of pumps, the proximity of the new site to the urban settlement of the existing station and to the road network.

The wording of the objectives, specifically “with a priority, but not exclusively, for land already committed to development” and “allowable increase in the number of pumps” has fuelled speculation that getting a permit for larger and more water-squandering petrol stations (as a result of car washes, which have become the rage) in areas not necessarily committed to development will be easier after the proposed policy is approved.

Since power-washing cars at car washes open on a 24x7 basis has become the latest fad, one wonders how effective water-conservation campaigns, such as HSBC’s Catch the Drop, will be. Instilling awareness about the need to conserve water in the younger generations is commendable, but encouraging grown-ups to use water wastefully, undermines these efforts.

With some of the rubble mounds from the quarry in Inċita Valley in Attard lying less than 200m from residential areas (Thomas Chetcuti Street, for instance), it is understandable that Attard residents feel consternation about the quarry’s operations and have fought long and hard to rectify the situation. But a certain air of resignation must have settled in as all the various efforts, spearheaded by Alternattiva Demokratika exponents, and sporadically, by the local council, have not borne any fruit.

The quarry was granted a licence way back in 1967, constrained by conditions stipulated by the Lands Commissioner such that lease holders were to “rehabilitate exhausted parts of the quarry within 12 months”. But this rehabilitation is quite thin on the ground. Over the years, various illegalities have been reported on site, such as the removal of topsoil and illegal extensions to, and excavations within the quarry, the illegal construction of a brick plant, warehouses and reservoirs, the illegal construction of a bridge over the existing watercourse for excavations to be extended to the Żebbuġ side of the valley and the illegal hoarding, or dumping, of rubble debris, in the form of unsightly mounds which now dominate the landscape in the area.

Despite a flurry of judicial protests and enforcement notices, with the Land Commissioner and Mepa also being involved, excavation in the quarry goes on unabated. Can anyone put an end to this abuse?