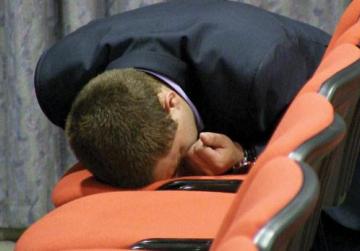 It is not long before they are lost in their own physical displays. Some kneel on their chairs, others spasm uncontrollably.

On a lonely corner of the Żebbuġ bypass, a 1980s wedding hall is bustling. But, unlike most Thursday evenings, bingo is not on the agenda.

The multipurpose venue is the weekly home of controversial Evangelist movement the River of Love, renowned for its intermittent stints in the national spotlight.

Last week, the Christian Fellowship community raised eyebrows when it presented MPs with a 10,000-signature petition urging them to block the proposed Civil Unions Bill. The law will allow gay couples the right to a State-recognised union, as well as to adopt and raise children.

Pastor Gordon-John Manché, who runs the 400-member community, insists his views on homosexuality have been skewed by the media.

He stresses he does not cure gay men, but brings them to terms with their wrongdoing

“My opinion is that homosexuality does not follow the word of God. It is therefore a sin enforced by the devil in this world,” he says, stressing that he does not cure gay men, but brings them to terms with their “wrongdoing”.

Two days after presenting the petition, the pastor invited Times of Malta to attend the organisation’s annual holy conference, a three-day spectacle of seminars, sermons and spirituality. This event, which cost members €10, has never been documented by the press.

Run by Pastor Manché, the four-hour conference, which included the participation of international pastors, had all the staples of a religious movement based on the fire and brimstone of the Old Testament.

Like most of the church’s meetings, the evening opened with an hour of hymns. The traditional organ was swapped for the type of backing track melodies normally heard in elevators and hotel lobbies. The choir and the 150-strong congregation traded hymn books from a projector screen hung above a six-foot neon crucifix. 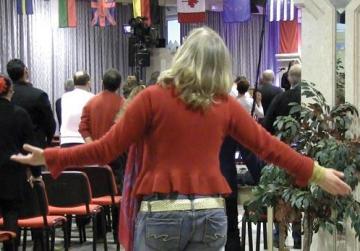 Enter Pastor Manché. The 41-year-old had moved to the UK and later to the US to train as a professional ballet dancer. While in Houston, Texas, he had a life-changing experience that led him to “give his life to Jesus Christ” and join the Rhema Bible Training Centre.

After years of training, he was ordained in 2003 and eventually, after travelling around the world as a missionary evangelist, he returned to Malta and set up River of Love in 2006.

The Sapphire Suite where the conference is taking place is his stage. Prowling the altar in a grey three-piece suit, he commands the sermon like a rock star.

With “Amen” as his punctuation mark, the crowd reply in tandem, “Amen” to practically every sentence. The room is electric with the congregation’s anticipation.

His message is simple: “Spread your faith throughout your community.”

The pastor’s sermon is constantly translated into Maltese by a member of his pastoral team.

The congregation clearly idolises Dr Manché. The deeper he delves into his sermon the more his vernacular progresses, taking on an American twang.

In the pews, families gather and children choreograph dance routines to the communal songs. Others pray, while those more taken by the drama of the evening take to speaking in tongues which, on the face of it, seem to be based on Aramaic.

It is not long before most of the congregation are lost in their own physical displays. Some kneel on their chairs, others spasm uncontrollably.

The evening’s anticipated speaker walks out on to the altar – Dr Terry Mize is an American pastor with all the frills. His sermon focuses almost entirely on a re-enactment of an evening in which he claims to have cured famous tennis champion Margaret Court of scoliosis.

“Ms Court walked into the church and was touched by the Holy Spirit. She said ‘Pastor Terry, I got me some scoliosis all up in my back. My hip is high on one side and my back is bent double’,” he said, prompting a round of “Amen” and “praises” from the Maltese congregation.

“She was thrown to the ground by the Lord’s might and there she lay for three hours. When she awoke, she was cured,” he added, stirring a ripple of shakes and cries of “Amen” from the congregation.

Among the local ‘miracles’, he claimed he ‘cured’ a swollen finger of one local engineer and eased the headache of a young woman.

The River of Love and its Civil Unions Bill petition will be the topic of discussion on Times Talk on TVM at 6.55pm today.