Fabien Cousteau, grandson of famed French oceanographer Jacques Cousteau, emerged from the turquoise waters off the Florida Keys after a record-breaking 31-day stay underwater with a team of scientists and documentary film-makers.

The younger Cousteau, 46, along with two ‘aquanauts’, took the 18-metre dive to Aquarius, a laboratory submerged near a coral reef off Key Largo, on June 1 following years of preparation and delay.

“This expedition’s main goal was to reach as many people around the world ... to impassion future generations to care about the oceans, to cherish them, to be curious about them in a way that existed during my grandfather’s era,” Cousteau told a news conference after surfacing.

While Cousteau’s goal was to attract more support for ocean conservation, teams of scientists from the Massachusetts Institute of Technology and Northeastern University rotated through the laboratory studying the impact of changing seas on underwater life. 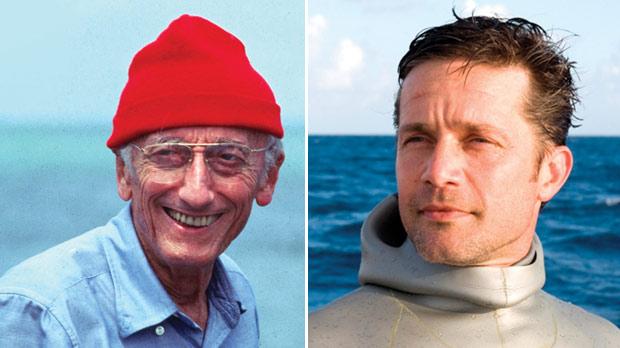 Jacques Cousteau. Right: Fabien is pictured on his first dive outside the marine laboratory.

The ability to live underwater allowed researchers to leave the habitat several times a day, including the middle of the night, to collect samples from nearby coral reefs and observe marine life in otherwise impossible circumstances.

Aquarius is air-conditioned and equipped with wireless internet access, a shower, a bathroom and six bunks, as well as portholes that gave the occupants a 24-hour view of the surrounding marine life.

Despite a successful trip, the month-long stay was not without its challenges.

“One night the air conditioning stopped working and it got to 35˚C and 95 per cent humidity,” said Andrew Shantz, a PhD candidate in marine eco-science at Florida International University, who spent 17 days in the lab in the beginning of June.

“We saw a Goliath grouper attack a big barracuda, which is something I never imagined happening,” Shantz said.

Shantz said he was able to collect six months worth of data in 17 days.

The previous record for living under water was held by Cousteau’s grand-father, who in 1963 spent 30 days in a similar facility in depths of about nine metres in the Red Sea.