Evidence of a colony of pterosaurs that lived around a desert lake in southern Brazil around 100 million years ago has been uncovered by scientists.

Fossil remains of at least 47 of the previously unknown flying reptiles, with wingspans ranging from 0.65 - 2.35 metres, were discovered at Cruzeiro do Oeste.

But the huge number of bones could represent hundreds of young and adult individuals, scientists believe.

It is the first time scientists have located a pterosaur "bone bed" containing fossils from many individuals of the same species.

The site where they were found covers an area of less than 20 square metres.

Caiuajara dobruskii had a large bony crest on the top of the head that changed from being small and inclined in juveniles to large and steep in adults.

It is thought to have been a gregarious species that learned to fly at a very young age. 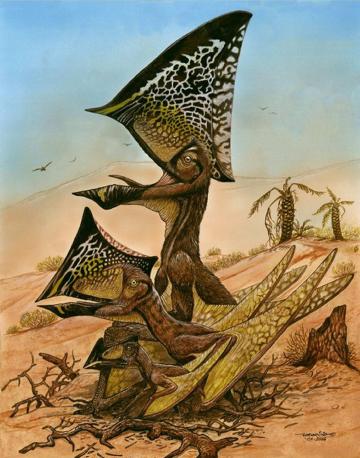 Led by Dr Alexander Kellner, from Federal University of Rio de Janeiro, the scientists wrote in the online journal Public Library of Science ONE: "Based on the available information, we conclujde that Caiuajara dobruskii lived in colonies around an inland lake situated in a desert..

"The presence of three main levels of accumulation in a section of less than one mtre suggests that this region was home to pterosaur populations for an extended period of time. It is also plausible that Caiuajara was a migratory pterosaur that visited this area from time to time, although the first possibility is favoured here.

"The causes of death remain unknown, although similarities with dinosaur drought-related mortality are striking. However, it is also possible that desert storms could have been responsible for the occasional demise of these pterosaurs."

The fossil record of pterosaurs, which lived alongside the dinosaurs but were unrelated to birds, is patchy.

Their bones were fragile and few of the creatures lived in places where fossils form easily, making pterosaur finds rare.

Most have consisted of incomplete skeletons of a single individual.