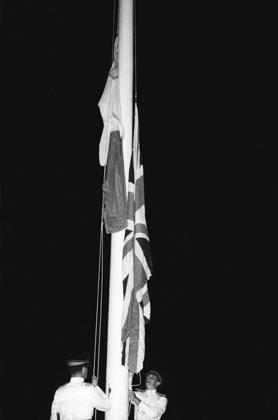 The flag-raising ceremony was described by Major Alfred Cassar Reynaud, the soldier chosen to hoist the Maltese flag at the Independence Arena in Floriana, as “an overwhelming evening”.

It was December 1957 when in a rare show of national unity, the Maltese Parliament unanimously approved the Break with Britain Resolution.

By then talks with the British government over then prime minister Dom Mintoff’s plan to integrate Malta with the UK had run into trouble.

Malta’s political class declared that this tiny island with no natural resources, which depended heavily for survival on the British military presence, would sever its ties with the colonial masters.

The governor declared a state of emergency and troops were placed on standby to help the police. In some parts the anti-British protests took a violent turn with various police stations being ransacked.

With Dr Borg Olivier refusing to form a minority government, the governor declared a state of emergency; took over the country’s administration and suspended the 1947 constitution.

The road to independence had encountered serious turbulence since this was the first time in decades that Malta did not have a constitution that provided for self-government.

It was only in 1961, after four years of direct rule from Britain, that Malta was awarded a constitution. Known as the Blood Constitution after Sir Hilary Blood, who chaired a constitutional commission, the supreme law made provisions for elections to be held once again.

But by 1958 the yearning of the Maltese for independence had been cemented with the manifestos of the two major parties for the 1962 election proposing independence. Where they differed was in form.

Dr Borg Olivier’s support for the Break with Britain Resolution was not out of synch with his party’s past stand. Having opposed Mr Mintoff’s plan for integration with Britain, the PN had in the 1955 election, which it lost heavily, proposed dominion status.

Dominion status was a half-way road to independence that would have led to self-determination, except for foreign and defence matters, which would have been the shared responsibility of the UK and Malta.

In 1962 Dr Borg Olivier was ready to accept an independence constitution at the same time as entering into a defence agreement with Britain and retaining a close relationship with the UK.

On the opposite end, Mr Mintoff believed any cooperation agreements would have to be negotiated after independence as a sovereign State because it would give the country greater negotiating leverage.

With an economy heavily dependent on British government spending and the presence of a military base, the 1962 PN manifesto had etched out the principles that would later guide Dr Borg Olivier’s negotiations with the UK.

“The party is convinced that the solution of Malta’s problems can be found only when our country attains full and independent membership in the family of the British Commonwealth that is what has long been understood by Dominion Status.”

While independence went further than the status advocated by the PN in the 1950s, Cabinet memos from the post-independence Borg Olivier administrations paint a complicated relationship between a sovereign state and the British forces stationed on the island.

Various government decisions were in part conditioned by the presence of British forces. A proposed expansion of the airport and the construction of a new air terminal, towards the end of the Borg Olivier period in 1971 had to factor in the British military’s needs.

The Labour Party rooted for a complete break, even if it subsequently renegotiated the terms of the military agreement with Britain in 1971 and extended the lease of the military base until 1979.

However, in its 1962 manifesto, the Labour Party etched its belief that independence was the key that opened the gates of new avenues that led to peace, progress and prosperity.

“We cannot turn back and take shelter in the cellars of British colonialism for fear of the storms which await all those who take to the highway. The old structure is cracked and if we hesitate much longer we will be buried under its debris.” 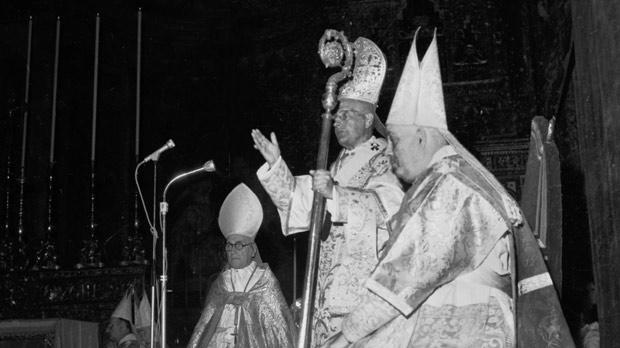 The Church, headed By Archbishop Michael Gonzi, had an impact on the political climate in the run-up to Malta’s independence. Photos: DOI

The PN went on to win the 1962 election, held under the shadow of the Church’s edict that voting for the Malta Labour Party was a mortal sin.

Soon after taking office as Prime Minister, Dr Borg Olivier immediately made a formal request for independence and lengthy talks got under way.

In 1963 a constitutional conference was held in London and on August 1, the UK government announced that Malta would become independent not later than May 31, 1964.

Dr Borg Olivier put the independence constitution to the vote in a referendum held over three days in the beginning of May 1964.

The referendum result gave Dr Borg Olivier the popular mandate he was seeking after 65,714 voted Yes while 54,919 voted No. Another 9,000 spoiled their ballot.

Controversy over the legitimacy of the result ensued but it was amply clear that with the majority of No voters being Labourites, there was an overwhelming majority in the country in favour of independence, whichever form this took.

Independence Day was pencilled in for September 21 after initial suggestions to have it on September 8 were turned down by the Maltese government.

The flag-raising ceremony was described by Major Alfred Cassar Reynaud, the soldier chosen to hoist the Maltese flag at the Independence Arena in Floriana, in a 2009 interview with Times of Malta, as “an overwhelming evening”.

“The lights in the arena were dimmed and the flag had to be hoisted within seconds,” he recounted, recalling the shiver down his spine as the Maltese flag made it to the top. “It was a moment to cherish.”

And there were some 100,000 people in the parade ground that night cherishing the moment when for the first time in its long history of domination by foreign powers, Malta took the reins of destiny into its own hands.

On the fringes of the celebration Labour supporters protested at what they believed was “a farce”.

Dr Borg Olivier became the first prime minister of an independent Malta that retained the Queen as its Head of State and remained firmly anchored within the western bloc at a time when the Cold War was at its height.

Independence was part of a package that included retaining British defence facilities for 10 years and financial aid to the tune of £51 million.

Nato’s Mediterranean branch headquarters, in Floriana were also retained. This arrangement ensured that British and Nato forces continued to benefit from the islands’ strategic location.

The country took its seat at the United Nations as an independent country on December 1, 1964.

On the domestic front, the Borg Olivier administration embarked on a programme to gradually transform the economy. The first efforts to attract tourists started in the 1960s when some of the first hotels were set up, encouraged by a policy that granted them favourable terms for development.

Emigration as an economic tool left its toll on many families – Malta’s population experienced its first dip in numbers since World War II – who bade their young ones goodbye as they left for better pastures in Australia.

Two years later the PN was returned to power in the first post-independence election held in 1966. The election was again held under the shadow of the Labour Party’s fight with the Church.

Dr Borg Olivier’s second term lacked the lustre of the previous four years and the PN was eventually voted out of power in the 1971 election.

The next significant constitutional developments happened in the 1970s. Just 10 years after independence, Parliament voted, almost unanimously, for a republican Constitution that replaced the Queen as Head of State with a Maltese President.

An independent Malta was crafting its own future.