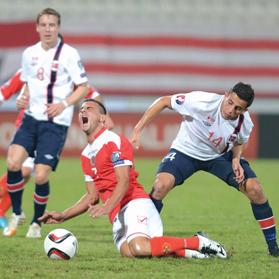 Malta midfielder Clayton Failla grimaces in pain after being challenged during the Euro 2016 qualifying Group H clash with Norway at the National Stadium last night. Malta eventually lost 3-0 after going two goals behind in the first 25 minutes. They are now propping up the table after two games. Photo: Matthew Mirabelli

The vibes emanating from the Malta camp had been upbeat but it took Norway only 26 minutes to snuff out our hopes of a morale-boosting result ahead of Monday’s daunting clash with Italy.

While the home team’s initial willingness to attack was to be commended, it ultimately proved to be their undoing as Norway’s first two goals both came from counter-attacks.

Per-Mattias Hogmo, the Norway coach, had alluded to Malta’s reliance on breakaways to trouble their opponents but it was his team who used that weapon to devastating effect with former Manchester United striker Joshua King thriving in the open space inside the home team’s half.

The inclusion of Roderick Briffa for Steve Borg, suspended, had represented the only change in the Malta line-up from the 2-0 defeat to Croatia in last month’s Euro 2016 qualifier.

Deployed mostly in central midfield under Ghedin, Briffa took up the right-back position in the home team’s 5-3-2 formation but the Valletta midfielder is more attack-minded than his absent team-mate.

While Briffa’s early incursions contributed to Malta’s brightest moments in the first half, the team’s collective failure to deal with Norway’s vertical balls and King’s physical prowess undid their efforts.

It looked as though Norway, who had started their qualifying campaign on the wrong footing after going down to Italy at home, deliberately invited Malta to attack them in those early stages only to hit back with swift breakaways spearheaded by the imperious King who scored a double and had a hand in the first goal.

Andrei Agius, Ryan Camilleri and Zach Muscat were slow and somewhat hesitant every time King powered forward but it was a collective flop from Malta as the midfield failed to track back quickly with Ryan Fenech enduring a disappointing night while Rowen Muscat and Paul Fenech did slightly better but were still overrun by the Norwegians.

Norway may not be one of the leading lights of European football but a glance at their starting XI underlined the scale of the challenge our national team face in international matches as Hogmo’s selection was replete with players engaged with foreign clubs.

Captain Per Ciljan Skjelbred is on the books of Hertha Berlin, Havard Nordtveit plays for Borussia Moen-chengladbach, Alex Tettey at Norwich and King for Blackburn.

Hogmo signalled his attacking intentions by setting his team out in a 4-3-3 formation with Mats Moller Daehli, Tarik Elyounoussi and King in attack. Martin Odegaard, the 15-year-old wonderkid, was among the substitutes.

There was an uplifting moment before kick-off as the two teams and match officials posed for a group photo to promote UEFA’s campaign against racism.

Hogg was soon called into action as an interchange between King and Daehli unsettled the Maltese defenders who were unable to clear. King was quick to retrieve possession before playing through Daehli whose curling drive was smothered away by Hogg.

The hosts created a semblance of a chance on 14 minutes when Briffa switched passes with Schembri and the latter’s dipping cross flew towards the steaming Clayton Failla but the Hibs speedster miscued his first-timer.

Hogg then did well to fist away Stefan Johansen’s corner.

Briffa’s ability to drift into dangerous positions from his right-sided position was giving added impetus to Malta’s attack but, from a counter-attack, Norway seized the lead on 22 minutes.

And the danger emanated from the left as King, who had nipped behind Briffa, galloped into the open space, held off Zach Muscat and produced a delightful reverse pass to release Daehli who was unmarked into the box. The Cardiff forward kept his cool to prod past the goalkeeper.

Ghedin’s men were again caught on the counter as the towering King latched on to a quick pass from the back, outsmarted his marker and hammered past Hogg.

For the second time in four minutes, Malta paid the price for leaving too many gaps in their own half as the midfielders had pushed upfield.

King’s strength and purposeful movement was tormenting the Malta defenders. On the half-hour, he had the better of Zach Muscat and crossed for Tarik Elyounoussi who poked home but the Hoffenheim forward was offside.

It took Malta a while to come to terms with Norway’s double advantage. Five minutes from half-time, the red-shirted players constructed a promising move as Briffa, again cutting in from the right, picked out Mifsud who controlled well but his rising shot was too central to trouble Orjan Haskjold Nyland.

On the cusp of half-time, Malta won a free-kick in an inviting position but Failla’s drive came off the defensive wall.

Norway were first to threaten at the start of the second period. Skjelbred put in a teasing ball into the area but Elyounoussi speared his shot over.

When Agius, venturing out of defence, was dispossessed on the halfway line, danger loomed for Malta. The visiting team were quick to transfer the ball forward and Skjelbred’s perfect cross was headed in by King.

Elabdellaoui blasted wide after racing into the box as Norway continued to call the tune and, on 56 minutes, Hogg was quick off his line to anticipate King after the latter had powered his way past Agius.

Malta toiled to stem the tide.

Daehli twisted and turned before producing a firm drive that was stopped by Hogg. Jone Samuelsen was wide after getting at the end of a cross at the far post.

Midway into the second half, Malta had a good chance to reduce the arrears as Paul Fenech’s pass freed Mifsud who sidestepped his marker but in so doing drifted too wide of goal. The captain’s ensuing cut-back lacked precision.

At the other end, Hogg again denied King who had darted past Camilleri.

Ghedin made a double substitution, bringing on Justin Grioli and Bjorn Kristensen for Briffa and Ryan Fenech.

In stoppage time, Zach Muscat prevented Norway from adding to their lead as the Birkirkara defender made a timely tackle to flick the ball away from Havard Nielsen who looked certain to score from Elabdellaoui’s cross.

Pietro Ghedin (Malta coach): “We conceded two goals in quick succession and that all but killed our hopes. Norway played at a very high tempo and we struggled to contain them.

“Our performance was also marred by a series of defensive blunders and we gifted them one of the goals. Mistakes have again been our undoing... we can never be competitive at this level if we keep repeating the same errors.

“Now we have to focus on the match against Italy. My players spent a lot of energy today but we have two days to recover and, hopefully, we will be ready for another tough test.”

Per-Mattias Hogmo (Norway coach): “I am pleased with the performance of the team. We adopted an attacking game plan and hit Malta with quick breaks... I think my players did that very well.

“We had two young forwards in Joshua King and Mats Daehli but they did well and I’m sure that with every game they play together their understanding will continue to improve.”