Fans of the new Teenage Mutant Ninja Turtles film should think twice before buying their own mini "hero in a half-shell", conservationists are warning. 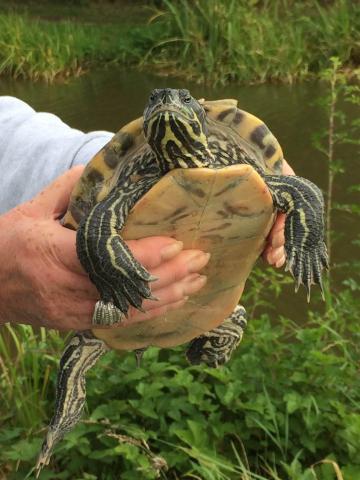 The original Ninja Turtles craze in the 1980s and 1990s saw thousands of match-box sized baby terrapins being bought as pets, the Canal & River Trust said

But as the reptiles from North America grew to the size of dinner plates, many got too big for domestic tanks and were often released into the wild where they prey on native wildlife from dragonfly larvae to ducklings.

The Trust, which looks after 2,000 miles of historic canals and rivers in England and Wales, is urging people not to make the same mistake this time round, ahead of the film's release.

Mark Robinson, national ecologist for the Canal & River Trust, said: "Like any baby animal, young matchbox-sized terrapins are pretty cute but people need to understand what they're taking on when they buy them as pets.

"They can be pretty big, pretty grumpy and pretty smelly which means that sadly some people just fall out of love with them.

"Terrapins can live for up to 40 years and we're still dealing with the effects of the last turtle power craze with hungry terrapins munching their way through our native wildlife including dragonfly and damselfly larvae, small fish, frogspawn and even ducklings.

"It harms the ecology of our canals and makes them less special places to visit."

The trust is advising people to do their research and understand what they are taking on before they buy a terrapin, and if they are struggling, to speak to a local pet shop or animal charity about re-homing - not release it into the nearest waterway or pond.