Pope Francis said Islamic militants were carrying out a “profoundly grave sin against God” in Syria and Iraq, calling yesterday for inter-religious dialogue and action against poverty to help end the conflicts there.

Turkey is sheltering nearly two million refugees from Syria, thousands of Christians among them.

At a joint service with Patriarch Bartholomew I, spiritual head of the world’s 300 million Orthodox Christians, at the end of his weekend trip to Turkey, Pope Francis said people of all faiths could not remain indifferent to the cries of the victims of the “inhumane and brutal” war next door.

Taking away peace, committing violence, is a profoundly grave sin

“Taking away the peace of a people, committing every act of violence, or consenting to such acts, especially when directed against the weakest and defenceless, is a profoundly grave sin against God,” he said.

Pope Francis also condemned Friday’s attack on Muslim worshippers at the main mosque in northern Nigeria’s biggest city, Kano, in which at least 81 people were killed.

He later met around 100 young refugees, mostly from Iraq and Syria, Christians and Muslims among them, and thanked Turkey for sheltering so many displaced civilians. A girl in the group spoke to him about the plight of Christians forced to flee Iraq. 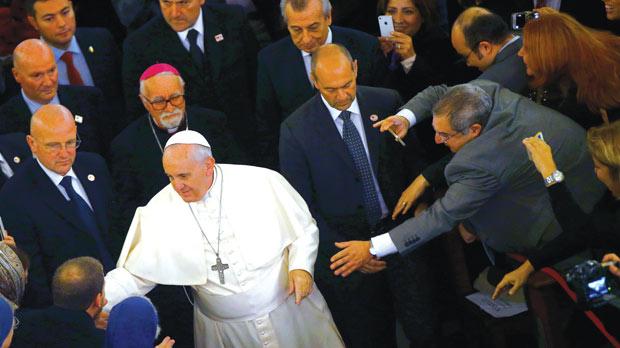 A man reaching to touch Pope Francis at the Catholic Cathedral of the Holy Spirit in Istanbul, Turkey, yesterday. Photo: Reuters

It was the third time in as many days that the Pope had mentioned Islamic State insurgents, who have killed or driven Shi’ite Muslims, Christians and others who do not share their radical brand of Sunni Islam out of swathes of Syria and Iraq.

The Pope said stopping poverty was key, partly because it gave rise to “the recruitment of terrorists”. He has said that, while it is lawful for the international community to use force to stop an “unjust aggressor”, lasting solutions must be found.

In a separate joint statement issued during the service at the Ecumenical Patriarchate, the official seat of the Orthodox Christian patriarch, Pope Francis and Bartholomew said: “Muslims and Christians are called to work together for the sake of justice, peace and respect for the dignity and rights of every person, especially in those regions where they once lived for centuries in peaceful coexistence and now tragically suffer together the horrors of war.”

The leader of the world’s 1.2 billion Roman Catholics prayed in Istanbul’s most famous mosque on Saturday and has used the trip to urge Muslims to oppose the conflict in neighbouring countries.

“The message is that those who use God as a pretext for violence cannot be a true believer,” said Father Claudio Monge, an Italian Catholic priest in Turkey for 12 years who is involved in Christian-Muslim dialogue.

“He is appealing to true believers.”