Malta could have made a surplus of €500 million last year but had instead decided to invest in capital projects, Prime Minister Joseph Muscat said on Tuesday.

Speaking at a press conference, Dr Muscat said that the government surplus made it possible for the government to increase pensions, offer tax refunds and re-pave roads.

Dr Muscat was speaking following the release of finance data which showed that the general government made a surplus of €250.8 million in 2018, a considerable shift from the €70.2 million deficit registered in the so-called government’s ‘consolidated fund’.

Surplus data was calculated on an accruals basis, rather than cash, and took into account various ‘extra-budgetary units’ (EBU), the National Statistics Office explained, with the most significant of those coming from the citizenship scheme. 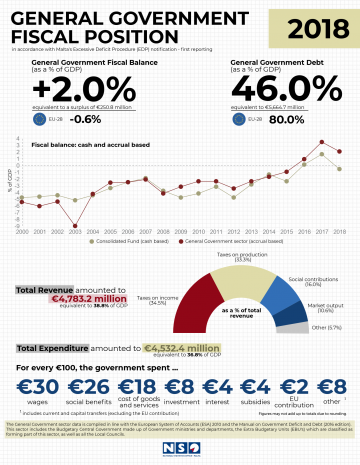 Most of the surplus came from the EBUs, which reached €176.8 million, €21.1 million less than a year earlier.

Although the NSO did now break down how much each EBU - which range from the national orchestra to Heritage Malta - had contributed to national accounts, it did specify that the National Development and Social Fund was responsible for €133.7 million.

The fund gets 70 per cent of Individual Investor Programme funds, which allows wealthy foreign investors to buy Maltese citizenship.

This means that even without those funds, the surplus would have been over €117 million.

There are other contributors to the gap between the consolidated fund’s deficit and the surplus registered by the general government, made up of €208 million from various categories, with €62.5 million subtracted due to Air Malta payments for its assets.

Taken as a percentage of GDP, this represented a positive two per cent, well above the deficit-to-GDP ratio of three per cent – a crucial threshold which EU member states must remain above if they are to comply with their treaty obligations.

Although the government's yearly accounts were in surplus, Malta continues to have overall debt of €5.7 billion - €17.8 million less than in 2017.

Increases in GDP mean that this debt forms a smaller share of Malta's GDP, with the ratio going down from 50.2 per cent in 2017 to 46 per cent last year.

In his press conference, the Prime Minister highlighted how the government had inherited a three per cent deficit in 2013 and turned it into a two per cent surplus.

Debt had also fallen from a high of 70 per cent under the Nationalist government to 46 per cent, he said.

The Prime Minister said Malta’s strong economy and finances meant it had to borrow less and was paying less interest on that borrowing.

Dr Muscat also noted that a surplus would still have been registered without the funds generated from the passport sale scheme.