Philip Leone-Ganado gives an overview of the many tall buildings set to change Malta’s skyline forever, some still on the drawing board, others more advanced.

This year, the high-rise surge is likely to be felt like never before.

Appeals on the controversial Mrieħel towers and 38-storey Townsquare development are nearing their end, with construction expected to start immediately if the 2016 decision to grant permits is upheld.

Meanwhile, however, some seven applications for tall buildings could be decided by the Planning Authority this year for Paceville, Gżira, Mrieħel and Qawra, even as work continues on those already approved.

High-rise proposals have mushroomed every year since the introduction of the Floor Area Ratio (FAR) policy in 2014, which provided for developments in Tigné peninsula, Qawra, Gżira, Mrieħel, Marsa and Paceville.

In Paceville, a glimpse of the future was provided by the first draft of the PA’s master plan, which designated nine different sites for high-rise development, including the Institute of Tourism Studies site where the 37-storey City Centre project has been proposed.

Taken collectively, these developments will undoubtedly alter the fabric of the country, which currently has just eight buildings of 10 storeys or higher in place, and none taller than the 23-storey Portomaso tower.

The argument for this shift has largely been based on the growing demand for high-quality office and residential space, pushed by international investment and, to a lesser degree, existing business growth.

The four Gasan and Tumas towers approved in Mrieħel (and under appeal) were pitched as a milestone in transforming the industrial area into an upmarket financial district. 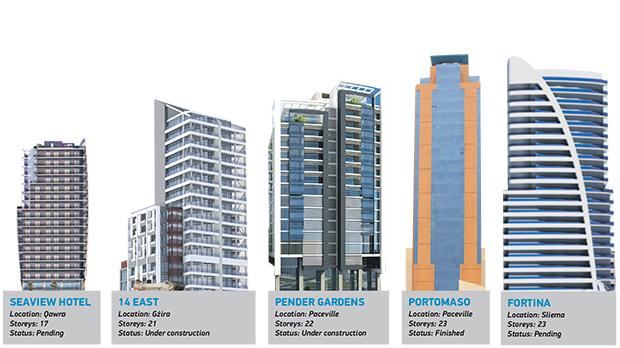 Supporting this economic argument is the notion that building up is the only way to satisfy demand without taking up more virgin land or further congesting urban cores: with Townsquare, developers Gasan Group arguing that the alternative would be 26 individual eight-storey blocks.

Not everyone is convinced. Concerns have been raised about the economic sustainability of the boom, and the mayors of Sliema, Gżira and Pembroke have all expressed fears over the effect of these mega-developments on their towns’ infrastructure and services, while environmental groups have called for a moratorium until a national master plan is put in place.

The impact of high-rise developments is widespread: these projects are each expected to add thousands of daily car trips and create demand for thousands of parking spaces; towers overshadow public spaces and nearby buildings, and even alter wind patterns in the area, besides noise and vibrations in construction periods often lasting years.

The most far-reaching impact could be visual. If it goes ahead, the Townsquare development will peer over the Valletta skyline as seen from Vittoriosa, becoming an indelible part of one of the island’s most iconic vistas. The Mrieħel towers will affect long-distance views of the capital from Mdina, from where the high-rises in Paceville will also be starkly visible.

For now, however, the boom is only set to intensify. It remains to be seen what mark it will leave on the country. 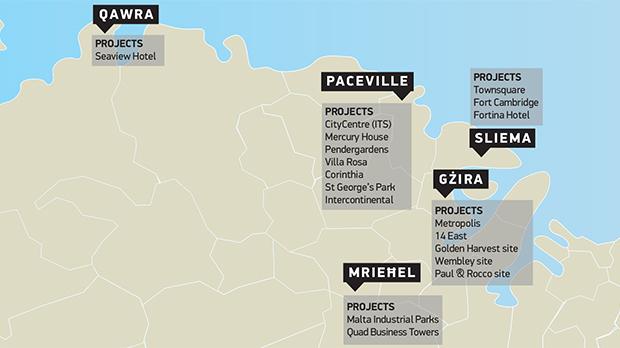 The entertainment area is envisaged as a hub of high-rise developments, with nine different sites identified in the PA master plan draft.

Apart from the existing Portomaso business tower, the Pendergarden high-rise is close to completion, while plans have been submitted for the massive City Centre project in St George’s Bay, which will include a 37-storey residential tower and a 17-storey Hard Rock Hotel. An EIA for the project was recently concluded.

Still on the drawing board are plans for two towers of 40 and 25 storeys at the Mercury House site, while a forthcoming proposal at St George’s Park could rise even higher to 44 floors. Other sites earmarked for development are the Intercontinental and Corinthia hotels, and Villa Rosa above St George’s Bay, for which full details are not yet public. 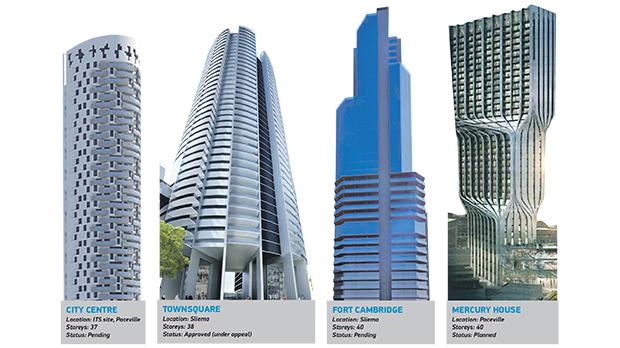 High-rise projects in Sliema are concentrated in the Tigné peninsula, where the ERA recently concluded in the case of the Fortina hotel and spa that the visual impact will not be significant due to the development of the surrounding area.

The Fortina is set to get a new 15-storey residential complex and an extra five storeys on its tower block, bringing it up to 23 floors, as well as another 13-floor hotel block. The plans are under consideration by the PA and were recently exempted from an Environment Impact Assessment (EIA).

Those developments will be dwarfed by the 38-storey Townsquare tower, currently facing an appeal against its approval, and, not far away, a proposal for a 40-storey hotel at Fort Cambridge, the joint-highest planned development. The application is currently awaiting an EIA.

The Mrieħel industrial estate, which was controversially included in the FAR policy after the close of public consultation, is earmarked for a radical transformation, starting with the Quad Towers – the tallest rising to 19 storeys – approved in 2016. An appeal against the decision is likely to be decided in the coming months.

Meanwhile, the government applied last August for a 17-storey tower close to the Methode factory, while another 12-storey private sector development is being proposed on the site of the Meli Bugeja marble factory on the Mrieħel bypass.

Elsewhere, Qawra could get its first taste of high-rise with plans for a 17-floor hotel on the site of the former Sea View hotel. The ERA is objecting to the application, submitted early last year, due to impact on long-distance views.

Long before the FAR policy, Gżira was earmarked for what was planned as the tallest building in Malta. Work on the Metropolis Plaza, which should incorporate three towers of 13, 27 and 33 floors, began in 2015 but stalled due to reported financing problems and has not yet gone beyond excavation.

With the policy’s introduction, the past two years have seen an unprecedented flood of applications. One, the 21-storey 14 East tower on the former United Garage site is already nearing completion, having been granted an extra five storeys this year on top of its original 16.

Three others are being considered by the PA and could all be decided in the coming months: an 18-storey block in place of the old Wembley ice-cream factory, directly opposite the Metropolis development; 29 floors on the Golden Harvest factory site close to the Gżira primary school, and 14 floors at the Paul & Rocco fuel station.