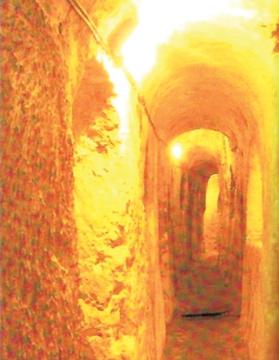 A corridor in St Paul’s Catacombs.

The Punic settlement at the town of Melite, which is today known as Rabat and Mdina, appears to have grown in size during the Roman period (218 BC to about AD500) to accommodate a somewhat larger population inside clear boundaries. These extended from Mdina’s northwestern bastions, up to the area northwest of St Paul’s parish church in Rabat, and from Għeriexem valley up to the church of St Francis and the northern end of Ta’ Saura hospital. A hazarded guess would point to the walled town’s population as having approached 4,000.

Like Malta itself, this main inland walled town was called Melita in Latin. Its full entity is attested to by the significant number of catacombs lying just outside its boundary perimeter wall and ditch. The following is an abridged list of some of these catacombs lying in the Rabat area, and in some cases, of rock-cut tombs lying near the surface. 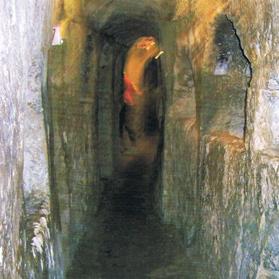 A small catacomb lies at the back of St Paul’s Catacombs, next to fields, under a flooded water cistern by the rocky southern side. This is normally inaccessible to visitors.

A small, long, known catacomb lies in the basement of the modern Girls’ Secondary School, not far from a windmill.

At Upper Taċ-Ċagħqi, on rising ground, in St Thomas’ Street, corner with San Piju V Street, are other catacombs near the street’s surface.

Inside an ancient alley off College Street, some doors up from the boys’ and girls’ schools, an old house, possibly of the Arab period, features a catacomb.

Under St Dominic’s Square and the terraced houses on its southern side, tombs and possibly catacombs, besides World War II shelters, are reported by local residents. The cave, or grotto, dedicated to the Blessed Virgin (Il-Madonna tal-Għar), underneath the Dominican church, functioned as a burial place in Roman times. 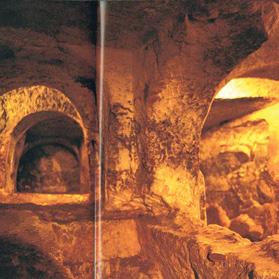 Inside the grounds of Villa Messina home for the elderly, near St Dominic’s Square, the rock face in the garden and pool area features what appears to be part of an ancient rock-arched burial cave, now adorned with a small statue of the Blessed Virgin. Across the square, St Joseph’s Convent and Retreat House, formerly the boarding school known as St Emilie de Vialar, “some ancient tombs were discovered” (Pauline Dingli, 2008).

Nearby, in a modern square, oddly named Vincenzo Ciappara Street, a large rocky outcrop has been preserved and protected in the centre of the square. It features two man-made caves, possibly being rock-cut tombs rather than wartime shelters, or both.

Returning to Rabat’s centre, under St Catald chapel, we find a fair-sized set of catacombs, with arguably a Mithraic feature (Claudia Sagona, 2009).

In Bir ir-Riebu Street, Alley No. 4, a house features underground tombs or catacombs, recently blocked up.

Under St Publius’ church, adjoining the parish church, are catacombs in the cave or grotto of St Paul. They are said to be independent, and allegedly have no access to the Wignacourt catacombs across the street, or the so-called St Paul’s Catacombs lying in their vicinity.

In the esplanade underlying St Paul’s large statue and the ancient chapel of the Penitent Magdalen, a cemetery and catacombs are reported (Alfie Guillaumier, 2008, Fr Victor Camilleri, MSSP, 2008).

At the bottom of Bir ir-Riebu Street, inside L-Abbatija tad-Dejr, lie Byzantine catacombs of the fifth and sixth centuries AD, which are ripe for cleaning and restoration. An important fresco was removed from here in past years for safe-keping to the Museum of Fine Arts in Valletta to avoid further damage (Fr Victor J Camilleri, 2008).

Under the Tal-Virtù round chapel is a Paleo-Christian hypogeum which seems to have consisted of locular graves (Pauline Dingli, 2008). This site lies about one kilometre from Rabat’s centre, just beyond the present Archbishop’s Seminary (Alfie Guillaumier, 2008).

Again at Tal-Virtù, two shaft tombs are found inside an apparently shallow cave in the grounds of a villa on the corner of Alessandro Curmy Street and the gradient of Godwin Ganado Street. The said tomb shafts were hewn at a mutually acute angle. It is reported that the extensive Tal-Virtù area features other Punico-Roman tombs.

Mdina and the western part of Rabat do not feature any catacombs, since Roman law strictly prohibited burial within Melita city of that period. Hence, all catacombs and tombs were to be situated outside the city walls

On the east side of Triq Ħal Tartarni, the main Dingli road just outside Rabat, one hundred metres from the modern Triq tat-Torri junction, and some 50 metres opposite the Nigret Road junction, are caves just above road level inside a rough field where cattle are kept. These caves contain ancient rock-cut tombs, now private and usually inaccessible, but can be partly viewed from the said road.

Mdina and the western part of Rabat do not feature any catacombs, since Roman law strictly prohibited burial within Melita city of that period. Hence, all catacombs and tombs were to be situated outside the city walls, to the east. Main Street in Rabat runs close to the line of the Punico-Roman eastern wall and ditch.

These catacombs have normally been dated to the late third and the fourth century after Christ. Quite a few of them appear to date from Imperial times and are probably pagan. A few others are known to be Jewish, and several are Christian.

Some are of the Byzantine period, of the fifth and sixth centuries AD, hence being necessarily Christian, since that was the prevailing religion during this time.