Sixty-two people died in the hijacking of an Egyptair plane. Christopher Scicluna was among those reporting the dramatic events back in 1985.

Malta suffered the worst 24 hours in its post-war history 35 years ago today as 62 airline passengers were killed in a hijack and botched rescue attempt at Luqa airport.

It was the most tragic hijacking case the world had experienced up to that time and arguments continue over whether the bloodbath could have been avoided.

The Egyptair Boeing 737 had been flying from Athens to Cairo on November 23, 1985, with 100 passengers and five crew on board when it was hijacked by three members of Middle East terrorist Abu Nidal group armed with pistols and hand grenades.

An onboard gunfight ensued and an Egyptian security officer – one of four – and one of the hijackers were critically injured.

Two of the stewardesses were also hurt. 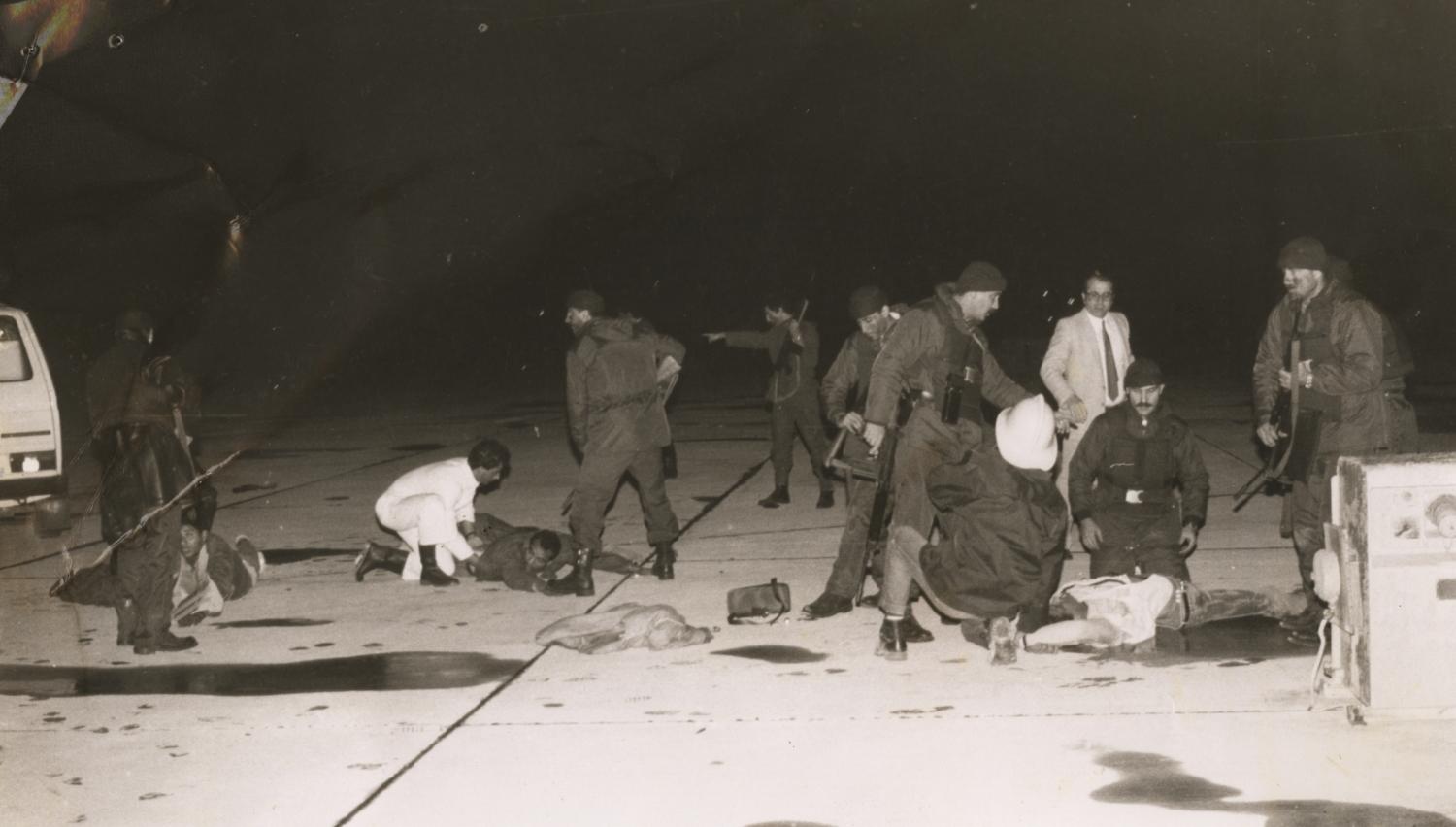 Police inspect the passengers after the bloodbath.

The plane was diverted to Malta and granted permission to land amid fears it would run out of fuel and crash.

The plane landed on a rainy Saturday night and was parked in a remote part of the airport on Park 4. Prime minister Karmenu Mifsud Bonnici, who was attending a Labour Party event at the Mediterranean Conference Centre, rushed to the control tower and took charge of negotiations – as his predecessor Dom Mintoff had done in previous occasions.

The hijackers demanded refuelling the aircraft but the government refused, insisting all passengers should be released first.

A Maltese doctor was allowed on board to see to the injured hijacker – he was already dead.

The two injured stewardesses were allowed to leave the aircraft. Both survived but one of them died a few years later in a plane crash. The injured security guard was dropped out of the aircraft but survived.

Two Egyptian women and a dance troupe of seven Filipino women were released. One of the Egyptians had been on her honeymoon. She unsuccessfully pleaded for her husband to be released too but he was held and later died on the aircraft.

The hijackers then warned they would kill passengers every 15 minutes unless their demands were met.

They had earlier gone around the aircraft collecting passengers’ passports, placing Americans and Israeli passengers on the front seats. 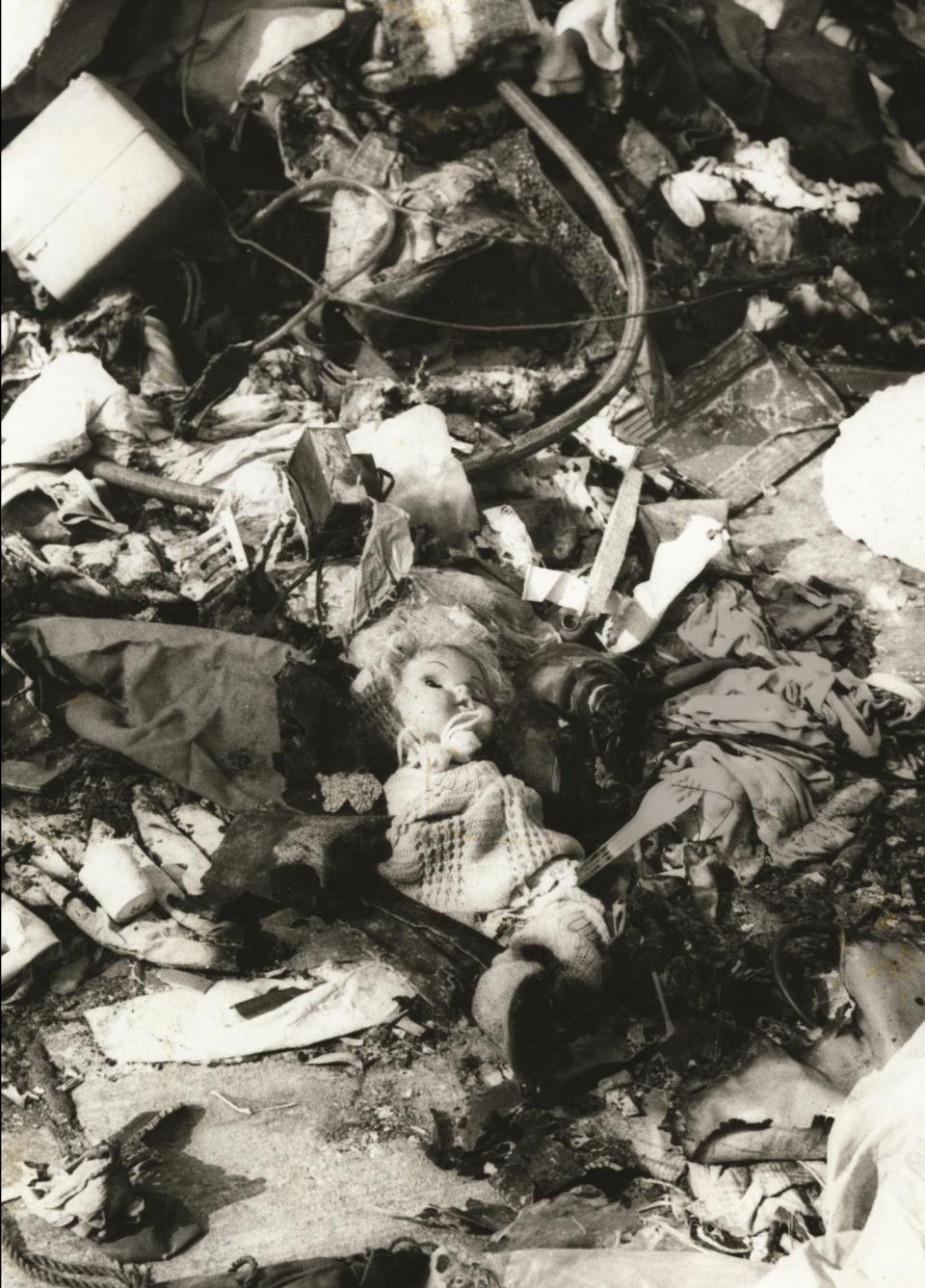 A doll lies among the burnt wreckage.

Chillingly, they started carrying out their threat shortly after 11.30pm. Reporters, huddled at the airport terminal building, could listen in to radio transmissions as a shot rang out. An aircraft door was opened and a passenger was thrown out.

She was an Israeli woman, Tamar Artzi, shot in the head.

Mifsud Bonnici again refused to refuel the plane, saying later in parliament that, at the time, the government thought several other innocent passengers had been killed. He may have been misled by the aircraft captain, who in the radio transmissions inflated the number of those killed to press the authorities to give in to the hijackers’ demands.

As she fell to the ground, another shot was fired at Artzi, still on the wet tarmac with the injured security guard

Fifteen minutes passed and another Israeli woman, Nitzan Nendelson, was dragged to the open passenger door and shot in the head. She died a few days later. As she fell to the ground, another shot was fired at Artzi, still on the wet tarmac with the injured security guard.

Artzi, still conscious, later managed to crawl away from the aircraft and survived.

Further arguments ensued between the hijackers and the control tower, the latter warning there was no chance of refuelling if passengers continued to be killed.

But the shooting resumed on Sunday at 1.30am.

American biologist Scott Baker, who, like other Americans had his hands tied behind his back, was ordered out of the aircraft to the top of the aircraft steps and shot. He fell down the steps but he somehow only suffered a graze to his head.

Baker rolled under the fuselage and then ran away as fast as he could to waiting policemen.

Later that night, the hijackers also killed another American in cold blood, Scarlet Marie Rogen-kamp, also shot at the top of the aircraft stairs. 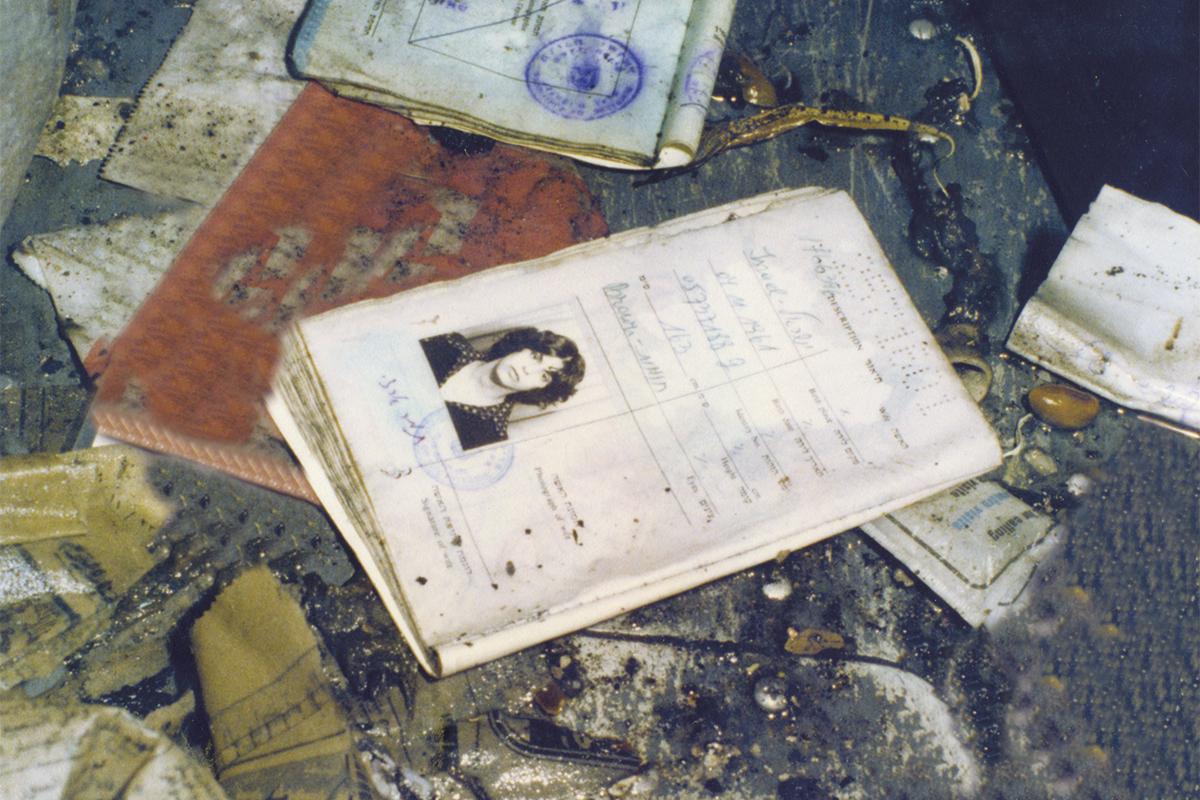 Documents left inside the plane.

Egyptian commandos land at the airport

By this time, the Maltese government had agreed to an Egyptian government request to send in a specialist team to attempt a rescue.

But Egypt did not have a good reputation. In 1978, after another aircraft was hijacked and diverted to Cyprus, Egypt had deployed commandos without even informing the Cypriot government. A gunfight with Cypriot forces saw several killed on both sides.

The Egyptian team arrived in Malta on Sunday morning on a Hercules aircraft. An American offer to help was, however, controversially refused by the government until it was too late.

Meanwhile, at the hijackers’ request, food was taken to the aircraft by police officers dressed as airport staff.

But any hopes that the situation was improving were dashed when another American woman, Jacqueline Pflug, hands tied behind her back, was called to the aircraft door, pushed out and shot from behind, like the others had been.

Egyptair passenger Jackie Pflug recalls the hijack in this 2015 edition of #TimesTalk.

The shooting was witnessed by photographers with long lenses in Qrendi.

She fell onto the tarmac and lay there, unconscious, for five hours until the early afternoon. The hijackers only allowed officials to carry her away after another food delivery. She was later operated upon and survived.

Hours passed and agreement was reached between the government and the Egyptian commandos to storm the aircraft just before dawn of the following morning. The government also agreed to allow the Americans to fly in bugging equipment by the next day – on an Italian aircraft.

But it was to prove too late. 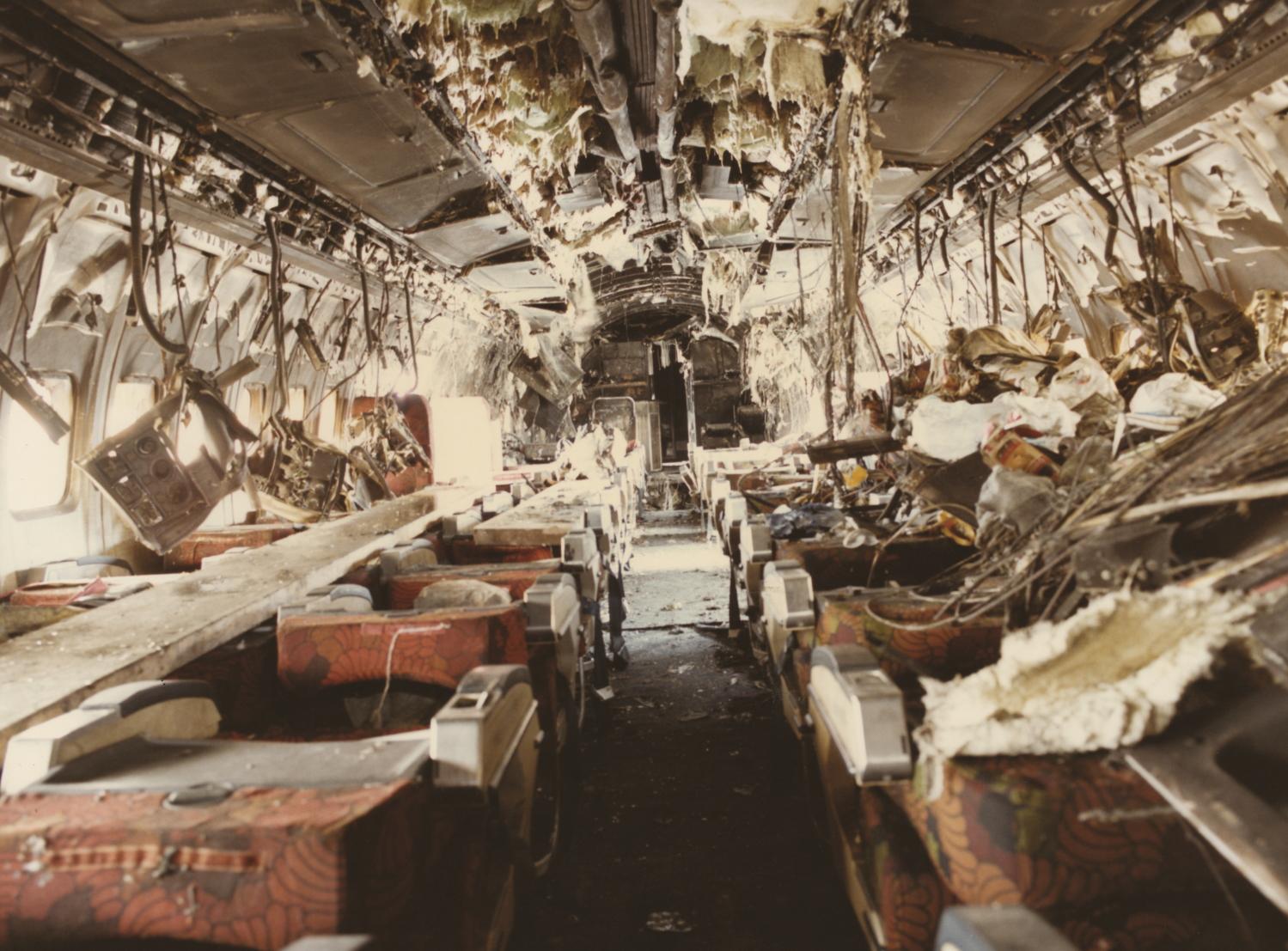 The wreckage inside the plane.

Without even informing the government, the Egyptian troops moved in to attack the aircraft on Sunday evening, hours before the agreed time.

They crawled beneath the aircraft and placed explosives under the fuselage – right below an oxygen tank, as it turned out.

The blast – far more powerful than necessary – caused a fireball in the fuselage and quickly filled the aircraft with thick, poisonous fumes – 52 of the passengers died from suffocation.

The commandos, meanwhile, climbed onto the aircraft wings to gain access through the emergency exits.

Passengers later described how one of the Egyptian commandos broke an aircraft window, thrust in his hand and fired indiscriminately with an automatic weapon.

The objective, it appeared, was not so much to rescue the passengers as to kill the hijackers on board.

The hijackers defended themselves and grenades were thrown, further fuelling the fire which had now spread along the length of the fuselage.

Passengers started streaming out as the pilots jumped from the cockpit windows. The captain was later to claim he hit one of the hijackers with an axe. Some of the passengers were shot by the commandos themselves as they tried to run from the aircraft.

But one of the hijackers did manage to make his getaway. 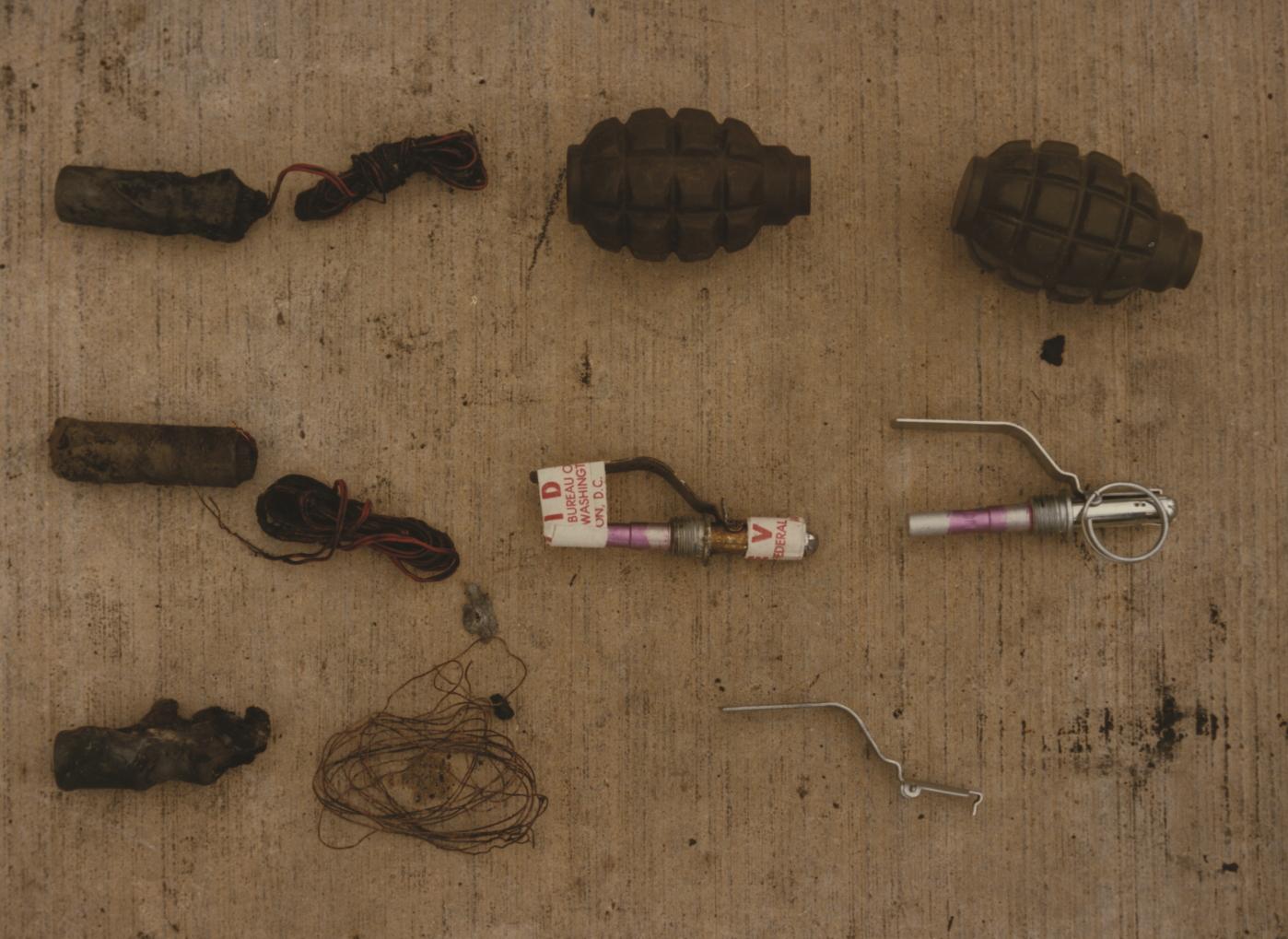 Some of the weapons found on board.

Mohammed Ali Rezaq, later identified as the man who had carried out the shootings, mingled with the passengers. He was picked up and taken to St Luke’s Hospital with other passengers in a white-painted bus and a fleet of ambulances.

But the armed Egyptian commandos – totally ignoring the Maltese government authority – rushed to St Luke’s as well in their hunt for any surviving hijackers.

Tensions soared and there was a risk of a new firefight as the commandos stopped nurses from treating passengers while they looked for the hijackers. The Egyptians were eventually persuaded to lay down their arms by an American diplomat and senior police officers, including then inspector (now Speaker) Anġlu Farrugia.

Ali Rezaq was identified by the passengers and arrested by the Maltese authorities under heavy security – the Egyptians had missed him because he was already in the operating theatre having suffered a collapsed lung,

A morgue was set up in an airport hangar as the dead were pulled out of the smouldering remains of the aircraft fuselage and laid out alongside. The 62 dead included two pregnant women. 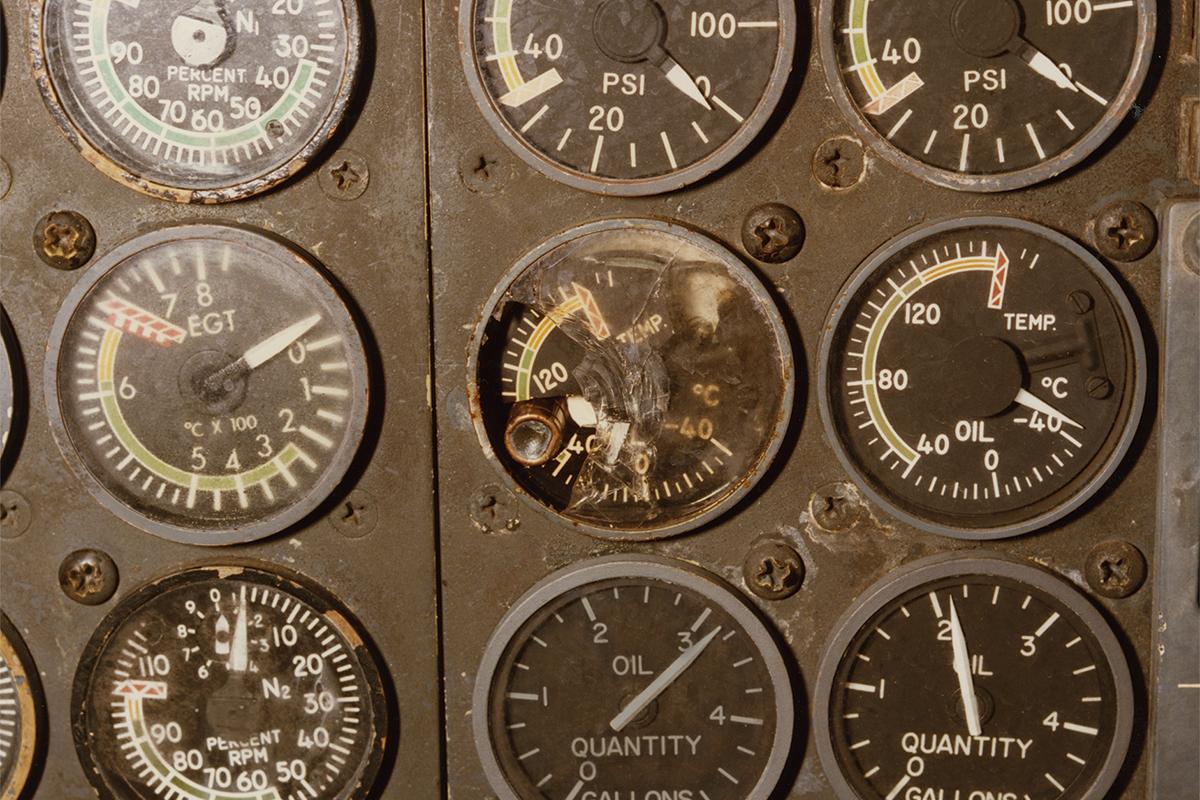 A bullet lodged inside the cockpit controls.

Mohammed Ali Rezaq was tried in a specially set up courtroom behind the thick walls of Fort St Elmo in November 1988.

Incredibly, he could not be accused of hijacking since it was not on the law books at the time but he was accused of the cold-blooded murder and attempted murder of the American and Israeli passengers and the security guard, detention of people, making death threats and possession of weapons. 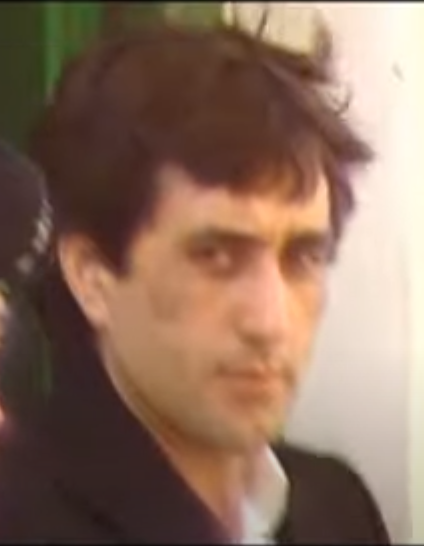 Screen shot of Ali Rezaq being led out of court.

He was sentenced to 25 years imprisonment... but that was not the end of the story.

Much to international consternation, Rezaq was released in February, 1993, having benefited from various general amnesties and the normal reduction of prison sentences for good behaviour. He had served just seven years.

The Malta government argued that it could not discriminate against Rezaq in terms of the law as it applied at the time.

The US said it was ‘shocked and dismayed’ by the decision and the US Congress in a resolution also condemned Malta’s actions.

But, again, this was not the end of the story.

Just three weeks after his release, Rezaq was intercepted and arrested while flying to Sudan. In an operation planned by the US, his flight was diverted to Nigeria. He was taken to the US and faced a new trial for air piracy and murder.

He was sentenced in 1996 to life imprisonment, with no possibility of parole for 30 years. 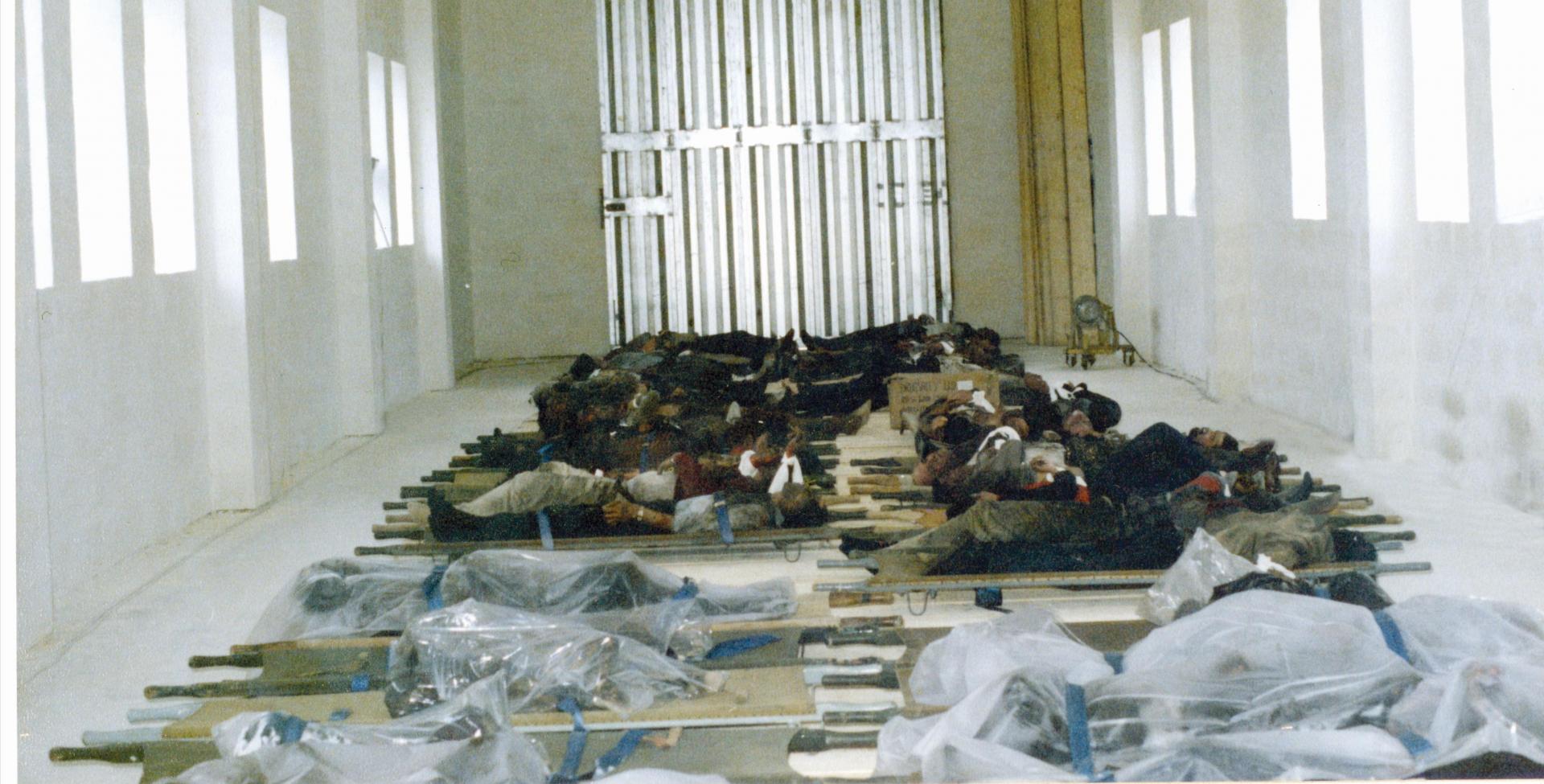 The makeshift morgue in an airport garage.