The National Statistics Office today noted that this number represents 16.5% of the population but that this figure would go up to 23.8% if social benefits were taken out of the picture, and to 37.9|% if old-age benefits and other social transfers were excluded.

This last figure means that 160,957 persons would be considered as being at risk of poverty if they were to rely solely on their household income.

160,957 persons would be considered as being at risk of poverty if they were to rely solely on their household income

The amount of risk increased for those who are employed, retired or inactive, but decreased from 55.7% to 45.1% for the unemployed.

Another indicator used by the NSO is the at risk of poverty or social exclusion (AROPE), which looks at the metric above, as well as the work intensity calculator and the Sever Material Deprivation rate. That figure was 20.1%, down by 2.3 percentage points since 2015. Prime Minister Joseph Muscat tweeted to say that the rate of 20.1% was the lowest since 2008.

Meanwhile, the Social Solidarity Minister said the budget measures to increase pensions in 2016 and 2017 are not reflected in the poverty figures released today.

Michael Falzon said this could explain the increase of 0.2 per cent in those at risk-of-poverty, one of the indicators assessed by the National Statistics Office. The complex set of figures released today take into account statistics for 2015. 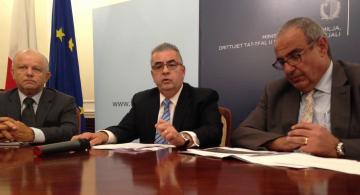 The NSO said that the overall poverty indicator - those at risk-of-poverty or social exclusion - registered a drop of 2.3 per cent.

Dr Falzon said the increase was not alarming but noted that criticism in 2015 that wealth was not reaching pensioners and those on a low income was addressed in subsequent budgets.

He said that another indicator showed that those who were severely materially deprived were almost halved to 4.4 per cent.

"This was the largest decrease among the poorest across the EU," Dr Falzon said.

One of the measures that contributed to this significant decrease was the reduction in utility tariffs a year earlier. In fact, 2015 was the first full year that families benefitted from the household reductions.

The gap between the rich and the poor is also growing. The Gini Coefficient, which measures income inequality, rose by 0.4 percentage points to 28.5

The gap between the rich and the poor is also growing. The Gini Coefficient, which measures income inequality, rose by 0.4 percentage points to 28.5 per cent, with 0 being perfectly equal distribution of wealth, and 100 being total inequality.

Based on a household’s income without any form of benefits or social support, the Gini Coefficient would go up to 44.7 per cent.

The threshold income at which a person would be considered to be at risk of poverty was calculated at €8,143 for 2016, and to €14,657 for a household with two adults and one dependent child.