The royal warrant that originally set in motion the process that led to the George Cross being put on Malta’s flag was released to the public in 1944, as front-paged by the wartime Times of Malta copy of February 23, 75 years ago today. 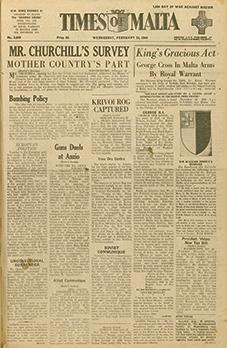 Copy of the Times of Malta of February 23, 1944, with news of the royal assignment of the George Cross in the Maltese Arms.

It announced King George VI’s “gracious act” of December 28, 1943 – the medal was awarded to the Island on April 15, 1942 – assigning “the George Cross to be incorporated in the Arms of Malta”.

Reacting to the publication of the warrant, the British governor William Dobbie had felt certain that Malta would “continue to show itself worthy of this unique honour”.

He added that he was in no doubt that the Maltese would “always serve the King and Empire with the same devotion as in the past”. In those colonial days this kind of discourse was the norm: the King was pleased to bestow his royal favour to the Island Fortress.

The fact that this gesture of courtesies was confirmed both by the Independence Constitution (1964) and its amended Republican version (1974), however, is another matter.

Iver Neumann, Norwegian political scientist and social anthropologist, believes that in post-colonial countries policies continue to be “informed by memories of the logic of the suzerain system to which they once belonged”.

One could thus understand such reasoning in the 1960s and 1970s with the general population still having fresh memories of an identity that preserved colonial propaganda props even after independence to create a sense of estimation in the eyes of the international community.

However, 75 years later – and 44 since the last Constitution enabled the possible removal of the George Cross from the flag by a simple parliamentary majority – questions could be raised regarding the Maltese perpetuated identity.

In today’s scenario one could not help but ask: are the Maltese Islands still bearing the George Cross on their flag “with the same devotion” promised to the British King and Empire in 1944, when this empire ceased to exist and the successor to the gracious king (now only of the United Kingdom) is committed to lead Britain out of the same continent the Maltese were brave in saving when they received this honour? 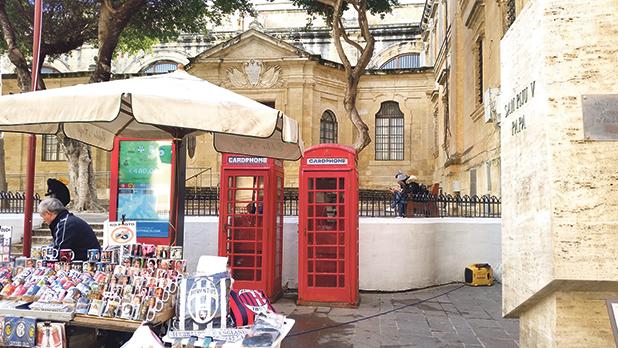 In 2019, with Malta steadfastly rooted in the peace-embracing EU, is the George Cross – a wartime relic given by the head of the Anglican Church – on the flag, which made some sense while Elizabeth II was queen of the island till 1974, still promising “to serve” its previous colonisers?

Facts and answers do not always follow the lucidity of an independent Republic forging ahead with its rationalised identity constantly recovering its Mediterranean components while steadfastly keeping the friendly relations it enjoyed with the British population, especially since World War II.

The George Cross is a historical honour all Maltese cherish but should it remain where the coloniser had assigned it as a mark of British possession?

In other words, should the war medal for bravery have left the museum, where the original decoration is deservedly revered? Which country remembers its war dead on the flag? Monuments do that.

Many learn how to turn a blind eye and forget their identities in order to survive. Others tend to become ambivalent, condemning their inferior social status yet adapting to the new social order.

The British colonisation of Malta, an odd humbling appendage considering that the rest of the Empire (with the later exception of Cyprus) subjugated non-European colonies, has left its indelible mark on the Maltese community and therefore it is no surprise that early in its post-colonial history Malta continues to keep cutting from its suzerain’s cloth.

We still operate under a Constitution that was originally drawn to fit the coloniser’s perimeters, unaesthetically mar historic architectural gems in the capital city with abundant obsolete telephone red boxes when the UK has been replacing them with free phone/Wi-Fi modern booths.

Together with certain red post boxes – notably the one belonging to Edward VII’s era at the Ferries in Sliema – they could be preserved in a museum and perhaps embellish Hastings Gardens, where most British vestiges in Valletta could be organised in a sort of colonial monumental garden not unlike Memento Park outside Budapest.

Do we still need a colonial war medal on our national colours to identify ourselves to the world?

Furthermore, in pretend colonial style, in spite of having at least six well-equipped media newsrooms, Malta still beams and streams the British public broadcaster (a professional world network available 24/7 on DAB) on our own airwaves for global news updates daily – with expected British perspective – by several radio stations, including public ones.

As if persevering colonial customs was not enough, as recent as 2015 the State, possibly unwittingly, propagated the colonial overpowering maxim ‘Empire benefits the colonised’ when it decided to entrench in Valletta’s main streets a score of crown markers representing the queen as head of the Commonwealth to commemorate the organisation’s meeting in Malta instead of the group’s logo.

Together with the King’s cross on the flag (which, unlike the eight-pointed cross, is absent in practically all other national identifiers), these colonial symbols undeniably show that their ubiquity is not historically justifiable.

German philosopher Thomas Nipperdey believes that some monarchical monuments might one day become national memorials but obviously he was speaking of a native sovereign not of a colonising one.

Several stone blazons of the grandmasters, which once adorned public places are now displayed in St Elmo; releasing the majority of public British royal insignia from Valletta would only be following a justifiable precedent in respect of the past.

This year Malta is marking the first centenary of the Sette Giugno when six Maltese protesters during a public remonstration against the sudden cost of living concurring with a national political demonstration to obtain some representative government (far from a fully-fledged democracy) were felled by British fire.

The commemoration of the event by a national day and the relative testimonial in Valletta was only possible more than 20 years after Independence. The Sette Giugno event was the climax of more than a century of harassment to deny rights to the Maltese in their own country.

According to Richard Taylor, Maltese poet and editor of Il-Ġaħan, a similar public handling took place in Valletta in 1846 when under governor Stuart’s orders “the government attacked the Maltese on the streets with bayonets”. Communal amnesia of such iniquitous colonial instances in national memory often blocks inherent Maltese identity.

Do we still need a colonial war medal on our national colours to identify ourselves to the world?

Dr Charles Xuereb is a journalist and historian.