This year, Malta marks the 15th anniversary of its debut in international rugby.

Tomorrow, the Malta Rugby Football Union (MRFU) will hold an event to commemorate the occasion. 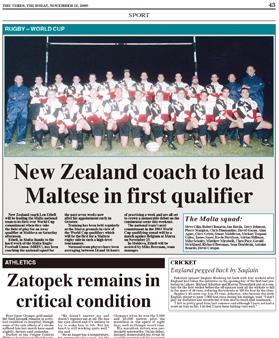 The teams, aptly named ‘The Pioneers’ and ‘The Barbarians’, will be made up of players from different eras.

The following day, on Saturday, Malta take on the Czech Republic in a European Cup Nations qualifier at the Hibernians Stadium.

It all started 15 years ago, in November 2000, when a group of amateur rugby players, led by coach Len Ethell, from New Zealand, travelled to Moldova via a stopover in Istanbul for Malta’s first ever full International Rugby Board (now World Rugby) test match.

This was to be the beginning of a remarkable, exciting and sometimes bumpy journey for the sport of rugby union in Malta.

The Malta Rugby Football Union (MRFU) had only recently been reconstituted from its predecessor, the Rugby Association of Malta (RAM), after a period of inactivity in the late 1990s.

The early to mid-1990s had seen a resurgence of rugby on the islands with the emergence of the Kavallieri, Stompers and Alligators (originally formed at the University of Malta) clubs complementing the established Overseas and the now sadly defunct Phoenicians.

While Ethell’s initial stint in charge of Malta was to prove short-lived with just the first three test matches of the 2003 Rugby World Cup qualifying round, he helped motivate the squad with the right passion and mindset.

Moldova was a baptism of fire.

The long journey, the fact that the squad were new to international rugby, the relatively short preparation time and all this coupled with facing a very fit, strong, military-trained  team of young Moldavians, the score remains Malta’s largest defeat to date at 58-8.

A consolation try, Malta’s first ever, was scored by Mick Scholey, then a player of Kavallieri.

Malta continued to improve, losing the RWC 2003 qualifiers round of games, but within a year securing an 8-0 maiden win at home to Monaco, played at the Matthew Micallef St John Stadium in Marsa.

This was to be the start of a golden period for Maltese rugby with 10 games in a row unbeaten mainly under Welshman Graham Richards as head coach and Christoffel Diamantino as captain, with a good mix of local and overseas-based players.

Sadly, after leading Malta to another victory against Bulgaria and just four games in charge, Bennett passed away in the spring of 2002.

At the request of his family, his ashes were spread at Ġnejna Bay, accompanied by heartfelt singing of ‘Swing Slow Sweet Chariot’, led by  Kavallieri.

This 15th anniversary is dedicated to him and also the memory of former MRFU president Adrian Wirth.

Richards’s reign as head coach was characterised by an 80 per cent win rate success (still the highest), growing support locally, and also the establishment of more youth and junior coaching.

His successor, Damian Neill, also a Welshman, together with club coaches and others who had ensured some continuity, was faced with the task of not only maintaining the success of the national team but also rebuilding the local grassroots.

Under Neill, who is also the MRFU director of rugby, the last decade has seen consolidation and improvement in our rankings, enhancing respect for the Maltese national team.

It’s been an amazing journey, one that has made rugby union one of the nation’s most successful team sport in terms of international competitions, with Malta constantly punching above its weight, and the show must and will go on.