Valletta as we know it has been destroyed and so have a number of beloved local landmarks. Luckily, this is only happening in David Dhalia’s and Alan Stealth’s imagination, translated to art. Ramona Depares interviews the duo about their current exhibition and their participation in Malta Comic-Con.

Picture Malta, but not as we know it... a Malta that has been ravaged by some unknown global catas-trophe, the island’s major land-marks barely recognisable.

This is what David Dhalia and Alan Stealth, who together make up the School of Bitches, have set out to do with a visual arts exhibition that opened yesterday at St James Cavalier in Valletta. 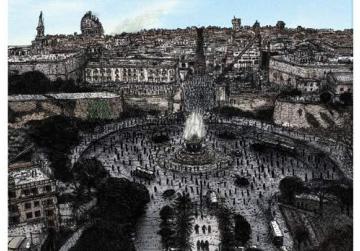 The entrance to Valletta as depiced in Genesis.

The exhibition reimagines some of Malta’s most beloved locations.

Take the entrance to the capital, for example. The Triton Fountain is still there, but it’s pretty much the only still-functioning element in the picture.

The dome of the Carmelite’s church lies, half in ruins, at the back. There is no hint of Renzo Piano’s exquisite work, while an ominous ‘SOS’ has been spray-painted on the roof of what used to be a hotel.

An image of St John’s Co-Cathedral also shows us that, whatever the cataclysmic event was, it hasn’t spared the historic building either. 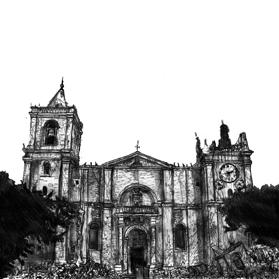 The façade of St John’s Co-Cathedral in Valletta as re-imagined in a post-apocalyptic Malta.

But, as those who follow the duo’s ongoing comic books series Genesis know it’s not just Malta that has had to bear the brunt of the disaster.

Apocalypse has happened across the board with Malta featuring in some of the stories.

I caught up with the duo ahead of their participation in this year’s Malta Comic-Con to find out more.

Who are School of Bitches – and who are the bitches in the equation?

Stealth: We call ourselves an art house, which on the surface might sound a bit pretentious. Fine, I guess it is pretty pretentious, but we use the term because everyone involved has varying and over-lapping roles, often having input across the entire creative process rather than being limited to one role.

The infamous name is actually taken from a comic that I did back in 1998. It was a crude, defiant stab in the dark at the establishment but, 16 years later, we like to think those core principles have very much become the foundation of what it is we do, if a little more refined.

You first launched your series Genesis in Malta three years ago. Why did you choose Malta as your launchpad?

Dhalia: I lived in Malta at the time when Stealth and I first discussed making the project public. He made contact with Chris Le Galle, one of the founders of Wicked Comics and we launched a preview issue at the 2012 Malta Comic-Con. We were fortunate to get our feet wet in such a friendly environment, suitably motivating us for the year ahead.

What is Genesis all about and how do the seven chapters all tie together?

Stealth: Genesis is quite literally... the story of how the world ends. The story in its entirety spans from before it does end till way after it has, employing an ensemble cast to tell its non-linear narrative.

The first seven chapters, Dei Mundi Novi – which is Latin for Gods Of The New World, deal with this as a central theme and are set after a unknown catastrophic event has struck. Each chapter introduces another character in the wake of this new world until they finally cross paths. Then the real fireworks begin.

How was the project born?

Dhalia: Stealth has been working towards this project for a number of years in some capacity with much of the framework for the overall story being hashed out as far back as 2007. The sheer scale of the story had him seek out help to fill the gaps, as he put it at the time.

The plotline deals with a dystopian scenario that is on the darker side of the spectrum even for the genre – where did you get the inspiration?

Stealth: We’ve found that a lot of post-apocalyptic fiction tends to delve into the fantastical with other worldly elements and futuristic technology often shaping the story. The inspiration for Genesis lies very much in the now. The unapologetic vision is set against the backdrop of the world very much as it is now.

As cruel as the world may seem, we imagine how much worse it would be with the ‘lights off’. Take a look at the world, even walk along the streets of your own cities and if you’re looking out for it you can see the cracks – and that’s with the lights on. The world’s broke.

How does Malta fit within the storyline?

Dhalia: Malta only briefly appears in the Genesis storyline, but our forthcoming series From the Ashes is entirely based on the fate of Malta and will be officially unveiled at this year’s convention.

A plot that spans the whole world

Last year you also showcased a number of artworks showing Malta from a dystopian perspective – which was the landmark that drew the biggest response?

Dhalia: The biggest response was probably towards the Mosta dome image.

We sold all the postcards we had of that one at last year’s convention. We do really like it, it’s a powerful image. We all have our favourites but notably, the Żona Ħadra street scene from an almost completely technical standpoint alone, is the artist’s (ie, Stealth’s) favourite.

The storyline very much brings to mind the potential of a television series. Do you ever imagine it on the small screen?

Stealth: To say we don’t see some of it play out like a movie or television series would be a lie.

A decade of serialised TV series has definitely influenced the structure of the narrative.

With that said, Genesis has always been imagined as sequential art. So it’s hard for us to see the story in any other medium.

You recently released Issue 3. What has the response been like so far?

Stealth: Issue 3 has done well. The response from readers and reviewers has been positive.

The issue was also considered in this year’s Best Comic category for the British Comic Awards in November. With the conclusion of Virtue’s Chronicles (for now) in Issue 3, those that have been following from the beginning are starting to understand the true scale of the story.

We look forward to seeing the response to Issue 4 as it takes a whole different direction.

You are also in process of launching Virtue’s Chronicles as a stand alone paperback in 2015. Can you tell us more?

Dhalia: We will be releasing Virtue’s Chronicles in what’s likely to be late spring, although a release date is not finalised.

The paperback will feature Virtue’s Chronicles in its entirety, collecting all five parts (currently only the first three parts are available), revealing the shock-ing conclusion to James and Sam’s journey through post-apocalyptic Gloucester.

One thing that marks Genesis out is the complexity of the plot and the interconnection between the stories. Will those who don’t follow the whole project be able to enjoy the paperback on its own?

Stealth: Yes, we think so. The chapters are all connected, but each one contains a complete story in its own right with its own themes and style.

There of course will be a point where a new reader might be at a disadvantage to a long time reader, but it’s the desire to see the whole picture that we hope will encourage new readers to go back and catch up.

Given that the story is so complex and seven volumes are planned, is the story arc actually already finalised?

Stealth: Genesis has a definite end that won’t be changed. Despite the vast expanse of its setting, this story is very much character driven.

It is this story Genesis follows and for everything the characters go through in their journey there is an ensuing closure.

Earlier this year you were shortlisted for the Best British Black & White Comic, True Believers Awards. What was your reaction to this? Can you tell us more?

Stealth: We were shocked when we found out as we hadn’t been notified we’d even been considered, let alone shortlisted. It was a good feeling of course. With the project still in its relative infancy, to receive critical recognition is humbling. When you spend all your time working on the project, you often forget that there are actually people out there reading what you produce.

What are the plans for this year’s participation at Malta Comic-Con?

Dhalia: We have a busy convention ahead of us. It will be the first time Issue 3 is available in Malta and we are also releasing Issue 4 and launching Premonitions, the prelude of From the Ashes.

We are also exhibiting the range of Maltese landmarks envisioned within the world of Genesis. To those in attendance, keep your eyes peeled and you might just see Issue 4’s protagonist, ‘Anthony’ among the crowd.