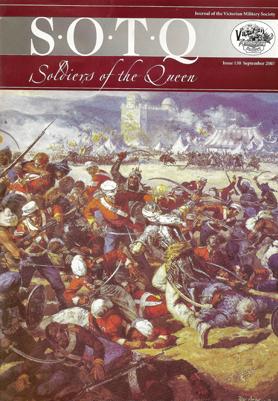 Front and back covers of Soldiers of the Queen, Journal of the Victorian Military Society, September 2007.

Throughout this year the world commemorated the first centenary of the outbreak of the First World War and, for us in particular, the important role played by Malta in ‘the war to end all wars’ as the ‘Nurse of the Mediterranean’, whose many of its sons fought and died in the ranks of the British and Colonial armed services.

There are many accounts of Maltese having died in battle or drowning on a sinking ship, yet there are those few whose death resulted decades earlier and on the battlefield of some foreign land.

December 21 is another commemorative date; the day in which Captain Rinaldo Sceberras died in battle. Being a Maltese officer of a British Regiment of the Line, a rare opportunity even then, I feel that it is my duty to relate who was Rinaldo Sceberras and the events which led to his heroic death.

Count Camillo Sceberras first arrived in Malta in 1798 while serving with the French expeditionary force en route to Egypt and was soon elected as a member of the Municipality of the West. After the capitulation of the French in 1800, he departed the island and served as a captain in General Mayer’s Staff Corps of the French republican army in northern Italy. It was while in this service that he met and married Maddalena Ravanelli, the daughter of a rich Milanese family. 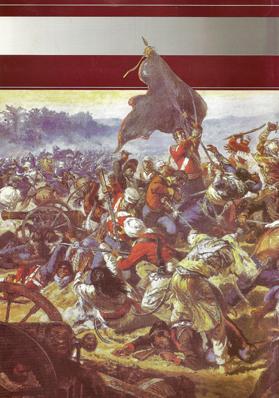 Rinaldo was born in 1808 in Milan, the eldest of 12 children. After terminating his military career, Camillo, now a count, returned to Malta with his family and began to involve himself in the local social and political situation.

Young Rinaldo had inherited his father’s military ambitions and soon showed a strong interest in the heavy military presence in Malta, in particularly towards the 80th (Staffordshire Volunteers) Regiment of Foot. The Regiment formed part of the garrison troops in Malta from June 1823 to September 1828.

Soon after his appointment, the 80th Foot, composed of 17 officers, 29 sergeants, 10 drummers and 482 rank and file departed Malta on the 8th and 11th September. Their destination was Corfu in the Ionian Islands, which belonged to Great Britain at the time.

During the passage, the troopship called at Malta which enabled Rinaldo to visit his family. Little did they realise that this was to be the last time that they will ever meet

Following a short posting in Cephalonia, the regiment was ordered to return to England in 1830. During the passage, the troopship called at Malta which enabled Rinaldo to visit his family. Little did they realise that this was to be the last time that they will ever meet.

The 80th Foot spent six years of home service, mainly stationed in Boltan, Belfast, Manchester and Chatham, during which Sceberras was promoted to lieutenant on April 16, 1833.

In March 1837 the regiment, now commanded by Lieut. Colonel N. Baker, was ordered to embark to Australia on a tedious voyage of many months around the Cape of Good Hope and across the Indian Ocean.

On arrival at Sydney, the regiment was assigned over convict gangs who were employed in detachments in various localities in New South Wales, Van Deimen’s Land, as Tasmania was then known, and in the Norfolk Islands.

For some time, Rinaldo was in charge of the Wingello Stockade some 50 miles away from Goulburn, which served as convict accommodation during the construction of the Hume Highway by the convicts. It is still the main link between Sydney and Melbourne.

In 1841, the 80th Foot was sent to New Zealand where a number of companies were to remain. The rest of the regiment returned to Sydney in the following year with a strong contingent in Windsor and Parramatta.

Sceberras’s own company was stationed at a settlement called West Maitland, on the banks of the Hunter River, in the Hunter Region of New South Wales some 110 miles from Sydney. The name Maitland, not to be confused with that of Sir Thomas Maitland, refers to Sir George Maitland, Under-Secretary for the Colonies and MP for the borough of Whitchurch in Hampshire, England.

Due to the dedication to his position and fairness towards both the convicts and locals, Rinaldo was much respected and regularly attended functions held by the local communities. 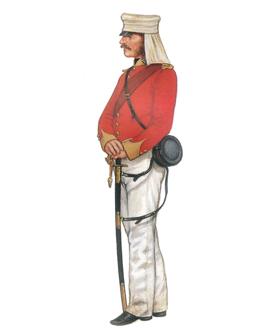 In 1842, while in Sydney, Rinaldo met Jane Platt who was from Morpeth. They later married and made their home in that town.

Jane was the daughter of the late Lieutenant John Platt, Superintendent of Ports and who was being cared for by a prominent figure in Sydney, Edward Charles Close, builder of a local church dedicated to St James.

The couple did not have any children.

On March 17, 1843 Rinaldo was promoted to captain and adjutant of the regiment.

During 1845, the 80th Regiment was called for service in India and, with great regret, the communities of West Maitland and Sydney prepared to say farewell to this popular officer. They presented him with a silver vase and plate, having an inscription engraved on its ebony base recording the town’s deep appreciation for the services given by him in both a military and a civil capacity while in service in the garrison. The vase later became the most cherished heirloom in Jane’s drawing room.

The Regiment sailed for India on August 12, 1844, arriving in November 1844. During the voyage, one of the detachments was marooned on Little Andaman Island for some months after the ship that they were on was wrecked. 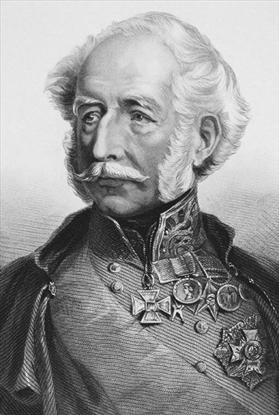 Captain Sceberras was attached to regimental headquarters at Fort William in Calcutta but later moved with the regiment to the Upper Provinces, arriving at Agra in March 1845. The next move was to Ambala in November and later into the field with the Army of the Sutlej, which was under the command of General Sir Hugh Gough.

Captain Sceberras was present at the battle of Moodkee (Mudki) and survived unscathed. The retreating Sikh force was followed by General Gough towards Ferozepore which brought about the battle of Ferozeshah, fought three days later on December 21, 1845.

The Sikhs held their position and the first British attack was repulsed with heavy losses. During the following morning, a second attack by the 62nd and 80th Regiments of Foot broke the Sikh lines with a furious bayonet charge which ‘carried the day.’

An eyewitness report recalls the charge which led to the death of Captain Rinaldo Sceberras as follows: “I saw with surprise a large body of Sikhs all clad in chain armour, rise from the ground and attack our people hand to hand. Captain Sceberras seized the [Sikh] standard and immediately fell. Captain Best next rushed to it, but was also cut down. Sergeant Browne, a young married man next took it and shared a similar fate. The touch of that standard seemed fatal but no sooner was it down, than another seized it. Finally, Sergeant Kirkland of the Grenadier Company got it and kept it, although severely wounded.”

The standard, or colours, represents the regiment to which the men belong and, apart from parading, it is followed into battle as a means of recognition and soldiers would rally around it to protect it. It was a great source of pride and victories or defeats were often expressed in terms of colours being captured from or lost to the enemy.

Colour Sergeant Matthew Kirkland’s capturing of a Sikh black standard at the battle of Ferozeshah is an achievement still commemorated by handing over the regimental colours to the Sergeants’ Mess on the anniversary of his battle.

Captain Rinaldo Sceberras died aged 37 and was awarded the Sutlej Campaign Medal 1845-46 with the inscription “Moodkee 1845” and the bar “Ferozeshah”.

I saw with surprise a large body of Sikhs all clad in chain armour, rise from the ground and attack our people hand to hand. Captain Sceberras seized the [Sikh] standard and immediately fell

His name is recorded in various monuments although his surname is not always spelt right. In a memorial in St Andrew’s, Ferozeshah, it’s ‘Captain Rinaldo Scheberras, 80th Foot’.

Another memorial is in Lichfield Cathedral in the North Midlands, in which he is listed as being killed ‘with Captain Best and Corporal Browne ...’ during the capture of the black Sikh flag and also on a white marble tablet at St James church in Morpeth. 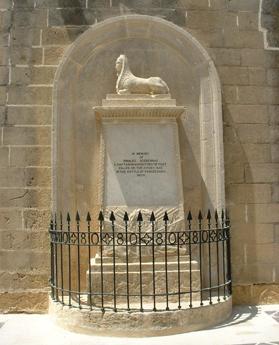 The memorial to Rinaldo Sceberras at the Upper Barracca as in 2004.

A monument to his memory was erected at the Upper Barracca Gardens, funded by his brother officers of the regiment. The monument consists of a pedestal in the shape of a tapered Egyptian column. At the front of the base is a trophy of arms with the regimental number ‘80’ within a wreath at the centre, much of which has now weathered and is unrecognisable. The inscription on the large marble plaque reads:

“In memory of Rinaldo Sceberras. A captain in H.M. 80th regt of foot. Killed on the 21st December 1845 in the Battle of Ferozeshah, India.”

The top of the pedestal has a cornice of Egyptian design, above which is a sphinx, also badly damaged, which again denotes the regiment’s connection to Egypt in 1801. At the front of the memorial is a curved iron palisade railing with the numbers ‘8’ and ‘0’ set individually between each barb, to denote the regiment’s number.

An officer and a sergeant of the 1st Bn. The Duke of Edinburgh’s Royal Regiment laid a wreath at the foot of the memorial on December 21, 1963, to commemorate Rinaldo’s death. On the same day in 1994, a similar short ceremony was held at which Ray Bondin, members of the then Moviment għall-Ħarsien tal-Ambjent Storiku and I, paid tribute to this fallen hero.

Rinaldo’s youngest brother Attilio was also commissioned into the 80th Foot on April 21, 1846, becoming adjutant in 1853 and was present in the suppression of the India Mutiny in 1857. His military career continued as captain in the 98th (Prince of Wales) Regiment of Foot and colonel and its commandant in 1878.

Attilio retired from the army in 1880, taking up the post of Superintendent of the Malta Police Force. He retired his post in 1884 and moved to Naples with his family where he suddenly died shortly afterwards. A bronze plaque erected by his brother officers of the regiment commemorates Attlio Sceberras at St Paul’s Anglican Cathedral in Valletta.