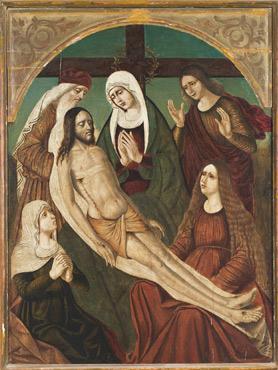 The Deposition by Antonello da Messina.

Although Antonio de Saliba was apprenticed to his cousin Jacobello d’Antonio during the later years of the 15th century, his paintings bear a strong connection to the work of his uncle, Antonello da Messina, one of the leading exponents of the Italian Renaissance movement. Jacobello was Antonello’s son and artistic heir.

This will be the central theme of a public lecture by Charlene Vella. The lecture, In the Footsteps of Antonello da Messina: Sicily, Venice and Malta, is being organised as part of the 2013 Lecture Series by the History of Art Department within the University of Malta.

“Antonello da Messina was a great master of the Italian Renaissance period who effectively managed to blend together Spanish, Flemish, Venetian and Italian art, making him an artist who was way ahead of his time,” explains Vella, who is currently researching the subject for her PhD in History of Art at the University of Warwick in the UK, and is assistant lecturer in the History of Art Department at the University of Malta.

“My studies are particularly focused on the school of Antonello da Messina, and during my research, I have managed to trace a number of important works from this school by Antonio de Saliba who turns out to have spent some 15 years studying and painting in Venice, and some of his works are also found in Malta.

“One such important work by Antonio de Saliba is The Deposition dated 1515, located at the Church of Santa Maria di Gesù in Rabat,” added Vella.

In the Footsteps of Antonello da Messina: Sicily, Venice and Malta will be held at the church of Santa Caterina d’Italia, Valletta, on April 30 at 6.30pm. Entrance is free.