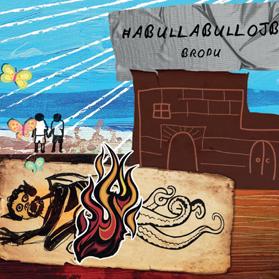 Happily, music in the Maltese language has made a comeback and I’m not talking about the festival sort of entries that are churned out year after year.

Brodu’s album Ħabullabullojb achieves exactly this. Using the Maltese language in a way that manages to make the Malti tat-triq (street jargon) poetic, the album presents a crossover of genres that include hip-hop, metal, jazz, rock, marċi funebri (funeral marches), ska and even a bit of pop.

Does that sound to you like too much, like the band is not sure about where it’s going with this? You would be wrong. Against all odds, the mishmash of styles works beautifully and it’s only after you have finished listening to the album that you find yourself questioning how this was possible at all.

Because while you’re listening to these tracks there is no chance that you will be thinking of anything else but the sheer poignance, beauty, sadness and even satire of these works.

With each track you will find yourself straining to make sure you understand all the lyrics.In this album the story behind each track is a priority and it definitely is not just about the musical arrangements.

I would go so far as to say that those who have trouble understanding Maltese properly will find it impossible to fully appreciate Ħabullabullojb. For those who need some additional help, lyrics can be found on www.brodu.eu.

The album has a very strong feel of what, for want of a better word, I will call ‘existential angst’ and even when the music itself is at its most upbeat the themes remain dark.

The introductory track, Fejn Hu il-Ferħ, with its distinct punk feel, and Fil-Bosk (with Denis Abela on drums), are both good examples of this. The arrangements are light, simple even in contrast to the heaviness of the stories unfolding in each track.

Fil-Bosk is one of my favourites entries on the album, mostly thanks to its fairy tale quality. It’s almost like a Grimm’s fairy tale set to music with its jaunty opening “Kont miexi ġo xi bosk u nara bniedem għaddej/Għedtlu “ħares intlift, inti fej sejjer fej?” (I was lost in the woods when I came across someone).

Of course, you get the feeling that this is but an analogy for something much darker, particularly thanks to the ending, to which I gave a sinister interpretation: “U f’daqqa waħda bdejt nisma għajjat ta’ festa/U ħadt ir-ruħ għax fhimt illi dal-vjaġġ kien tlesta” (finally I heard the sounds of feasting and I was relieved that my journey was over).

Of course, the words can also be taken at face value and this ambiguity is also part of the attraction of the track.

The album continues with Kemm Jiena Cool, possibly the most eclectic work of all, veering from jazz and funk to doom metal from one riff to the next.

The track gives me the giggles everytime I listen to it, with lines like “Nixtri l-kafe’ tal-kummerċ ġust, u l-ħalib tal-baqar kbar/ Nistudja l-arti, l-filosofija, w ta’ kuljum pornografija” (I buy fair trade coffee and milk from cows that aren’t too young/I study arts and philosophy and everyday pornography). Too many people I’m acquainted with spring to mind with this epic character send up.

Il-Gaffa Hymac (featuring Justin Galea on flute) and Sieħbi Jħobb il-Lejl follow, both replete with social commentary about materialism as a malady and the social inequalities it fosters, the second also tinged with an underlying current of regret at the way the singer perceives that he should have offered more help to a person close to him.

Iċ-Ċimiterju is the most poignant song on the album, a ballad to resignation that doesn’t quite question the meaning of life and where we are headed, but simply accepts that we are all headed in the same direction and that we are never too far from the grave.

Ix-Xgħajra, with minimalist vocals by Nadine Axisa, is a haunting piece that is almost an interlude, a palate cleanser with no lyrics.

In fact, the musical mood, though not the theme, changes abruptly with Ma Tridx Tmur mal-Feeling, an essay in doom riffs, punk arrangements and some really evocative għana by Tony Spiteri Tal-Ġebel. Tħeġġiġni u Toqtolni is a beautiful ode to love, or obsession, or maybe even addiction.

Another ballad follows, L-iSmack, one that requires no interpretation so chillingly matter-of-fact it chronicles the realities of addiction. L-Orient – with arrangements by Troffa Ħamra and the participation of KażinSka, Andrea Spiteri on the eufonju, Ian Schembri on the alto sax and Francesco Sultana on the kuartin – is a prime example of what a good collaboration between like-minded musicians can achieve. I never thought the sounds of the traditional funeral march could be employed so beautifully in a contemporary piece.

The album ends with three tracks in English: Cinderella (featuring two musicians from For Strings Inn; Herman Spiteri on vocals and guitar and Kim Farrugia on guitar); Feeble (Spiteri on vocals, Farrugia on guitar and Manuel Ciappara, ex-Totema, on acoustic guitar and Graces Street (Ciappara on guitar). All three are rooted in punk, except for Graces Street, which is more of a folk ballad... and are valid works in themselves, but for me failing to stand out as much as the rest the album, maybe because I found the intensity of the Maltese language more appealing.

Ħabullabullojb is a tour de force of an album that, once you’re heard it, is pretty impossible to get out of your mind.