Satirical writer Wayne Flask returns to the public eye with the launch of his debut novel, Kapitali, a true-to-life frolic that throws new Labourites, Nationalists and shadowy businessmen into one melting pot of dark humour. Interview by Ramona Depares.

The name Wayne Flask is certainly not a new one when it comes to political satire. The brains behind the now (sadly) defunct Satiristan Facebook page, Wayne had pretty much the whole of Malta eagerly awaiting updates from a rather feisty ‘Mullah’ who seemed to be suspiciously familiar with Maltese politics and current affairs.

The amount of bets that were won – and lost – with respect to the real name responsible for the page were something of a pop culture phenomenon.

It didn’t take too long for Wayne’s name to resurface in connection with the ‘s’ word, this time with his first attempt at writing a drama – Sibna ż-Żejt. And – while it is true that the play ended up mired in controversy – mostly thanks to disagreements between producer and cast – the play itself was a major hit, playing at a packed Manoel Theatre.

INTERVIEW: 'Beyond the comedy, there is the message'

Now, Wayne is back with Kapitali, his debut novel that centres around two, very particular, Maltese characters and the shady world they inhabit. No surprises for guessing that Wayne has, once again, turned the phrase ‘political satire’ on its tail, giving readers a work that mirrors real events in Malta so closely that one begins to wonder. Knowing that the book was written well before the last election period, the question begs itself: is Wayne possessed of some sort of crystal ball that he predicts political shenanigans so disturbingly accurately.

“Hardly. If you are familiar with political goings on in Malta and you follow the scenes closely, you really can’t help joining certain dots. You don’t need to be a genius, the next step is pretty obvious,” he says.

Which maybe explains why so many of the characters and scandals in the novel will ring a dozen bells in readers’ minds. Without giving away too much, the book presents the idea of a shadowy puppetmaster, viewed as above suspicion, pulling the strings of both political parties. The series of events that unfolds is funny, but also worrying. 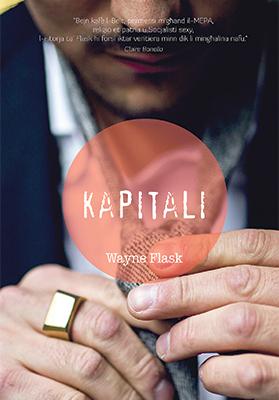 And, while the main characters are fictional, the book makes reference to a number of real life public figures – that we all know – and not very flatteringly either.

“I have a very good lawyer,” Wayne quips when I ask if he is, in any way, nervous about how these people will react. “And anyway, we are supposed to live in a free country, so why should I be anxious at writing something that ridicules a public figure? We need to move away from this idea that politicians are untouchable.”

He tells me that one of the things that seriously upsets him is the way few artists are invested to making their views about whatever is happening in Malta known.

“I’m not talking only politically, but even from an environmental perspective. Very few Maltese artists speak out about the corruption, the under-the-table deals, the environmental disasters that are happening... the Not In My Backyard syndrome is still very much alive,” he continues.

I ask him what he thinks of that old saying, that satire pretty much writes itself in Malta. He agrees, but only to a certain extent.

“The comical kind of satire writes itself, because it is kind of obvious. The deeper satire, very few people bother with that.”

Very few Maltese artists speak out about the corruption, the under-the-table deals, the environmental disasters that are happening

“No. George Orwell’s 1984 is highly satirical and it is far from funny. The topics where one needs to dig deeper – those certainly don’t write themselves and very few bother with them,” he insists.

“But the serious stuff needs to be written, too, even though people do not seem to be very much inclined towards reading it. I find it unacceptable that most of Malta’s supposed big brains choose to stay quiet about what is happening around us. Do they not care? Are they afraid? Whatever the reason, it’s not conducive to a healthy society.”

He adds that the discussion that takes place in Malta is purely superficial, with many ignoring the real topics that make a difference.

“Planning is the dirtiest game in Malta. The Panama Papers are only the tip of the iceberg, yet that is what people will mention and remember.”

And it’s not just the politicians, either, he adds. The business sector is just as bad but largely ignored by satirists and by the public itself. Politicians, he tells me, no longer target voters, but business people.

“The Labour party would have been very unlikely to win two elections in a row, had it not been for the support of certain business blocs. The same was true of the Nationalist party, before; and Adrian Delia’s main mission is to bring big business back to the PN’s fold. The civil rights issues are mere smokescreens.””

He tells me how this relationship between politicians and businessman has rarely been explored in Maltese literature, citing Alex Vella Gera’s Sriep as an inspiration and an influence.

“We have stopped producing gentlemen in politics. Politics has become a revolving door that paves the way for a career in something more lucrative, such as the financial services.”

He believes that this is not limited to Malta, but is more of an international phenomenon. Kapitali makes reference to all these topics Wayne mentions during the interview, with the (hilarious) plotline hiding a deeper, darker allegory.

“Kapitali is a fictional novel, with a narrative that is easy-to-follow, with things that are happening on the side. I suppose the biggest challenge was getting facts about the financial services industry in Malta is not exactly the easiest thing.”

What about a possible sequel? Wayne doesn’t discard the idea.

“Yes, I have thought of it. There are still ways where Kapitali could be further developed. Then again, I also would like to do something different next time, maybe something lighter. One needs a break, after all.”

What about more theatre? After all, that is where this writer’s public debut happened. But Wayne doesn’t seem to be too favourable to the idea.

“For starters, I need to distance myself from Żejt. There are so many things that I would have done differently with the benefit of hindsight. The last thing I want is for people to read Kapitali within the context of Żejt. The two are very different projects, in approach, topic and humour,” he replies.

Kapitali is published by Merlin Publishers.