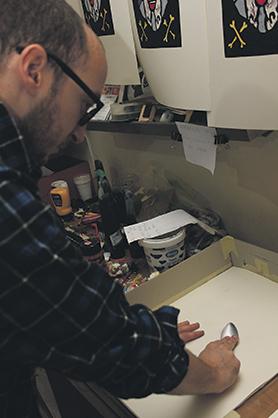 In my most recent encounter with the work of Ryan Falzon, a series of 14 lino prints telling an allegorical story, I have decided to use an unusual analogy and compare it to an onion. Yes, an onion. Not because it makes you cry, but because of the many layers which construct the vegetable.

And, is exactly how Falzon has conceived and created his work... through layers. Those physical layers of the lino print technique, but more significantly through the several layers rich in social, political and personal connotations (some more subtle than others), which weave in and out of each other and are expressed through the artists’ individual style. In his latest exhibition titled Quick Fix: A Morality Tale, these layers demand your engagement. Yet, one might find this morality tale to be anything but an Aesop’s fable.

Falzon’s prints tell a contemporary fable of a petty thug through his violent journey in search for fame, fortune and heroism and the consequences behind them. The artist consciously soaks his narrative within a local context, highlighting particular events from the island’s history and other universal themes.

The series is supported by short extracts which accompany each print and are written by the curator Michael Fenech. Fenech has also used the ‘onion method’ of layering his language to give the audience a simple descriptive sentence whilst also prompting references and posing questions. Although some may deem these extracts disruptive, they have, I believe, enhanced the overall experience by smoothly guiding the viewer through the tale yet encouraging him to constantly look back at the works in search of answers. 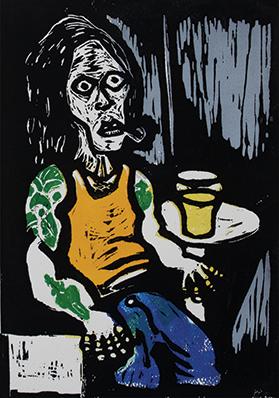 Speaking with Falzon, who is so cool, calm and collected and yet, whose art is so bold and brave, he tells me how it is inconceivable for him to create work which does not comment, criticise or reflect in some way his context and experiences. However, Falzon is subtle in doing this and, in an age where knowledge has become so acces- sible through technological innovations and, where we constantly refresh our newsfeed every 10 minutes, he does not wish to create images and symbols that spoon-feed or scream the obvious.

Instead, he has built his own iconography that may, at first seem, to touch randomly on many components. But, a closer engagement reveals an intellectual and deliberate construction of the image. Falzon is also one of the very few young local artists whose art consciously comments on politically charged themes, which seems ironic for an island which can offer the artist so much political material.

The medium through which the artist speaks is the lino print. Forming part of one of the oldest traditions of relief printmaking, it is a humble medium indeed in the way one takes a print, using no machinery but simply the back of a spoon. Moreover, as pointed out by the curator, it may not seem the most appropriate method to bring out the subtle details of Falzon’s concept.

A highly-personalised style reminiscent of the woodcuts of German expressionists

However, I feel that it is truly the fitting medium for this series as it physically requires the artist to build his final image through a succession of layers of the different colour registrations, creating a relationship with the many other immaterial layers of Falzon’s work.

He has succeeded to bring out the subtlety of his concept by employing his medium in a painterly fashion, using this linear technique as if he were painting. These successes have allowed for the creation of a highly-personalised style reminiscent of the woodcuts of German expressionists and, perhaps conceptually, even Honoré Daumier, amongst others. 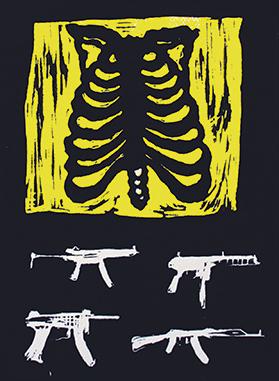 Falzon also infuses the pop idiom with his medium, telling me how “pop is print”, clearly referencing the production of images in pop culture and the subversive element present in both. The very creation of printmaking essentially allowed for images to be widely distributed to the public. However, it is interesting and, perhaps, somewhat ironic to point out how history’s earliest prints were holy pictures whose function was plainly religious.

At the same time, however, through the invention of print, playing cards were also created. I cannot help point out the contrast between the ‘fate and fortune’ elements behind this invention which tie in interestingly with the concept of this exhibition.

The prints on display are full of artistic references and borrow influence from as far back as the Byzantine icon to Otto Dix and pop imagery. However, there is also a conscious conceptual relationship with Hogarth’s A Rake’s Progress; a set of eight paintings which were later engraved, and also the more contemporary work of Grayson Perry’s series of tapestries The Vanity of Small Differences.

Moreover, everything that features in Falzon’s prints has a well-thought-out meaning. From the beginning to end; from the image of the young butcher to the uncertain saint, the prints are in constant conversation with each other, cross-referencing symbols, colours, shapes and meanings. 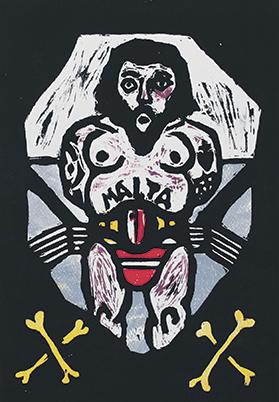 Beginning with a lino of the tale’s hero as a young butcher, Falzon immediately sets the tone and palette of his story. The Christ-like image of the young man is covered in blood, surrounded by instruments of violence and standing in front of a gruesome display of hanging meats.

The series continues to exhibit the thug’s climb towards success – his first crime – an image of weapons and a crown of thorns full of promise of heroism; his coming of age – a self-assured, freshly tattooed 16-year-old; and his rise to power in a print labelled Target Practice which, in my opinion, is one of the exhibition’s most powerful images. In this print, the hero confronts the viewer head on, pointing his recently acquired weapon of authority and staring menacingly.

He is framed within an almost Christian reredos, flanked by symbols not of saints but sins – his drug and beating heart. The lunette above him could be half a target, a halo or the rays of the monstrance.

Along with his horseshoe buckle, this image presents us with a dramatic play of symbols but Falzon adds a further layer. By placing the eight-pointed cross on the shirt of his protagonist the national hero, the artist is directly referencing the political violence of the 1970s and 1980s in Malta.

The hero goes on to reach his ambitions and becomes a national hero of this Wild West, where in “a nation that hankers for heroes” no one dare challenge him. Until, of course something goes wrong. Somewhere past half way of the exhibition, the hero experiences a car bomb gone wrong.

Again, layering his print with historical and political connotations, as well as repeated visual elements from previous plates, Falzon begins the spiralling downfall of his character. The prints that follow are the darkest, thus revealing how even colour plays a meaningful role in this story.

The representations of mem-ento mori, which makes me recall Falzon’s past exhibition, Ex Voto, held at the Maritime Museum, is yet another tool the artist uses to layer these final images, reminding us that life is short and ambitions are doomed to frustration. 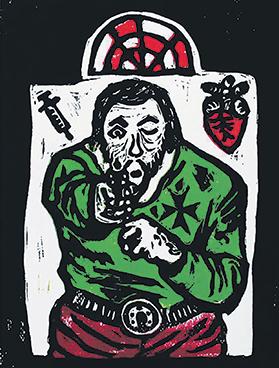 The final two images present us with symbols that usher an array of questions and sticking to Falzon’s philosophy, I feel one must attend the exhibition to see how the artist has decided to conclude his story.

Taking a step back from the enticing world of this morality tale, I cannot help but wonder if the violence and egoism, so palpable throughout this exhibition, is a reflection of the violent and ego-centric society we live in today.

Moreover, in an artistic context, I am also left wondering whether the power of the image, which some might say has overcome the power of the word, has really any power left. If the present world is bombarded by so many images and words, is it possible that we are losing the ability to connect with their true meaning, whether subtle or not?

This exhibition stimulates much thought and through the genuine relationship between artist and curator, both Falzon and Fenech have succeeded in creating a unique and holistic experience.

Quick Fix: A Tale of Morality, organised in collaboration with Heritage Malta and supported by Fondazzjoni Kreattivita i, runs until February 3 at Heritage Malta, Melita Street, Valletta.