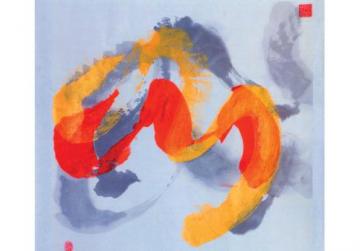 Sun Zhen Yu’s works are based on Chinese character art.

Works on display at the Auberge d ’Italie, in Valletta, offer a very different take on Chinese art from the traditional forms we are accustomed to.

Sun Lian Gang is a contemporary artist while Sun Zhen Yu bases his pieces on China’s ancient art of calligraphy.

Mr Yu practises what is known as the neo-classical Chinese character art, which consists of characters in a variety of different forms of writing.

The exhibition, which consists of 50 works, was inaugurated by Chinese Ambassador to Malta Cai Jinbaio and was organised by Juheng Chen, chief representative of the Asia Art Funds in Malta and the EU.

This is the first time the Asia Art Funds is holding a contemporary art exhibition in Malta.

Mr Cai underlined the importance of cultural exchanges in building a stronger relationship between China and Malta since the two countries established diplomatic relations 40 years ago.

He said that despite the big differences between the two countries, both enjoyed a long history and a rich cultural legacy.

The Maltese government welcomed more cultural exchanges between the two countries and hoped to see more Chinese artists bring their works to Malta, he said.